On a rail replacement bus service to Woking so I can get the train to London for Metal Matsuri. Currently trying to repair an arm with brass rods because RG kits are STUPID!!!

2nd picture is the Chelsea fans. I know you live a bit too close to Portsmouth, but not in Portsmouth, so not technically a Skate, but if you support them then oh dear

I may be a Chelsea fan (through my dad), but I'm still Southampton born and bred when it comes to the city rivalry.
Last edited: 6 October 2019

Watching Japan-Scotland in the Rugby looking good for Japan at half time.

Excellent game. Looked like Scotland might make a come back at one point, but Japan held out. South Africa in the quarters next.

AUKN Staff
About to watch Joker. Getting ready to go crash at my mates place before we head off to EGX tomorrow!

South Africa just too strong in the end for Japan.

On the train going to London for Comic Con. Listening to Babymetal and was able to buy tickets for Your Demise next year. A good morning so far.

I'm testing out my new bandwidth speed from my internet provider - the cable company here tends to upgrade my speed for free about every two years or less. I've been paying the same price for the last 6 years for high speed internet . I started out at 30 Mbs years ago, then they upped it to 60 Mbs, then 100 Mbs, and now 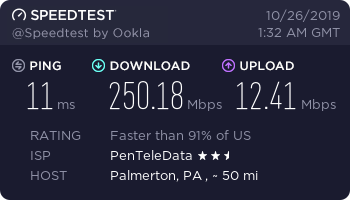 They offer 1 Gbs service here as well - tempting, but it's $50 per month more than what I am paying for this, so I don't think it's really necessary.

Waiting on a train that's one stop away from home but won't leave because they are waiting for a new conductor who's late. Every day going home from MCM I've had a delay like this. I am getting so wound up and annoyed. It's been over half an hour already with no sign of moving on.

Arrrrggghhh! Found mold on my window sills then moving stuff around realised it was also creeping up my bookcases! Bottom two shelves of all four which have plenty of books/manga/blu rays/dvds. What a chore. Doesnt seem to have got too bad and seems like none of my stuff is damaged and could just wipe down the shelves.

Dont have time to do a proper fix as leaving soon to go to Bristol for the weekend but next week will have to take everything down and get in behind them for a proper clean. So annoying.

Spent the day putting in an extra workbench with some storage. When the room is only 7ft X 6ft, space is premium. Now to bury it in crap Fighting some chest infection, no GPs just I’m used to them, they often happen when I catch something from someone else and a cold was going around work in the week

other than that, picked up Re:CREATORS on amazon video (as usual from AmVid, I can’t find a proper release) and when The Brother came in from work he said he thought of an anime where the characters compete by cooking... haven’t heard of that before... certainly haven’t… who said season 4?
You must log in or register to reply here.
Share:
Facebook Twitter Reddit Pinterest Tumblr WhatsApp Email Link
Top