AUKN Staff
Hoshigami is driving me insane with the need to grind and its broken levelling system. I will continue (even though I dislike the game) just to say I finished it.

Most interesting game in development imo. They're so proud of their vaginas, after all.
Last edited by a moderator: 7 August 2016

Precisely how, when and why does one "super cancel"? These delicate double-quarter circles seem to grant my foes ample time to defend themselves pre-emptively.
M

The last deadly descent on SSX is a bastard. Very bastard indeed!
M

I don't really have the time for this, but I finally got around to starting up my re-playthrough of Metal Gear Solid 3, although this time in the HD collection. I forgot just how good this was and it's probably my favourite of the entire series. Also my memory for remembering where every Kero-tan is surprises me.

Also on my commute i'm starting the behemoth that is Disgaea 3: Absence of Detention for the Vita, whilst spending my evenings in bed with a replay of Apollo Justice: Ace Attourney. I'd forgotten that I beat the first 3 Phoenix Wrights a few months ago and stopped in the middle of AJ (kind of ironically to re-play Ghost Trick!) but it's nice to go back. Really hoping Gyakuten Saiban 5 is Phoenix though...
M

MercenaryRaiden said:
I don't really have the time for this, but I finally got around to starting up my re-playthrough of Metal Gear Solid 3, although this time in the HD collection. I forgot just how good this was and it's probably my favourite of the entire series. Also my memory for remembering where every Kero-tan is surprises me.
Click to expand...

Someday, you will feed on a tree frog.

Zin5ki said:
Precisely how, when and why does one "super cancel"? These delicate double-quarter circles seem to grant my foes ample time to defend themselves pre-emptively.
Click to expand...

In which game? Super Turbo? If you just mean when to use a super on its own, there are three "standard" times you will see them used I would say: When you have baited your opponent into doing a slow move, or one that is punishable on block (like if you block Ryu doing a dragon punch, you can super him on his way down); When the "chip"/block damage from the super will win you the round even if it does get defended; When you think the opponent is going to press a button, and your super will come out faster/be invincible. So, if you think they are going to attack you after knocking you down, or if you think they are going to be trying to break a throw when you are up close to them.

If you do actually mean "super cancel", you have to buffer the quarter circle or whatever motions into another move, and time the attack button press to "cancel" into the super as the first move hits.

AUKN Staff
After some time levelling up my melee fighters I'm still not enjoying Hoshigami at all. I decided to check a review to see if things improve (why didn't I check before buying the game! No more impulse purchases!) and I read this: http://uk.gamespot.com/hoshigami-ruinin ... w-6173750/

"You need to periodically stop and level up in towers specifically created for level grinding, because as difficult as Hoshigami is, leveling up your characters and coins is more important than smart battlefield tactics. You will also discover halfway through the game's sixty or so hours that it is incredibly imbalanced. If you make the mistake of putting more effort into standard weaponry, you are in for a rude awakening and likely to throw the game away in disgust: Coins are essentially the only way to finish the game, and about twenty-five hours in, your melee fighters will be useless."

So I decided to stop playing. I'm starting Chrono Trigger.

Ah, Chrono Trigger, when will they make another JRPG as fine as you...

Corpse Party on the PSP. Started playing it a few days, ago and so far I'm on chapter 3. Been really enjoying the game so far

The soundtrack is awesome, and when playing late at night it adds more creepiness.


In chapter 2, when that ghost child was chasing you, that really spooked me out since it reminded me when I played Metroid Fusion, where the SA-X spots you and starts chasing you
Last edited by a moderator: 7 August 2016 Not long finished The Walking Dead: Episode 1 have to say, I quite enjoyed it and now I'm stuck waiting for a while for the next Episode which I can't wait for, there were a few moments of lag but overall good gameplay in a style which I haven't really played personally since Heavy Rain first came out.

Back to Yakuza 4 for now though to pass the time, just finished part two on my first playthrough.
C

Just finished up Resonance Of Fate for my 1000g. Such a great game, a very long grind for the gamerscore though.

Starting up The Darkness II, hope it's as good as the first.

Moderator
TecmoKoei had revealed recently that there was set to be a tournament at the May Expo for Dead or Alive 5, so in preparation for that, i've been playing my DOA5 alpha demo for a couple hours a day to get used to the new mechanics, and of course, get back used to DOA. I'm so gonna go full out with this tournament. Liking some of the combos Ryu can do for a change, normally i'd hardly ever play the ninjas, but he's not bad now. Hitomi is taking a bit of getting used to as well. Ayane and Hayate i may leave cause i was never that good with them anyways.

Other games i'm working on at the moment, Super Robot Taisen L which arrived a week ago has been in my DS for a good while. Enjoying it a fair bit. Only about 8 levels into the game though, still got another 30+ to go.

Also been cleaning out the HDD on my new PS3(well, brothers old one) so that i can install catherine and get started with that finally.

I pray that you permit the sharing of my current woes pictorially: 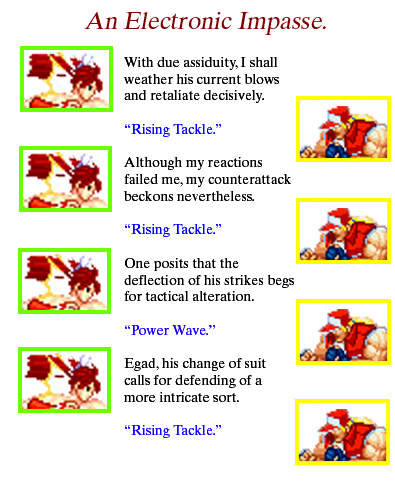 Just wait til you get to those SNK bosses!
M

MercenaryRaiden said:
I don't really have the time for this, but I finally got around to starting up my re-playthrough of Metal Gear Solid 3, although this time in the HD collection. I forgot just how good this was and it's probably my favourite of the entire series. Also my memory for remembering where every Kero-tan is surprises me.
Click to expand...

Someday, you will feed on a tree frog.
Click to expand...

Nah, I need to find reticulated pythons - They're great for a stamina recovery!

I actually finished up my replay of this tonight. Realllly forgot how good this is. It just seems to gel better and keep more of the momentum up then the other MGS games, with perhaps the exception of 1. It's just great fun from start to finish, although how I ever did as well as I did before on European Extreme confuses the heck out of me. I was terrible at spots in this...
R

I've been trying to get better with the 2nd Hokage purely because who wouldn't want to summon a giant water dragon on Naruto: Ultimate Ninja Storm Generations on the Xbox. Takes some getting used to though after I stuck with using Pain for ages.
F

I can't believe I bought the FIFA 12 euro 2012 upgrade DLC. Worst £15ish I ever spent. I'm just playing the same game with a new menu.

On the othe rhand I also bought the Asura's Wrath Nirvana DLC and that is awesome (and less than a third the price).

At the moment i've gone back to Fallout New Vegas on X360. Trying to max out the achievements on it.

AUKN Staff
My 3DS came back from Nintendo's Repair Centre today, so I've been playing Tales of the Abyss.

Loving it so far.