Vincentdante said:
Managed to snag a PS5 from GAME's website this morning so in celebration I went ham, emptied my savings and also got the LG 55CX I been saving up for.
Click to expand...

I’ve had an LG OLED 48CX for a few months now and it’s a great TV! Didn’t have the room for a 55” model unfortunately.

HWR said:
I’ve had an LG OLED 48CX for a few months now and it’s a great TV! Didn’t have the room for a 55” model unfortunately.
Click to expand...

It;s probably very obvious how excited I am for tomorrow so sorry for the spam lol
Last edited: 13 March 2021

AUKN Staff
Oh I spent several weeks researching before I chose the TV so I understand the excitement!

AUKN Staff
Looks like we’re due an Indiana Jones 4K boxset soon, it’s been rumoured for a while I believe but now Target over in the US have it listed and there’s a UPC attached to it.

HWR said:
Looks like we’re due an Indiana Jones 4K boxset soon, it’s been rumoured for a while I believe but now Target over in the US have it listed and there’s a UPC attached to it.
Click to expand...

Looks like they accidentally put 4 movie collection when we all know there's only 3... weird

Jon O Fun said:
Looks like they accidentally put 4 movie collection when we all know there's only 3... weird

Aliens must have done it


Honestly I don't mind Kingdom of the Crystal Skull, I think it's on par at least with Temple of Doom for corniness.

Vincentdante said:
Aliens must have done it


Honestly I don't mind Kingdom of the Crystal Skull, I think it's on par at least with Temple of Doom for corniness.
Click to expand...

I think if I went back and watched it now with my mind set to 'its just a slice of life spin off that means nothing' I'd probably enjoy it more.

It's the Fumoffu to Raiders Full Metal Panic!
(Keeping it anime centric)

Vincentdante said:
Aliens must have done it


Honestly I don't mind Kingdom of the Crystal Skull, I think it's on par at least with Temple of Doom for corniness.
Click to expand...

My thoughts are similar to be honest, I need a refresh on all four films but I don’t recall liking Temple of Doom any more or less than Crystal Skull, as they both have their drawbacks. Holy Grail is my personal fave so am looking forward to what I hope is a great new release.

I hope/assume that Super 8 gets a release here too. It has a reputation as being a bit of a Spielberg rip-off, which it is, but it's a darn good one and in retrospect feels like the missing link between Spielberg's own oeuvre and the nostalgia factory of Stranger Things.

The Ten Commandments is also coming from Paramount; it's good to see them releasing some catalog titles - even if it's catalog titles that I have little interest in. As has been said, they've supposedly got Indiana Jones coming in June which is an exciting prospect. Spielberg must be the most represented director on the format and all of the releases thus far have been truly excellent. I finally got the Close Encounters of the Third Kind UHD this week and it's just stunning - audio as well as video. That bass! I'm really hoping we get an upgrade of A.I. Artificial Intelligence for its 20th Anniversary this year - I think it's probably Spielberg's best film, or at least it's a very strong contender in a crowded field.

Re: Crystal Skull...I think the worst part about it is Shia LaBeouf; the film seemed to try and set him up to take over the main role, which he proved himself totally unsuited for. The main problems with the film lie in the script, which is mostly George Lucas' fault.

Interestingly, it seems that Zavvi will be stocking the UHD releases of American boutique labels - they have Santa Sangre up for pre-order. It looks like it'll be a stunning release, but I'm not sure it's a film I'm willing to drop that much cash on.
Last edited: 15 March 2021 Relive the unforgettable exploits of world-renowned, globetrotting hero Indiana Jones in spectacular 4K Ultra HD when the INDIANA JONES 4-MOVIE COLLECTION arrives in a new 4K Ultra HD set June 8, 2021 from Lucasfilm Ltd. and Paramount Home Entertainment. The cinematic classic that started it all—Raiders of the Lost Ark—celebrates its 40th anniversary this year, having first introduced audiences to the man with the hat on June 12, 1981. Forty years later, the legendary hero continues to captivate new generations of fans. Now, for the first time ever, all four films are available together in 4K Ultra HD with Dolby Vision® and HDR-10 for ultra-vivid picture quality and state-of-the-art Dolby Atmos® audio*. Each film has been meticulously remastered from 4K scans of the original negatives with extensive visual effects work done to ensure the most pristine and highest quality image. All picture work was approved by director Steven Spielberg.

In addition, all four films were remixed at Skywalker Sound under the supervision of legendary sound designer Ben Burtt to create the Dolby Atmos® soundtracks. All original sound elements were used to achieve the fully immersive Dolby Atmos® mixes while staying true to each film’s original creative intent.

The INDIANA JONES 4-MOVIE COLLECTION includes a collectible booklet with behind-the-scenes images from all four films. Each film is presented on 4K Ultra HD Blu-ray Disc with original theatrical trailers and access to digital copies. The set also includes a Blu-ray™ with seven hours of previously released bonus content as detailed below:

On Set with Raiders of the Lost Ark

§ From Jungle to Desert

§ From Adventure to Legend

§ The Making of Raiders of the Lost Ark (1981 documentary)

§ The Making of Raiders of the Lost Ark

§ The Making of Indiana Jones and the Temple of Doom

§ The Making of Indiana Jones and the Last Crusade

§ The Stunts of Indiana Jones

§ The Sound of Indiana Jones

§ The Music of Indiana Jones

§ The Light and Magic of Indiana Jones

§ Indiana Jones and the Creepy Crawlies (with optional pop-ups)

§ The Effects of Indy (Kingdom of the Crystal Skull) (HD)

§ Adventures in Post Production (Kingdom of the Crystal Skull) (HD)

AUKN Staff
Zack Snyder's Justice League is now available to pre-order on Amazon. Details are TBC other than some bonus features mentioned but I know the French release was listed as 2 4K discs & 2 BD discs.

As a fan of DC comics I want to see the Snyder cut at least once lol. 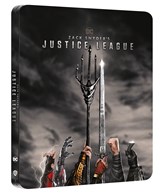 Do I order just because I know the resale will be crazy.....

Anyone know what's going on with Spaceballs 4k release? It doesn't seem to be coming to UK as far as I can tell?

Finally everything is setup. Currently watching Godzilla King of the monsters as my first movie and it looks amazing. Will get around to hiding the cables soon.

I just had a new TV delivered yesterday so I'm pleased to say I'm joining you all in the heady realm of 4K. I have my cables and a spanking new 4K player with multi region mod.

The question is though: as a HDR newb what settings do you more experienced people recommend for films and gaming? I will primarily be playing Blu rays on it and the occasional 4K disc (Got about 25 4K discs that came with Blu steelbooks since I collect em and they often have bundles of both formats lately). I most often game on PS4 Pro though i occasionally use the switch and regular Xbox One (which I realise are just standard HD) sometimes the PC which is connected to my TV sees some gaming but rarely.

I know it has stuff like filmmaker mode which uses AI and metadata and a game mode but what settings within different modes would you recommend? Any advice for me?

AUKN Staff
@Scrambled Valkyrie I recommend a YouTube channel called HDTV Test, they have a lot of videos based on the CX model including some on the recommended settings for gaming and film etc. The host of the videos, Vincent Teoh, is also fun to listen to.

Excellent. Had looked at a few vids but have seen a lot of contradictory info online, oh well. That's the internet for you I guess, at the end of the day it's all opinion. Thanks HWR: I will check that out now as I'm setting everything up.

AUKN Staff
No worries @Scrambled Valkyrie, the CX has a lot of settings to work with and I found Vincent’s videos to be very handy in figuring how to navigate them. There’s even a recent video discussing the latest firmware update which I still need to watch.

I'll need to check what I have on my HDR settings, but my SDR settings for Blu-Ray are isf Dark Room / Contrast 90 / Brightness 50 / Sharpness 0 / Colour 60 / Tint 0 / Dynamic Contrast Off / Super Resolution Off / Colour Gamut Auto / Gamma 2.2 / White Balance Warm1. With