Watch this show if you haven't.

Kanon 4-25 watched this over last few days and wow it was nothing short of pure brilliance. Well written amazing

Blue Exorcist: Kyoto Saga episodes 26-37 (Complete. Another solid arc, even if the story
does a Naruto with the supporting characters and has most of them be wary of Rin, only to realise their douchiness/differences/similarities and make up and work together and yadayadayada
Overall It's still enjoyable and fun, it has a nice atmosphere that makes me hopeful that it doesn't take them so long to adapt the next arcs.) 3.5/5

The electrical issue is still on-going but it seems to be okay during the early day so I made use of the time for more Space Dandy. Episode 10 is probably my favourite out of Season 2 so far.

I need to pop in the disc from the UK Steelbook to compare, so I can get my email off to AL...

Hokuto No Ken (rewatch) Episodes 1-8 Just got the Discotek SD Blu ray set. Yeah it's an acquired taste and I can understand a lot of modern viewers turning their nose up at it but the movie is what got me into anime in the first place. It's so great to finally have the whole series in decent quality and with (so far) pretty good subs. The previous Discotek DVD set apparently had some terrible subbing errors in later episodes, I skipped that release since I had some perfectly good fansubs at the time and the complete DVD set wasn't too far off £100 to import from the US. Considering the huge number of episodes and the fact that most of the sub errors on the DVDs were in the 4th arc onwards it'll take me some time to get there!

So.. Whats your opinion on this so far

Shadow Cat said:
So.. Whats your opinion on this so far
Click to expand...

It's a bad show, but it's so entertaining I kept watching. There's some rather silly but hilarious over-the-top death scenes in this show and there's not enough imo.

Best moments include (spoilers ofc):
Now here's the thing, would I buy the Collector's Edition Anime Limited Blu-ray set? Absolutely. I love the concept of this show, and while it's pretty terrible it's a 'so bad it's good' type show. 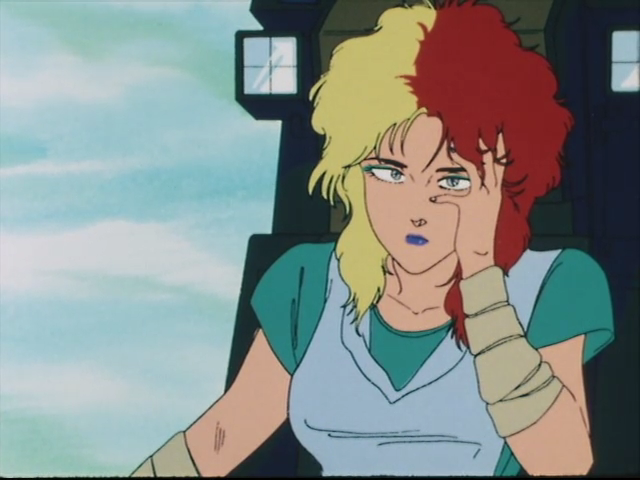 Do let us know what you think, I didn't think they were that bad but they're generally regarded as the worst episodes of a series that's not particularly well liked in the first place.

Hey, I do still have some of my old ZZ screencaps and reaction images. Too bad I can't play the ZZ BDs on my PC to take nice new HD screencaps because they seem to be the type of disc that crashes AnyDVD after a couple of minutes of playback taking whatever media player I'm using with it. Kinda regret deleting my fansubs now. Random Bonus Image
Last edited: 17 November 2017

Shadow Cat said:
So.. Whats your opinion on this so far
Click to expand...

NormanicGrav said:
It's a bad show, but it's so entertaining I kept watching. There's some rather silly but hilarious over-the-top death scenes in this show and there's not enough imo.
Click to expand...

From what I've heard they are adapting the material that the Mangas Ousama Game and Ousama Game Extreme also cover. I have read both, since they are released in German. The first installment was taking itself pretty serious in the beginning until it ended up in absurdity, the sequel starts off right off the bat with absurdity and could actually still top that towards the finale. (Except for the last bullet point of NormanicGravs spoilers they are all from the first installment. So expect even more such over the top moments.) But even so, the ending of the second installment actually had me slightly surprised.
The Anime seems to start off with the second installment and interwine the first within its sequel somehow. That probably kills off the issues I had with reading the first installment, because I can't really imaging anybody taking the second installment serious at any moment.
I am also considering watching it, depite it's horrible directing (as far as the trailer goes) just for the voice casting of a certain bitch (this designation fits that character to a T). But couldn't really bring myself to it, yet.

Hellsing Ultimate Vol VII
Probably my favourite one so far. There's some backstory for a couple of characters and some actual pathos rather than constant ultra-violence (it still had plenty of that though). Still no Alucard, but seems he'll be back to "killin' nah-zis" next volume

That was dandy baby.

Kowai's character. I can't even.

AUKN Staff
C3 episodes 9-12 (Complete. A decent series which has some very cool concepts in the form of the Cubes. It feels like a better realised Elfen Lied type anime in places with deadly but cute girls violently maiming others. Overall a solid watch) 3.5/5

Charlotte episodes 1-13 (Complete. This is a series that almost feels like two different series' when looking at the first five episodes and the latter half. The progression is well set up, and the series is quite enjoyable, the MC develops nicely as well, especially during episode 7. Also, from the emotional pangs you can tell this was conceived by the same guy who penned Angel beats! Though I did like that series more. Much like the aforementioned, this also has a fittingly bittersweet ending.

The story does have issues
episode 11 especially, the villains come out of left field and the shock factor is ramped up excessively. It tears holes into the story
and plot cliches
i.e using the amnesia trope with the ending for instance
It's also a Shame AL had to split this over two releases, ah well. Overall this was still a good anime. Flawed and rushed, but good.) 3.5/5
Last edited: 18 November 2017

Yep. All great moments. Esp the 2nd from last had me almost dying