That was a slightly odd note to end on (Hyakki seems to show little remorse for his crimes, despite the narrative having forgiven him; Eri's death was so heavily signposted it was almost painful), but I'm glad I stuck with this series, and I hope the little coda at the end isn't a sign that they've ruled out a second season.
Last edited by a moderator: 7 August 2016
T

Windy Tales (Fuujin Monogatari) - Episodes 1 - 3 (out of 13) (First Impressions)
Windy Tales (Fuujin Monogatari) is a beautiful and sweet slice of life series, one that has effortlessly swept me away and captivated me with its one-two combo of its mystifying visuals and its relaxing soundtrack and even though the series is over a decade old it still feels like a breath of fresh air today among many other series of a similar nature. The premise is simple, a couple of 8th graders are a part of a digital camera club and spend their days taking photographs of things that they encounter on a day to day basis however in one way or another each seems to revolve around the wind. It’s hard to fully grasp the nature of wind in this series but it does seem as if some mysticism exists around this element. 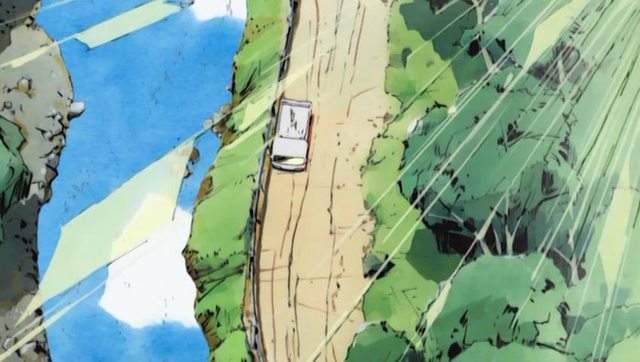 The art style for this series is a stand out for sure and although I say this a lot and by doing so the weight of this statement may seem lessened, this is without a doubt one of the best looking series that I've ever laid my eyes upon and I don't say that lightly. Everything is painterly and sketchy without looking harsh and fantastic compositions are utilized in order to frame each and every scene in a way that balances out all of the elements. Fisheye lenses are used as well as sweeping panoramas in order to show off the environment while visible lines in the sky are used in order to visually show the wind blowing. Every frame is just attractive to look at from an art style and cinematography standpoint. Lots of 3D elements and CG are utilized however yet again it’s all balanced and used tastefully. A lot of the way in which the foreground and backgrounds move independently reminds me of a parallax effect in a sidescroller of sorts which does wonders in giving each scene a sense of depth. It’s a show that looks great in stills but looks even better in motion as everything from the characters hair to the trees and foliage blow gracefully in the breeze. 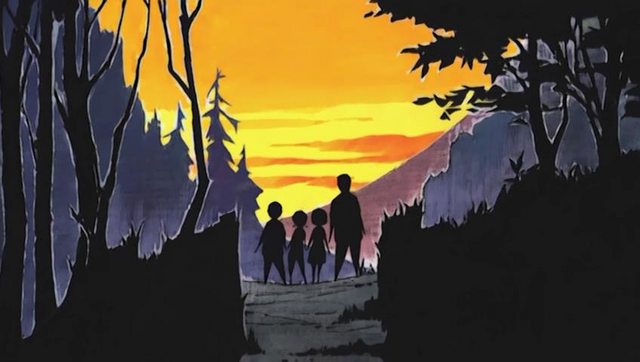 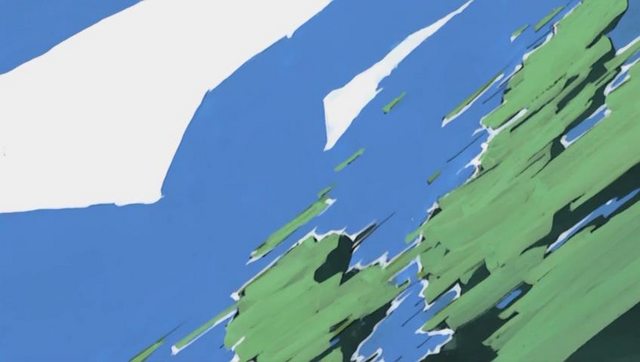 It’s hard to explain but although the show is funny and charming, underneath the initial layer is a deeper series with complex and interesting characters. I doubt that this is the type of series to delve in too deep and conclude everything by the end, but that makes it all the better. It’s a series that delves into the fondness of the heart and the inevitability of getting older but of course to cling onto the past is to open up old wounds. Let the complex things stay as they are. 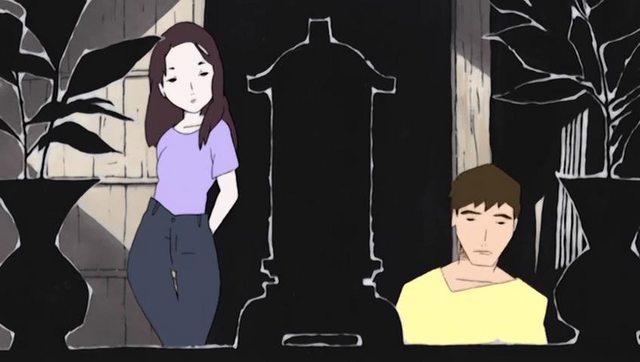 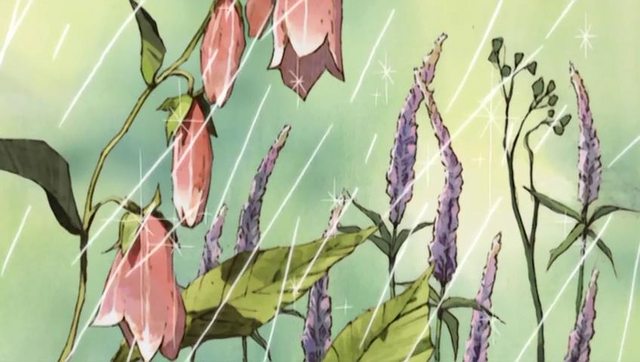 The character designs are attractive and pretty and what could be described as deformed and not lifelike, but funnily enough this breathes more life to them and makes them feel more realistic and individual. The smiles are infectious and the pale skin with the large dark eyes is a lovely juxtaposition. The music is composed by Kenji Kawai and he does a terrific job here. The soundtrack stood out instantly. The best way to describe it is dreamlike, not unlike the visuals you feel a sense of weightlessness while listening to it. It’s happy and cheerful and yet enigmatic which goes well with this show and its dreamlike nature. The music sweeps you away like the wind but a weight emanates from it. Windy Tales so far is a show that makes me feel nostalgic and with that comes a bittersweet happiness. I feel happy and sad at the same time, and although not much is happening plot wise I feel an air of melancholy surrounding me. The sounds of cicadas as the sun’s rays stretch across the horizon reminds me of days gone by, days where I would take pleasure in such sensations. Like they say, absence makes the heart grow fonder. Not much really happens in Wind Tales, but that’s fine. I wonder where the wind will take me. Episode 2: So THAT'S where leek spin comes from!

Episode 3: Wait did Rukia bring Orihime back from the dead? That seems incredibly overpowered. I know that Rukia says that she could heal her because her chain was still attached to her body but I'm not entirely sure how that works...

Episode 4: Chad. What a name. With other characters having names like Ichigo, Rukia, Orihime and Yuzu, the fact there is a character named Chad is just oddly hilarious. I would put millions on that being a dub only thing, like he has a super hard to pronounce Japanese name so they just localised it to Chad. Reminds me of Monk from Ghost Hunt.

Episode 6: Rukia's drawings get me every time.

Episode 7: This episode felt a little disjointed. Like only the first half was spent finishing the last episode then the rest of the episode just kind of meandered around a little before setting up the next episode at the end. Not really bad just a little weird.

Episodes 8 and 9: I really liked these two episodes. I'm genuinely quite surprised how character driven this show has gotten. The closest I've seen to this show is probably DBZ and that show is mostly just people punching each other for hundreds of episodes. Not even 10 episodes in and we've already hit some key character development and backstory for Ichigo and his family.

Ushio and Tora - Episode 26 (Series 1 Complete)
An excellent finale to round off easily the most consistent and for me personally one of the best series of the year. I hope it manages to keep the quality level of the last 6 or so episodes up for it's final 13 episodes in April, because for me personally this could easily be one of the greatest shonen series of all time. Unusually for a recent shonen series, it manages to pace itself perfectly, it's never too fast, nor too slow, and does an excellent job of balancing more comedic and character developing moments with more serious narrative moments. It also manages to balance Ushio's ability well; Often shonen characters veer from the "super-amazing able to anything and everything with minimal effort" variety to the "completely worse than useless, why has his mother not intervened yet?" protagonist. Whereas Ushio and Tora manages to perfectly balance Ushio's abilities as 'the chosen one' with his inexperience as a fighter, and as result whilst he is powerful, he is also able to show development and it never feels like a stretch for him to suddenly lose a fight epicly. It also manages to balance it's characters well, managing to focus on the titular duo, without ignoring any of the supporting cast and without just reducing them to a caricature (like Hunter x Hunter does with Leorio much to my extreme personal annoyance, as he is clearly the best character). The only things about the show I would potentially question are how long it takes to get it's act together, and the decidedly grungy aesthetic and animation style. Whilst I applaud MAPPA and VOLN's commitment to the look of the show, I can't help but wonder if the fact the show looks weirdly grimy is putting a lot of people off. It won't ever get the respect and reputation 2011's Hunter x Hunter has, but for me personally it's more entertaining, more engaging and significantly less drawn out and annoying, and it'd be a shame it were to be overlooked and undervalued in comparison.

Heh. Good luck with that.

That was a slightly odd note to end on (Hyakki seems to show little remorse for his crimes
Click to expand...

I kind of liked that - I'm giving them credit for saying "look. doesn't matter how much sympathy you have for someone, maybe they're just BATSHIT CRAZY NOW". But I agree the tone wasn't completely harmonious on this front.

Glad you both picked this up and kept going with it, really rewarding show.
Last edited by a moderator: 7 August 2016

Whilst I don't think most of us were in the mood to watch any anime yesterday, I think we might need this thread today.

Episode 11: I know that I'd surely buy a Yoshinoya photo book

It's really reassuring to know that even though I'm almost at the end of the show, it has another 4 or 5 seasons after it. I think I'm going to start alternating a season of this with a season of Bleach.

Really enjoyed the fight in this episode. Can't wait to see you-know-who (We really need spoiler tags back!) in the next episode.

Re:Zero - episodes 4 & 5 - You know, this show could really do with a lot more Puck. I thought I was going to like the twins but now I'm not so sure, they just seemed so amusing at first but it wore off real quick. Still, it's a decent enough show and I'm enjoying it well enough.

Nisemonogatari 3-11 (RE WATCH 4 COMPLETE)
Kabukimonogatari 1-4 ( RE WATCH 4 complete)
God I still dislike the toothbrush scene its okay but its a push to say I like it.