Apparently the Spear is one of the items you can pick up and use in battle in the game.

Battle Orchestra is something I've looked up bits and pieces about before. It's a beat-'em-up a bit like Nintendo's Super Smash Bros. series, and you can play as a bunch of Eva units or Angels — including Lilith! There's even a cameo appearance by the Gunbuster.

This pair of short YouTube videos shows the special attacks of each character, and those of Leliel (the Angel on the left in that Twitter image) and Lilith in particular are completely mental. One of Leliel's moves in the first video sees it open a pocket dimension and bombard its opponent with the regurgitated contents of it, including skyscrapers and a battleship! And, raising the stakes even beyond that, Lilith's "death blow" manoeuvre in the second has her initiate Third Impact just to deplete the other player's energy bar by half. Overkill?

Those videos also show a trio of unfamiliar Eva units. The silvery white one is Unit-04, which was unseen in the original TV series. (That was the experimental unit that blew up at one of NERV's US bases.) The other two are Evas Type Beta and Unit Alpha. The first of these two made its debut in the game Detective Evangelion, which @Professor Irony took a look at in the Eva simulwatch thread:

Vol 3 Some very interesting developments in this vol 3. As the series reaches the halfway point the character drama has reached breaking point with confessions of love (or like as the language used) and also some confrontations of motivation! Probably the. Most interesting thing the series does...

In Battle Orchestra, Unit-04 is piloted by Kensuke; I never pictured him as a brawler. Type Beta has Kaworu as its pilot, as per Detective Evangelion. Unit Alpha, making its debut in Battle Orchestra, is apparently driven by a Dummy Plug, specifically the Rei Ayanami type. (For clarity, that was the Dummy Plug that was responsible for destroying Bardiel/Eva Unit-03 while controlling Unit-01, as opposed to the Kaworu model that was plugged into the Mass Production Evas in The End of Evangelion.)

As a last bit of trivia about Alpha and Beta, their Japanese names are Kougouki and Otsugata (Unit Kou and Type Otsu). We came across the terms kou and otsu during the Eva simulwatch.

Neil.T said:
Rewatching Evangelion continues to turn up new stuff. Noticing the terms kou and otsu on the monitor showing both halves of the 7th Angel, a quick Web search brought me to this interesting page:
https://sci.lang.japan.narkive.com/dFvajLYs/kou-otsu-hei-means-abc-123
Click to expand...

Meanwhile, the alpha designation would resurface in some form in Evangelion 3.0, where Kaworu and Shinji have the symbols Α and α respectively on the backs of their plugsuits.
Last edited: 16 May 2020 The dialogue basically just mimics lines from Eva to create a serious tone ahead of the punchline. In case anyone's interested, it reads:

Misato: Oh no!
Shinji! Dodge it!


The sound effects are either just Geometric Lad looming overhead or are perhaps imitating the sound he makes in 1.0. I'd like to believe it's the latter.

Moderator
I feel like someone should have been questioning whether Ramiel was human after all.

Moderator
That is perfect in every way.

So they've made a life size EVA statue and you can sit in the entry plug! 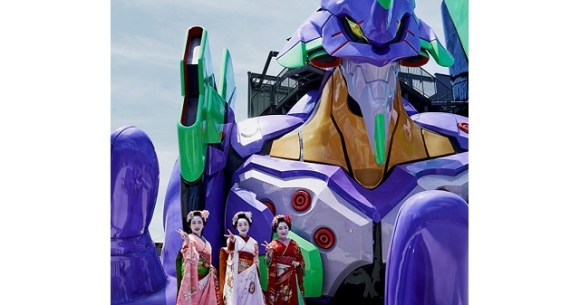 WMD said:
So they've made a life size EVA statue and you can sit in the entry plug!
Click to expand...

Wow, that's amazing. Look at the size of it!

I love the design concept; it looks so menacing. (Wouldn't mind a wee seat in the entry plug of that as well.

Now for the unavoidable geeky bit?

This is something I found on Evageeks.org a while back. It's a size comparison image made by one of the site staff, showing the approximate relative sizes of the Evas and Angels along with some notes: I say approximate, though, because one of the other forum users points out on the above page:
"Originally, the Gainax staff never settled on an exact height and weight for the Evas. They 'modified' them according to the situation, in some cases making them much bigger (taller than the buildings), in some cases smaller. The reason for this is that they didn't want to be tied down, and so this variation allowed for more dramatic scenes. (Asuka in EVA-02 climbing up a building, for instance.)"

He goes on to give official figures later supplied by Gainax to the makers of the Super Robot Wars games. The Evas heights in the original series apparently fluctuate between 40 and 200 metres(!) and their weight between 700 and 96,000 tons!

In Rebuild, by contrast, Gainax did set a fixed height for the Evas: it's 80 metres from the floor to the top of their shoulder pylons.

Neil.T said:
The Evas heights in the original series apparently fluctuate between 40 and 200 metres(!) and their weight between 700 and 96,000 tons!
Click to expand...

That's a crazy level of variation. Theres so much going on in that show that I cant say I ever really picked up on it. And they were right to care more about the quality of the show over some metric that doesnt really matter. The Eva's are big.

WMD said:
Theres so much going on in that show that I cant say I ever really picked up on it.
Click to expand...

I didn't either, to be perfectly honest. And it happens in Rebuild as well, actually, despite the fixed height. 3.0 in particular has some apparent size inconsistencies — and design inconsistencies between scenes generally — and these are again caused through dramatic effect.

And that's the bottom line. For all the hoo-ha and intellectual posturing within Eva fandom, I think, for me, if you understand that one fact, then you understand Eva. I reckon Hideaki Anno himself would be quite happy for anyone to enjoy his creation purely as an action show with big robots. The snobbery comes from the fans.

(Well, some of them. They know who they are.

Ack! Who cares about how tall and how heavy the damn things are? Just watch the show and enjoy it-don't try to rationalize every little thing.

Totally agree with that.

For clarity, the reason for Gainax supplying those stats was so that the makers of Super Robot Wars could have a go at correctly proportioning all the robots in the game relative to each other. "How tall is an Eva supposed to be compared to a Gundam?" for example.

Just for the record I'm not into giant mecha shows. Really, about the only ones I've ever watched that I genuinely like are Gunbuster and Diebuster which are both early Gainax. And don't even get me started on anything Gundam which I truly detest.

zrdb said:
Just for the record I'm not into giant mecha shows.
Click to expand...

Funnily enough, when I was weighing up whether to go and see one of the Evangelion Rebuild movies at my local cinema back in 2011, I remember thinking to myself "Hmm, giant robots... Is that really gonna be my thing?"

It seems silly now because some of my favourite anime include Gurren Lagann, Code Geass, SSSS.Gridman and DARLING in the FRANXX. The only Gundam I've seen so far is the first Thunderbolt film, December Sky. I enjoyed Gunbuster when I saw it for the first time last year, and I'd love to see Diebuster sometime, but then I'm a FLCL fan, so of course I'd want to see Diebuster.

Most people who watch Diebuster say it doesn't even compare to Gunbuster. Of course it doesn't, Diebuster is it's own show-I enjoyed Diebuster just as much as Gunbuster. GB is a super space soap opera while DB is more of a straight science fiction story. Neil.T said:
Funnily enough, when I was weighing up whether to go and see one of the Evangelion Rebuild movies at my local cinema back in 2011, I remember thinking to myself "Hmm, giant robots... Is that really gonna be my thing?"

It seems silly now because some of my favourite anime include Gurren Lagann, Code Geass, SSSS.Gridman and DARLING in the FRANXX. The only Gundam I've seen so far is the first Thunderbolt film, December Sky. I enjoyed Gunbuster when I saw it for the first time last year, and I'd love to see Diebuster sometime, but then I'm a FLCL fan, so of course I'd want to see Diebuster.
Click to expand...

I'm definitely not a gundam guy (not that I hate it, just never tried really getting into it, and it does seem a bit too political for my taste) but Unicorn is reaaaaally good. The animation is incredible and the fighting choreography is very exciting. The whole newtype thing is just enough supernatural to sweeten the whole thing even more. Add to that Sawano on OST duty and delicious retro character designs and you have a very strong overall package.

There we go, random recommendation. But, dude! No! You'll set off my Eva-memeing again.