I'm ordering these Collector's Editions from AOL with their summer code, to save myself about $40:

AUKN Staff
Almost forgot about MVM having a summer sale but pre-ordered Attack on Titan Season Three Part One LE.

Ive ordered so much this week.

AUKN Staff
Picked up Blank Canvas: My So-Called Artist's Journey volume 1. Only cost me £3 because I had £7 worth of reward points saved up for the comic shop in town.

Ocean Waves Was worried this no longer came with a slip (Still not sure)so ive been searching on eBay for a while and one finally popped up!


Made in Abyss
Collector's Edition Blu-ray

Princess Principal
Collector's Edition Blu-ray​
About to give Jay a heart-attack for this one. I decided to make use of the MVM Summer sale and I wanted to pick up some titles from it. Since MVM have been replicating most of the US Sentai sets I ordered three titles from them. While I wish MVM would stop using the Australian artwork as a base for their standard Amaray Blu-ray covers, but the rest is solid enough for the price-point. Let's go over them shall we?

Armed Girl's Machiavellism - We lose out on stickers but honestly I have no real use for them. They kept the artbook and artcards at the very least.
Made in Abyss - I almost didn't order this from the sale because I already watched it, but since I remembered MVM saying that it was selling out I decided to add it in as a second order. I was not a fan of Sentai's set and this version is simpler enough for me to consider it.
Princess Principal - A show that many said is pretty good, and while Sentai put out a rather lovely set it's overpriced and quite large due to the filler box containing the coasters and poster. MVM's version omits the filler box, but the artbooks themselves are also squashed in return, presumably due to cut down costs on the paper used in order to keep the SRP low. Never-the-less, nothing in the artbooks is removed from what I have heard.

In terms of other MVM special editions, there aren't any that have my interest at the moment outside of these three. Fruits Basket 2001 I'm going to go for the Funimation release for the on-disc extras that are missing in the UK release, and Sword Oratoria I'm opting for Sentai. Eccentric Family is up in the air, but it's currently not a priority at this point. I may get Girls' Last Tour but I don't think I'll like the series to be honest.

With the MVM code: Found this in CeX. May order the S1 set from CeX at some point later

Overlord 3 CE from deep discount. I'm still not happy I'm having to import this Manga.... 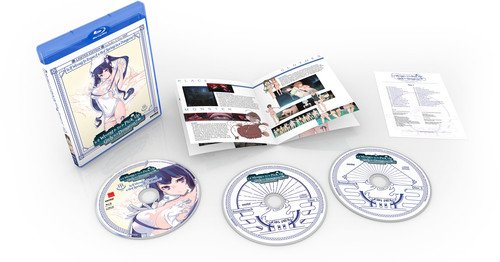 Is It Wrong To Expect A Hot Spring In A Dungeon?
Limited Edition Blu-ray

To answer the question, no it's not wrong. What is wrong however is that I left it this late to grab this OVA episode. Considering that I plan to get the series via Sentai in their CE form (and it's quite clear that the movie will no doubt get similar treatment), I may as well put the extra funds towards getting this version before it's too late. There are a couple of units left on Amazon (link is affiliated but it helps support me) but other than that this version is out of print.

There is a standard edition version for way less if you just want that, but I had a listen to the OST and quite like it. A lot of Sentai's sets that came with OSTs are so-so but I remember DanMachi putting some extra effort into their score.​

Managed to win auctions for My Hero Academia Season One and Season Three - Part 1. Lost the two other parts though... From the 30% off secondspin sale Preordered Rascal does not dream of bunny girl senpai from UP1USA

Vatican Miracle Examiner....MVM DOTW....glad I didn’t get it when it was first released