I have pretty much anything I'd want from today, I guess I'll have a think about TiR UE but that's it, if I don't get that then nothing for me today.

AUKN Staff
While I have been interested in the Ultimate Edition sets for Eureka Seven and Wolf's Rain, I have decided to turn down both Xmas sale offerings.

I already own the Funimation limited edition release for Eureka Seven and while £39.99 is a great offering, I would rather wait for the price to be at least £25-30 range before considering it. The same can be said for Wolf's Rain.

As for Giovanni's Island, I'm sure it's a nice set but again no title on the spine and it's got the classic large-sized digipacks which I just don't want to deal with again. Miss Hokusai may have a nice packaging design and booklet, but the disc stuff I've already mentioned before so I'll pass. At this point I've had or have from previous years offerings most of what I'd want. Tis tragic. I imagine a lot of others are in the same overfilled ship. Ping Pong, Terror, etcetc. One thing I did order is Red-headed Snow White for the box.... despite owning the singles. I didn't see the bold/small print: is that not going ship before next year, then?.... that's one way to avoid delays: announce them before sending. I like it. Reverse psychology.

Going on Escaflowne, the UEs are too big. Purchased for £80ish, sold for £80ish. The OST makes me kinda want it for half that... but yeano. Those days are gone where I'd hoard. Hokusai's wood is nice an' hard, mind. The film isn't terribly high budget or memorable yet unusual enough to be worth a watch. Shame no way to own Bebop CE without paying £199.99.

Anyway, I'ma wait for mystery boxes. Surprise CeXing is just about the only way to get me to try anime, nowadays. I tried the Circus series with a shota and butler and was pleasantly surprised, in a very straight non-pedo way. You just never know. This year I'm hoping for Kiznaiver... I think? On-hold at 6/10, destined to never be finished, but nice looking/sounding. That's a plus.
K That was faster than expected

AUKN Staff
Not sure if it’s been said or not but Aldnoah Zero Season 2 CE has sold out.
R

Yeah, I would be very happy if my orders shipped that quickly but I'm certainly not expecting it

SAO Movie arrived yesterday (4th) after ordering on the evening of the 2nd.
K

KingJimmeh said:
SAO Movie arrived yesterday (4th) after ordering on the evening of the 2nd.
Click to expand...

I was going to say I haven't heard anything about Day 1, but I just checked and the Funimation stuff isn't shipping till January. I strongly considered getting the Escaflowne Ultimate edition but eventually decided not to, and instead hope the collector's edition goes on sale at some point. Well, ended up asking to cancel Wolf's Rain. It's not that it's expensive or not worth the money, but considering I'm still holding out for March Comes etc and maybe Silver Spoon, I decided to hold out on it for the moment.

Silver Spoon is too new as its post April. So may got back down to EB price (£35 each no lower)

AUKN Staff
I’m curious to see if Amanchu! Will pop up or end up in one of the mystery boxes. 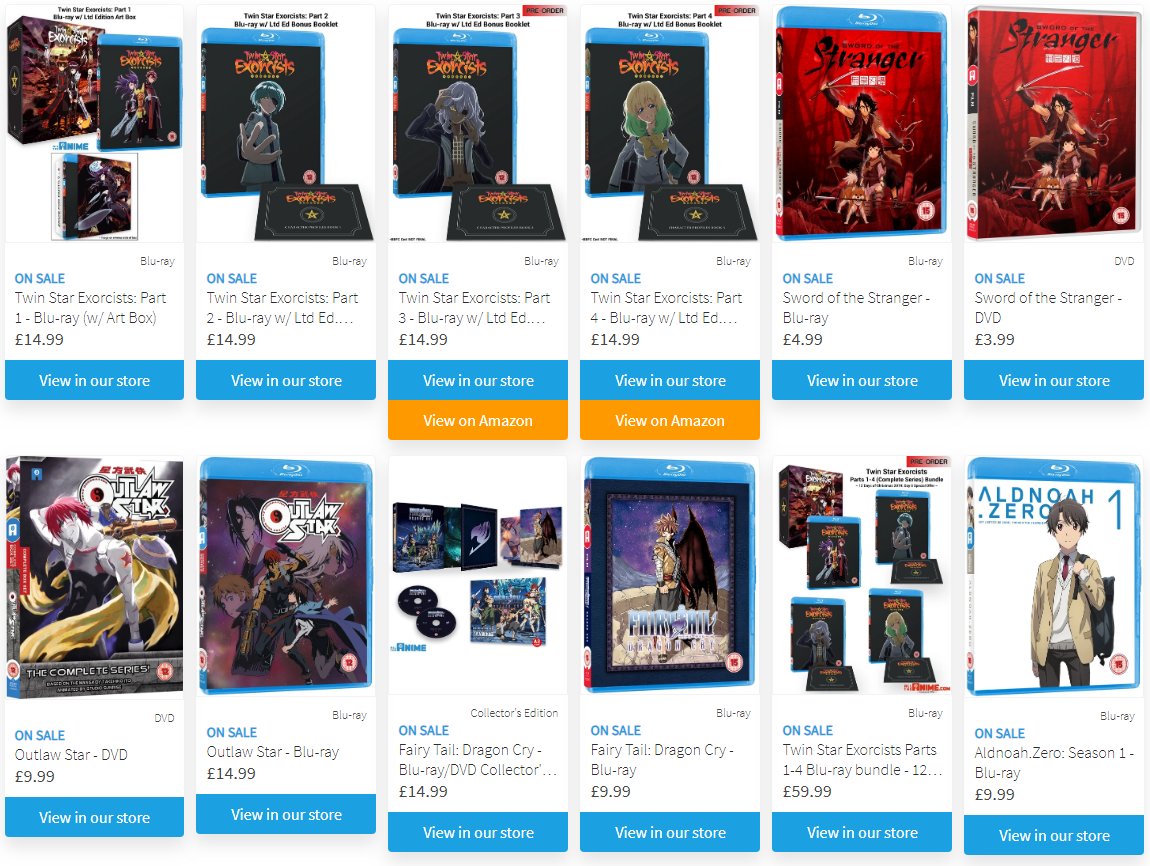 Well TSE didn’t do well all parts £15 even the ones that aren’t out. Wait the bundle saves nothing that’s weird. Actually no the bundle is 3p more expensive

Nothing for me today