D1tchd1gger said:
a bit of history research (like what I did with The Wind Rises, if you remember)
Click to expand...

I do, and it was a very interesting post. I actually have it bookmarked, being such a fan of the film.

I'm unfortunately unlikely to have the spare time to watch any of the films bar Barefoot Gen and its sequel, but I know the others well enough to be able to take part in any discussion. The exception is In This Corner of the World, which I've seen only once and wasn't a fan of.

I'd like to get the chance to watch Momotaro again, but... we'll see.

I love the idea of this simulwatch, though. Great stuff.

D1tchd1gger said:
as this is fairly short
Click to expand...

I was going off the length I saw on MAL, problem was, I was looking at the wrong one! This is an earlier Momotaro propaganda anime: 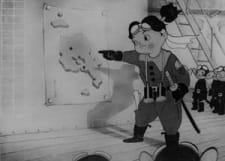 Momotaro sends a sneak aircraft attack to sink the ships of Demon Island, using his animal companions as crew members and pilots.

myanimelist.net
Another one that can be found on YouTube. It's 36 minutes compared to the film at 74 minutes.

I've not managed to commit 100% but I've really enjoyed the discussion of the ongoing but nearly finished Pacific War simulwatch. Unsure if they've been done before, but how about a Ghibli (or Miyazaki) simulwatch? The Wind Rises provoked a lot of discussion. I'm also planning on watching Patlabor / the works of Mamoru Oshii and the original Mobile Suit Gundam in the coming months if anyone else would be interested in those.

I have suggested that as well. Would be a long-term one as I found a movie every 3 days a struggle, although maybe that was the subject matter or the extra research I did on each.
I reckon one a week, but not just yet.

Moderator
Patlabor was mentioned as a possibility before, I think, although there is a lot of it, so I’m not sure what the best way to tackle it might be. I’d be up for that anyway, I have a lot of time for it.

Yeah in general a series is a lot easier to keep up with as it's only 20mins a day.

With regards to Ghibli, personally I'm less interested. I'd only watch a small handful of them rather than be involved for the whole thing.

Perhaps it's a moot point as I've just gone on holiday so wont really be able to watch anything for a couple of weeks now in any case.

Professor Irony said:
Patlabor was mentioned as a possibility before, I think, although there is a lot of it, so I’m not sure what the best way to tackle it might be. I’d be up for that anyway, I have a lot of time for it.
Click to expand...

I'd suggest the Early Days OVA + the 3 films, which would be very manageable.

Moderator
As it’s due to start streaming on HIDIVE at the end of this month, would anyone be interested in watching Moribito?

I've seen Moribito once, and I just didn't gel with it at all.

As ever, I'd read the thread for it, though.

Moderator
Fair. I’m open to suggestions on other things as well, it seems a while since we did a simulwatch.

I’d still be keen for Patlabor or You’re Under Arrest personally, but I know accessibility,at be an issue for those.

Professor Irony said:
As it’s due to start streaming on HIDIVE at the end of this month, would anyone be interested in watching Moribito?
Click to expand...

As we discussed somewhat in the discord, I'm game to watch Moribito in a simulwatch. It's an interesting historical fantasy(which deserved all the books to be releaed here not just 2) but i found it great. So I'd be game for it

Moderator
Think I'll probably start on the Patlabor tv series tonight. If anyone's interested in joining, I'll put a thread up, but if not, I'll be posting in the viewing journal anyway.

Professor Irony said:
Think I'll probably start on the Patlabor tv series tonight. If anyone's interested in joining, I'll put a thread up, but if not, I'll be posting in the viewing journal anyway.
Click to expand...

My plan for Patlabor is to rewatch it all when I eventually get back around alphabetically (I’m currently still on the M section of my backlog) but I’m interested to hear your thoughts on the franchise.

I havent got the series but I'll keep up with anything you say about it. I've seen the OVAs and enjoyed them (thought the first set of OVAs was better) Professor Irony said:
I’d still be keen for Patlabor or You’re Under Arrest personally, but I know accessibility,at be an issue for those.
Click to expand...

I know I haven't been around much and sadly didn't have the time for simulwatches recently, but would still really like to do YUA with you guys some time, the OVAs are only four half-hour episodes and personally I feel like the English language release has been OOP for so long no-one should feel guilty about watching them whatever way they can and besides, perhaps it would re-ignite a bit of interest in the series, it's not one I really hear anyone talk about any more.

Nice to see you starting Patlabor anyway Prof, kinda wish I could follow along with that as well now, but sadly I'm several hundred miles away from my Blu-rays (and my old DVDs which I'm meant to be sending to @Vashdaman at some point - You will get them eventually, man, I promise).

Double posting because I've discovered that if you take a little trip to the USA using HiDive, both Patlabor on TV and You're Under Arrest are available. The YUA OVAs are counted as the first four episodes of the TV series.

Moderator
Oh, interesting - I was aware HiDive had YUA, but didn't realise that included the OVAs.

So it's been ages since we had a simulwatch so figured I'd start it up again and see what people might be keen to watch together. For me the shows I'd be keen for are:

Threw in a couple of comedies as we never really watch those together and figured I'd see what people thought.

Anyway let me know what you think and make any suggestions if you have them.

Gah, unfortunately I don't actually own any of those, so I'm out. As ever, I'd read the thread for any of those, though.
Click to expand...

If there's something youd like to watch then put it forward. My list isnt meant to be absolute. And we can have two at once or make a list and order a few shows one after another.

Also I didn't put any films up but I really enjoyed breaking up a show with films last time so would probably want to do the same again if others are up for it.

I know it can be hard to get but I do think everyone should give From the New World a go. It's so different and interesting. Also I dont think Pani poni Dash had a uk release. I have the R1 DVDs. But it's a wonderful absurdist character comedy!