Girls wIth Guns said:
Thankfully anime movies shown in theaters in my area never seem to attract more than 20-25 people in the seats, so there is always plenty of room to spread out and sit away from everyone else. Still, I'm glad I have my own projection theater room in my basement, so I don't feel much need to go out to a public theater at all, other than to attend some of these special anime showings.
Click to expand...


HellCat said:
Normally if I see anime at the cinema in last few years it's been a press screening in London, which is usually without issue since it's journalists in a smaller theatre. No local cinemas show anime releases so it's rare I'll pay out to travel. Broly was an exception so made a booking at the O2 Arena.
Click to expand...

For the most part barring Studio Ghibli screenings (Spirited Away at The Regal in Redruth tomorrow, 50-ish people, almost sold out) requested through ourscreen in the Merlin Cinemas, the main cinema chains in Cornwall - Merlin and WTW (no Cineworld, Odeon or Vue) are very much (and understandably) cinemas that mostly show mainstream films and events. So it's a certainty for me to be paying for a (discounted via season ticket) return on the train to Plymouth (nearest Vue) for a screening (sometimes with a friend, not all bad).

It would be nice to have screenings a little bit closer to home (Even if it's Truro or Redruth, travel for "free" on the season ticket, ha) as I have another friend who utterly struggles to come to the screenings at Plymouth as we would get back based on the last train home (arriving in Truro just before midnight), no bus service after 11:30 and work the following morning.

It's just wording it without sounding like a crazy Cornish-centric person rowing a tiny boat in Charlestown harbour with the harbour master telling me off whilst singing Emil's Song from Nier:Automata.**


thedoctor2016 said:
So as the US is getting Penguin Highway in April will we I wonder...
Click to expand...

* Recollecting. That figure is more than likely not accurate, to be honest.
** A couple of hours later spent redrafting it later and hitting Post reply...

Came back from another showing, this time dubbed, was completely packed with not a single empty seat, movie was still good. I think this Dragon Ball thing might take off.

qaiz said:
Came back from another showing, this time dubbed, was completely packed with not a single empty seat, movie was still good. I think this Dragon Ball thing might take off.
Click to expand...

They said it was already 5th Highest anime gross

Saw Broly at the cinema with the gf today. It was a really good movie, and I'm so glad they added more screening days as I was at work the other days it was on. It actually wasn't packed at all, less than 20 people in total. But it was nice being able to get good seats

When do we get the Big Green dub?

Don't Manga want to have a clear conscience?

Thought I'd try dragging the ongoing cinema discussion in the AL thread kicking and screaming into here.

This seems like as good a place as any to resume from:

thedoctor2016 said:
The double standards if something was in Wales people would be livid.
Click to expand...

thedoctor2016 said:
People would have loved to see HF in the cinema for example.
Click to expand...

I think part of the problem here is treating people as one big liquid mass. There doubtless are people who would be miffed if the UK premiere of a new anime was in Scotland, but not "people" generally. There would just as surely have been some anime fans in your area interested in going to see the first Heaven's Feel movie at their nearest cinema, but again: not "people" generally.

In the case of Heaven's Feel, would there have been enough people in the area who would have gone to see it? Because at the end of the day, a distributor (AL in this case) can only offer content to cinemas; they can't forcibly make them screen anything, so it makes this point...

thedoctor2016 said:
I just wish they tried a bit harder to get some of them to more people.
Click to expand...

... moot as well, surely? Pretty sure that issue's been explained somewhere here before. It's really not the distributor's battle to fight.

AL license the films for festival shows so I guess asking for another few may not be that difficult but may be costly as Hf isn’t there’s. And you can prejudge demand by saying if we ever wanted to do festivals would more people go and where and tot it up. There is a reason I suggest London mostly as yes it wouldn’t be really feasible elsewhere they kinda do it already when they show a few films at the PCC in late June usually iirc.
They would have to test support with films they have full rights to see if it works.
D

Shadow Cat said:
nowhere near £400 to get to Scotland and back.
Click to expand...

To be fair, I did actually look up rail prices for a laugh the other day in work, and a standard open return from Cardiff Central to Edinburgh cost £402.05. There was an off-peak fair that was I think around £188.00 ish, and I'm sure you can save by advance booking as well, but even I was surprised at the cost. I live in North Wales and I could get an open return for around £200.00 ish (£115.00 off-peak).

~AyaMachi~ said:
To be fair, I did actually look up rail prices for a laugh the other day in work, and a standard open return from Cardiff Central to Edinburgh cost £402.05.
Click to expand...

That was a big surprise to me too. I'm getting from Dundee to London and back again for exactly half that price: and that's for two people as well!
D

Neil.T said:
That was a big surprise to me too. I'm getting from Dundee to London and back again for exactly half that price: and that's for two people as well!
Click to expand...

I think off-peak single fair from where I am to Edinburgh was something like £56.00?

EDIT: Speaking of @Neil.T , is there any specific reason why you go to Glasgow SLA over Edinburgh? I know distance isn't really a factor; is the line up a bit different?

You do love Edinburgh, don't you? ~AyaMachi~ said:
To be fair, I did actually look up rail prices for a laugh the other day in work, and a standard open return from Cardiff Central to Edinburgh cost £402.05.
Click to expand...

I think TheDoctor mentioned they was at Uni so (I dont know their age) but I'd imagine they're somewhere between 16 and 30, if so then its possible to get a 16-25 or 26-30 railcard and get 1/3 off train travel across the UK. Advance ticket for £100 now only costing £66 almost covers the price of the railcard, return on that and a few more trips and you're sorted

Yeah every week travelling to Uni I save £15 so paid for itself in two weeks.
It does save a lot. A plane is still cheaper its just getting to Cardiff airport then as that needs better transport links.
Jesus to Edinburgh it saves £120... that was at peak times
Yeah the train is £120 in October 11am not terrible.
Its close price wise but I would chose flights because one hour over 6.

~AyaMachi~ said:
EDIT: Speaking of @Neil.T , is there any specific reason why you go to Glasgow SLA over Edinburgh? I know distance isn't really a factor; is the line up a bit different?

You do love Edinburgh, don't you?

I do, I do. There are a few reasons, actually. The first is that the Edinburgh line-up is spread out over an entire week rather than just Fri–Sat. I could of course just go to those three days, but since the Glasgow leg is first, I've typically already seen a couple of the films that end up being on at the weekend in Edinburgh.

Next is the fact that Edinburgh Filmhouse is a little more out of the way than Glasgow Film Theatre is, which is located right in the middle of everything, making it really easy to combine it with a bit of shopping.

Lastly is the number of days I'd need to book off work to cover both legs of the festival.

Never say never, though: I was quite tempted by the Edinburgh screening of Expelled from Paradise a few years back. In the end, I ended up being able to pre-order the Blu-ray of it only a couple of months later and save on more travel and accommodation costs.

It's also happened in the past that a film I missed seeing at SLA turns up later at the DCA in Dundee, either as part of their Discovery Film Festival, or as part of the Japan Foundation Tour.

~AyaMachi~ said:
You do love Edinburgh, don't you?
Click to expand...

I got married in Edinburgh, at the registrar's on the Royal Mile. Had the reception there and spent most of the afternoon in the Whisky Museum, I was slaughtered

Patient-X said:
I got married in Edinburgh, at the registrar's on the Royal Mile.
Click to expand...

I wonder what @Neil.T has in mind I'd recommend checking out this new interview with Andrew Hewson from Manga and James Dobbin from National Amusements if you get the chance, it's a pretty interesting look into UK theatrical. They mention in it that there are a few films in the pipeline for UK release that have already had US theatrical runs. Not sure off the top of my head what would fit into that profile though .Sounds pretty buoyant on the future of UK screenings in general, which I was glad to hear.

I think if my lot dont do Edinburgh SLA this year, if the Glasgow SLA has the parts I want to see, I'd go there instead on my own.

Can anyone tell me what the cinema is like in Glasgow please? Edinburgh is awful, the seats aren't darted so unless you're at the back 2 or front 2 rows, I personally could barely see the subtitles so it was an annoying watch.

Trains change in price for me. I got an Edinburgh return for about £36 for SLA last year.

-Danielle- said:
Can anyone tell me what the cinema is like in Glasgow please?
Click to expand...

It's excellent, I reckon.

Here's a view of the inside of cinema 1 (the main one), where the SLA films are shown: 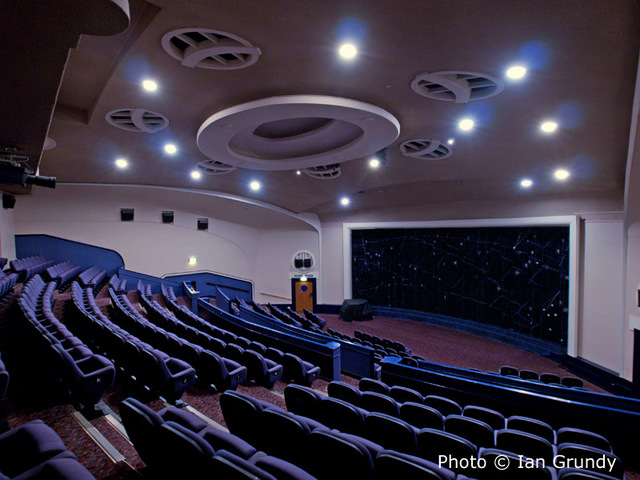 Thanks Neil, and how are the seats in front positioned, do peoples heads block any visible part of the subtitles please?

After missing everything said in Zombie Girl, I made a beeline for the back row for every film after that. Just awful.