This new set is just MVMs previous discs in a complete package right?

I don't know what the previous discs look like so I can't confirm that. Weathering With You vinyl Log-clean box artwork... even more, logo clean case sleeves!
Though I am a bit surprised the sleeves don't come with a title. But won't complain, as I know the titles by artwork anyway. And clean artwork, yay~
I

After nearly 7 years of watching TTG, its time to go back to where the animated Titans started 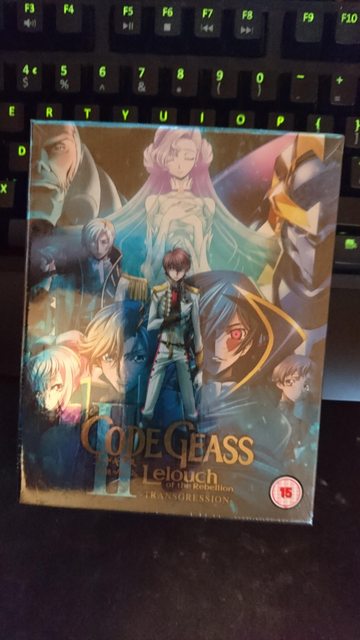 You guys are getting me in the mood for a Geass re-watch, and I really don't need that with so much anime I haven't even touched.

Are the movies worth it, or is it mostly recycled stuff?
Last edited: 14 December 2019

João Gomes said:
You guys are getting me in the mood for a Geass re-watch, and I really don't need that with so much anime I haven't even touched.

Are the movies worth it, or is it mostly recycled stuff?
Click to expand...

I've only watched the first one so far but it's mostly recycled. I believe by the third film it diverges for the sequel resurrection film.

João Gomes said:
Are the movies worth it, or is it mostly recycled stuff?
Click to expand...

They have a newly established canon for the sequel film.

It's been over a decade after watching the TV show, but I feel the movies aren't that diffrent to the tv show in terms of what is shown. More like the changes are much more in what is not shown. (One thing is pretty major, but the Trilogy itself doesn't really do anything with it and it pretty much kills the purpose of a certain other character's existance.)

The Trilogy's most nice part imo is, that it tries to stay serious for the most part. So the sober scenes stay and most of the lidicrous/drunk/comedy/randomness gets kicked out. Notably that makes 2/3 of the R2 part feel like a piece of cheese with a lot of holes, but it was kind of nice, to remind me, what that there was, to draw me back to the screen every week for the newest R2 even if it pulled one deus ex machina and weird twist after another. So felt in a way like a compilation of best ofs to me.

I'm kinda interested in the third movie if it continues/diverges from the series, but I kinda enjoyed all the different moods Geass went through, so to think it's all kinda serious only all of a sudden is a bit weird!
You must log in or register to reply here.
Share:
Facebook Twitter Reddit Pinterest Tumblr WhatsApp Email Link
Top