It would be remiss of me not to mention Yorkshire and London accents as that's where my mum and dad are from respectively, although I grew up in Southampton, Hampshire (which to other people is a farmer accent like the West Country one), but I don't think I have much of an accent at all.

I'm from the North East originally, but I don't really have a Geordie accent unless I start drinking with other Geordies. No trouble understanding it though even when sober. My mum is from Kent and still has the accent despite having lived up here since she was 6. Combine that with my having lived in Scotland for 8 years and nobody can work out where the hell my accent is from....

Yorkshire totally sounds normal to me somehow... @_@
But oh-oh-oh! I do recognize Cockney. That's the My Fair Lady accent!

.... Which reminds me of something else entirely else.
"He is pissed."
That expression is very, well. Low. Urban. Is there any way to say this more sophisticated but also retaining exactly that mood of like so much **** is going one, leaving one with a mixture of anger, desperation, frustration, light depression and just feeling to weak to do anything properly anymore? This "Screw them all, the world can just end if you ask me" sort of feeling.
"He's angered" is way to neutral for that. I kind of like saying "He's indignant." so far, but at least with foeigners a lot of people don't seem to know the word. "He is in an agitated emotional turmoil" makes me sound like a robot. "He is enraged" has more of a tint of somebody active loosing it, like having a totally red head or while screaming, which could also happen just because he's a child and stupid. Whereas "pissed" appears to me to have this sense of defeat, being knocked down inside of it, being wasted, having a legitimate reason to be angry.

... In the first place, am I even right with that impression of mood nuance? I've ever only have seen it used in that context, but on the other hand any exposure to that word isn't really real life either.

She didn't have the thickest accent, but she did give a lot of examples of dialect.

What you need is a thesaurus:
I found great synonyms for "angry" on the new Thesaurus.com!

Exasperated would be a good one.

Using "pissed" to denote anger and frustration is more of an American thing I find. Saying someone was "pissed off" is more appropriate in most places in this country. Depends more on the person and less on the place, depending on how much exposure to American media they've had.

@Luna I suppose another way to describe someone being under the influence of alcohol is something like:
intoxicated (more of a medical term)
drunk (not regional and probably more refined than most)
hammered
wasted
smashed
I could go on, but I won't (but I could) but I'm sure you get the idea.

D1tchd1gger said:
She didn't have the thickest accent, but she did give a lot of examples of dialect.
Click to expand...

Hadn't been aware of this until today. Wiktionary says this meaning is more the non North American meaning, so matches with what Adam-M says. Now that I think about it, I guess all the media I have been exposed to with this word is American.
(My English is such a mess. Damn.)

What you need is a thesaurus:
I found great synonyms for "angry" on the new Thesaurus.com!

Exasperated would be a good one.
Click to expand...

Haha, I'm visiting thesaurus almost daily these days. To my shame I had just searched for "pissed" and got a lot of synonyms for being drunk and kind of stopped there thinking, well, so vulgar as this word is, a reputable dictionary might not have that slang.
Searching simply for angry somehow didn't even occur to me. But exasperated does indeed sound exactly right. (Though, is that word more commonly known than indignant? At least it's more complicated to spell.)

But I do wonder, how does the image of being drunk match with the image of being pissed? Do drunk people like urinate a lot? I always thought they started vomiting. (<-- Having zero tolerance of alcohol I never got into "proper" drinking parties.)

Generally in the UK pissed means drunk, pissed off means angry. I'm not quite sure what the origin is. And yes, alcohol does make you want to go to the bathroom a lot.

Exasperated is more like frustrated, indignant is more like annoyance at something you perceive to be unfair. You generally wouldn't use them interchangeably.

I wasn't aware of the nuances between indignant and frustrated. (As frustration and the feeling of unfairness come hand in hand most of the time.) Thanks~

Another question popped up in my head... 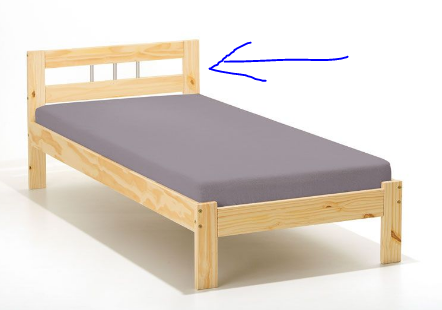 What's that particular piece of the bed frame called?

A headboard
(and digger beat me to it )

EDIT - I'm probably really sad here but I like this, it's like playing I spy.
Last edited: 26 December 2017

Oh, now I know the English name of the game. In German "I spy" is what would be translated as "I see something that you don't see".

If it's fun, I'd definitely be able to provide more material. (It was starting to bug me, if I'm overdoing it with my questions...)

OK, then next one~ 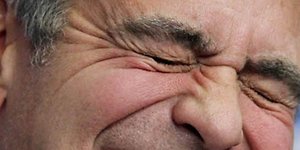 Couldn't find a better image, this one doesn't totally nail it.

What I mean is this expression like, when you go to the doctor and he comes with a syringe and you might be afraid and you close your eyes and make some wrinkles bracing yourself for "Oh, just let this pass soon". Or you're running your lungs burn and you're rallying your last energy reserves for an "Just a little little bit more".

↑ To endure something you want to be over is to "grit your teeth". It means to clench your teeth.

So no expression for what your eyes do?
Like when somebody strangles you, the victims will make that expression when fighting back as well. But most certainly they would not grit their teeth while gasping for air. ... Or more simplier, when you're stuck at the dentist's place. They probably will hate you, if you clench you teeth (with their fingers inbetween), lol.

Luna said:
So no expression for what your eyes do?
Click to expand...

To close your eyes tightly like that is to "screw your eyes up". (Not to be confused with to "screw something up", which means to make a mistake.)

Another possible expression for enduring something unpleasant might be to "suck it up", meaning to just deal with something without complaint. That one's probably more of an American phrase, though.

Ah! Right, suck it up! Totally forgot about that one. Have been thinking about the literal expression too much. Wiktionary doesn't seem to classify it as American through, merely as an idiomatic expression.
"screw your eyes up" completely new to me. Good to know as well~

And I just tumbled over another one:

Grit your teeth can also be used metaphorically. It doesn't always have to be literally clenching your teeth. Another similar expression is "grin and bear it" which basically means put up with the temporary bad thing because it will be better in the long run. To use your example, you'd grin and bear it at the dentists because going for a checkup now is better than having to deal with worse problems later on.

That type of roof is called a pitched roof.

Luna said:
That triangular shape of the roof of houses of this style. That have a name?
Click to expand...

The triangular part of the wall is called a "gable". The window in it is a "gable window". That side of the building is the "gable end" of the house.

Where are you getting these, Luna?!
I'm learning the meaning of words that I'm not sure of even as a native speaker!

I'd say it was a cross gable.
Top 15 Roof Types, Plus Their Pros & Cons 2017 - Read Before you Build! - Roof Cost Estimator - Calculate Your Roof Replacement Costs