Recently took up another project, I know, I do too much at once, but it's really because I may get bored doing one thing, so I occupy my time with something else.... anyway, the project I took up, was the redesign and animating the transformation of Adora to She-Ra, these are the things I have done thus far: 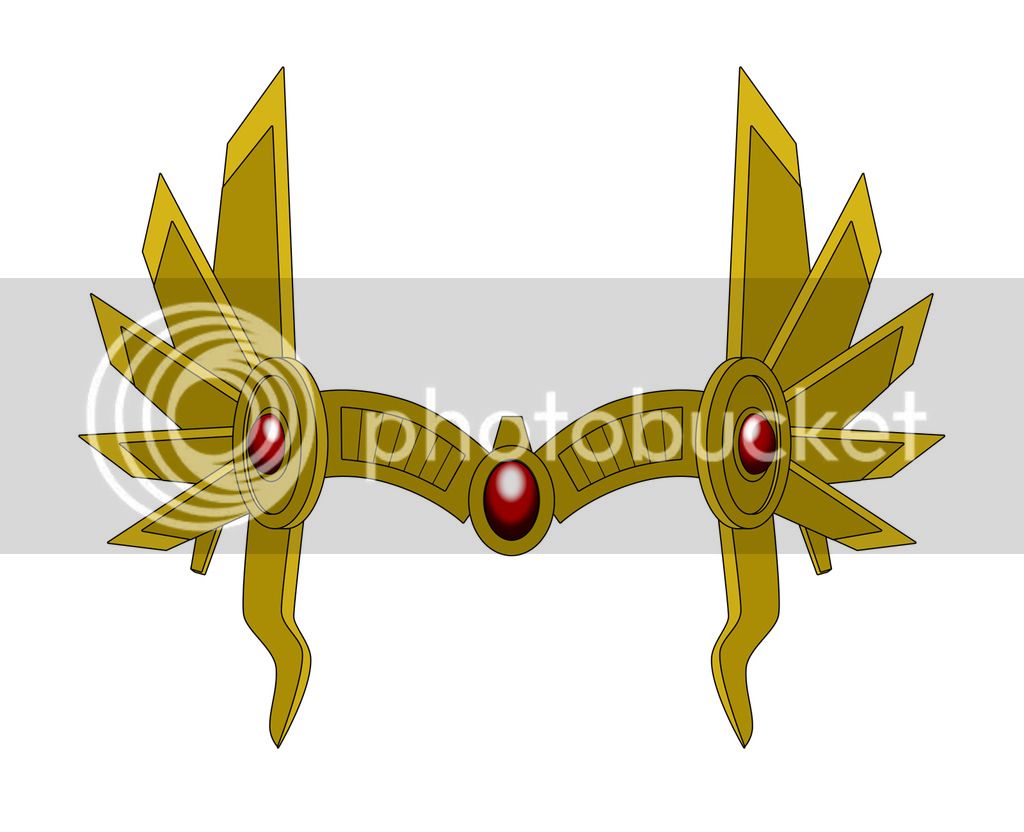 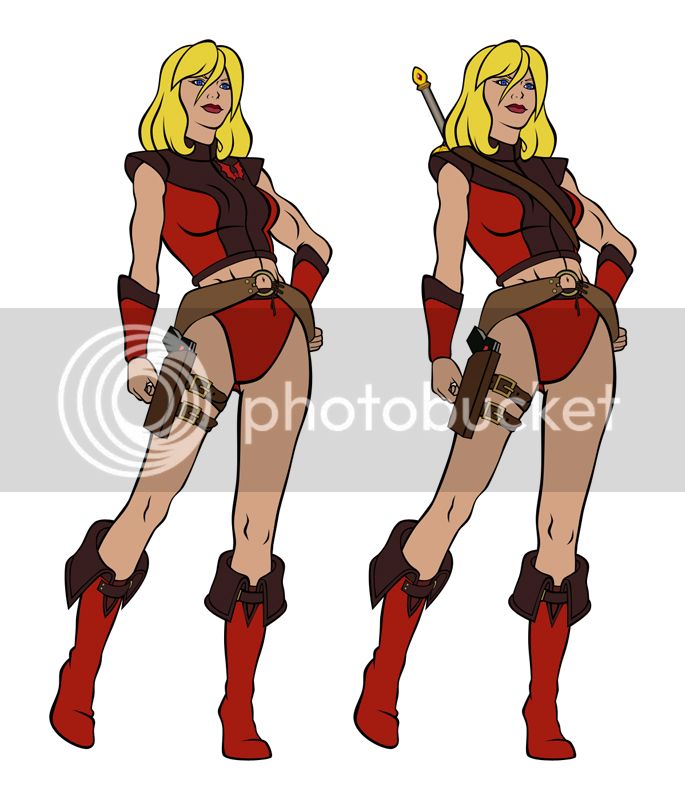 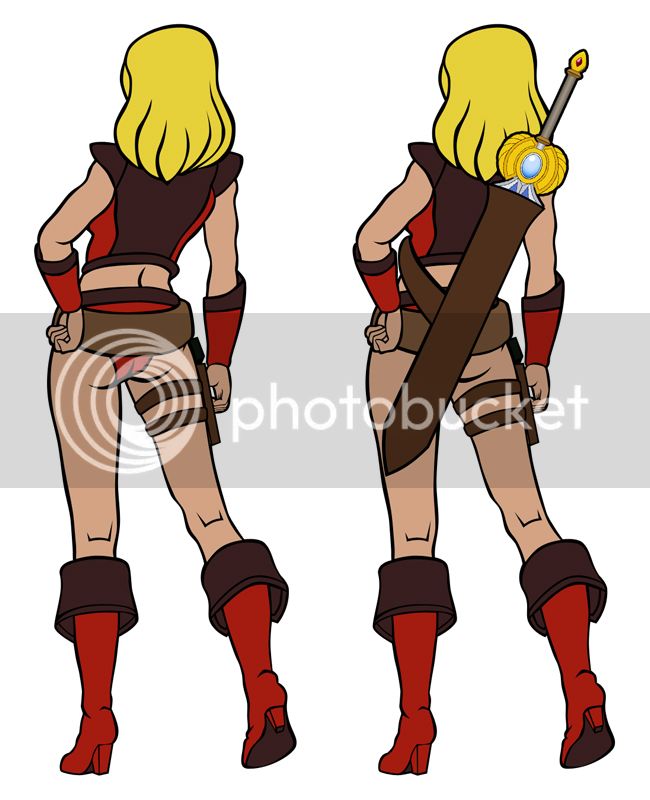 I finished this just a few days ago, as I took a small respite from my intro recreation, I decided I could at least knock out the end credits in a couple of days, which, I did! And here it is, enjoy

A couple frames from a digital reproduction I am doing of the She-Ra episode, Freindship 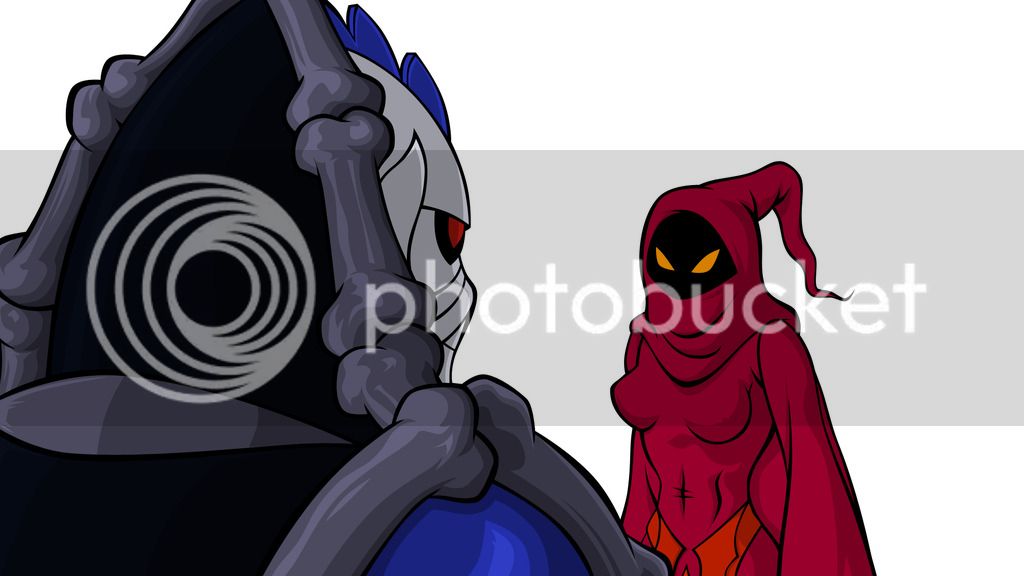 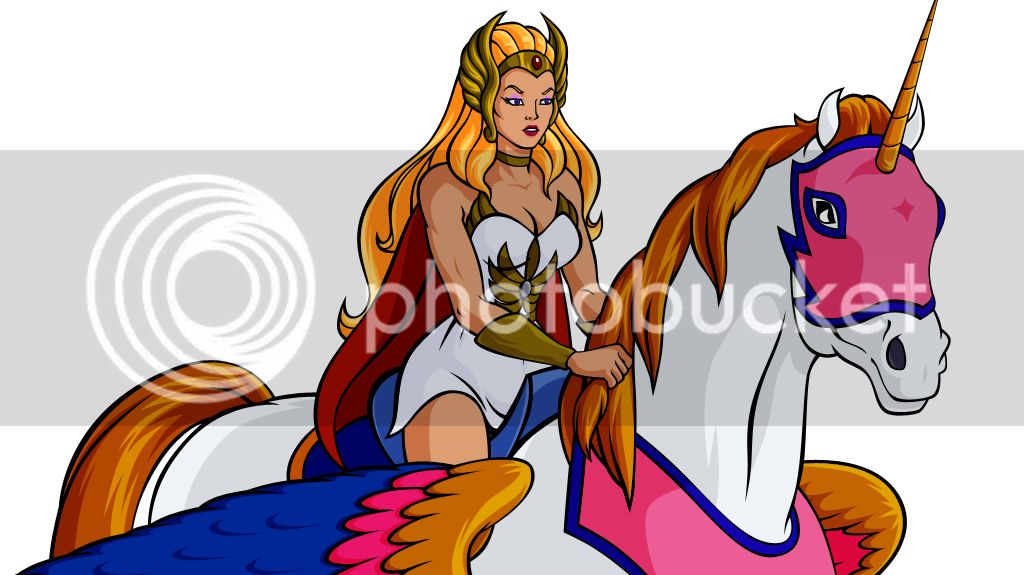 This is a WIP of Sheila from the Dungeons & Dragons animated series, but now she is a vampire:

Well would you Adam and Eve it? I actually finished the above pic sooner than I thought I would, heh, silly me! Anyway, here is the completed vampire Sheila: Cool! I used to absolutely LOVE that show as a kid. It was extremely dark for american animated TV in the 80's. I rewatched it a few years ago and still enjoyed a lot of it. It's a real shame that the final episode "Requiem" was never produced because judging from the script and the radio play on the Region 1 DVD it could have been one of the best endings to an american animated show ever.

As someone who's quite interested in digital art but has never had a stab at it.....what kind of software do you use?
Z

Yes, it was one of my fave shows as a kid and I still watch it with great fondness, I have the complete Region 2 DVD series and the radio play was very enjoyable and yes, it was a major pity that they decided to just end it with Cave of the Fairy Dragons and not animate Requiem! A few guys have tried to animate the episode down the past, though from watching the footage, I don't think I could get through the whole thing, which is a shame, as I have read the script and really would like someone to do a decent treatment!

As for my digital art, I just use the same program that most others do, Photoshop, though I have CS3 Extended, not the most current one, that you can only get as part of a subscription, which is a weird direction for them to take! But the way I did things here with this picture, is I used the Shapes tools for each of the colours and shading, mainly the Pen Tool, where I clicked an Anchor Point at points in the shape (always join back to the first point), then added bend Anchor Points to create the curves. The shade and shine was done the same way, though merely with black and white layers, then I changed the Blend mode and sometimes the Opacity to get the right effect: Shade layer 1 Blend Mode set to Overlay, 23% Opacity; Shade layer 2 left the Blend Mode as Normal, 40% Opacity; Shine layer Blend Mode set to Colour Dodge, 60% Opacity. I'm sure others will have different ways of going about things, but I find this to often be a quick method!

MyPaint in Linux is as good as you need for that kind of thing. It plays well with a Wacom tablet out of the box, and is more akin to Painter. The bezier curves can be run off in either Inkscape or GIMP and just imported as needed. I used to do a lot in Blender but drifted away from it when they changed the interface.

OK, to go with Sheila's new state of being, she has gotten a new make-over, though I may change it a little, plus I need to add the shade & shine:

OK, my vampire Sheila from the animated series of Dungeons & Dragons is finally finished, to appear in issue 24 The Dead of Night:

Phew, it's taken ages just to do this one background for this sequence and I still have 3 more to go... so boring, but they have to be done! Anyway, here is another of Battlecat, but this time with one complete the flashy backgrounds:

Tut tut, I'm going to back to the old way, not posting anything for smegging ages, my bad! Anyhoo, a new piece featuring my reboot Adora standing side-by-side with the classic Adora from the Filmation animated series:

This is part of the animation for the sequence in the She-Ra episode Friendship that I am reproducing, where Kowl is flying alongside Bow and complaining on their way to the Fright Zone! It's not the entire sequence, clearly, but it does display some of the cels that I will be using for the sequence!
Z

I think I'm probably appreciating your work more than some, but this is all from my generation (sort of) so well done mate for keeping the classics alive.
Z

It's from my generation too, plus 80s to midish-90's is my fave era for Western animated series anyway, so I do believe in making others aware of it's awesomeness!
Z

A bit more animation, a very short vid, a comparison of the original sequence and my digital reproduction:

OK folks, another pic for ya, this time of Hordak, from a scene where he sprays Bow with sleeping gas, after his robot Horde trooper fails to capture him. There's some animation to do here, so that will take a little longer to get done!

More animation from my digital reproduction of the She-Ra episode Friendship today, it's the completion of the sequence from the above image. You may notice a little smoother animation here, among the addition of 3 tone shading, I have also corrected some anatomy issues, hope everyone likes:

Who wants to see all the creative stuff I do when I'm not watching anime?