Alright, another segment from my 4K UHD reproduction of the classic Dungeons & Dragons episode The Dragons Graveyard has been re-animated! Very brief video unfortunately, just 5 second long, but some considerable hours has gone into it, I sorted out her eyes, which were a little wonky to say the least in the original, plus a frame of inbetweening at one point just to make things a little smoother!

I decided to expand my most recent clip from my 4K UHD reproduction of the Dungeons & Dragons episode The Dragons Graveyard, as I didn't like how abruptly it ended! Hope you like:

Well, not even a week gone by and I complete a new clip from my D&Dc episode reproduction:

This is a frame from the Jem intro sequence; I was speaking with someone on FaceBook and they liked what I had been doing with my She-Ra episode digital reproduction and he made a suggestion on me reproduction the Jem intro sometime, as it was her 35 anniversary this year... obviously I declined, but said I would at least produce one frame from the intro tonight, this was the quickest and easiest frame I could find to do.

I won't be starting up any new intro reproduction projects until I have finished one of the ones I am currently doing, this is just the one-off pic.... for now! 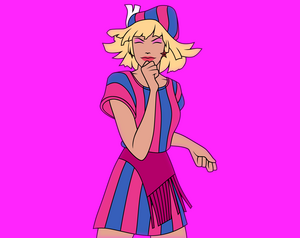