Cowboy Bebop (live action) eps 9 & 10 (complete)
Probably best described as fine.
Sets, props, etc. were quite good, music of course was fantastic and I loved this Faye. I can't really remember what I thought of her in the anime, but having watched a rant about all the changes sounds like they sanded off some stuff that I probably wouldn't have liked.
Jet was as I remember, but Spike was a bit more dour playing into the whole plot with his past haunting him being much more in the foreground here than in the background in the anime. Bringing it to the foreground meant having a lot more Vicious who was like a menacing phantom in the anime (from memory he only made 3/4 appearance in a 20 something episode show), but here he is just a whiney edgelord for the most part. Then there's Julia. I thought she was dead in the anime, but the rant mentioned above corrected that. Here she starts as a timid woman trapped with this ******** of a man, but suddenly becomes a mastermind coming up with genius plans and finally shooting both Vicious and Spike and taking over the Syndicate! I don't mind the twist, it makes it it's own thing a bit more, but did feel a little unearned.

Quite a random series, baddie of the week style for the first few episodes before having a random ending. All the songs

The Great Jahy Will Not Be Defeated! episode 17 Futon.

My Senpai is Annoying Episode 8

The Great Jahy Will Not Be Defeated! Episode 17

Ep 8 of The Vampire Dies in No Time 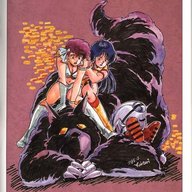 Aria-The Crepuscolo-what a wonderful surprise! I knew that it was coming out this year but didn't know when. I found out it was released a few months ago so I jumped on it-it was a wonderful final end to this fantastic sol series. A very fond farewell to Akari, Alice, Aika, Alicia and company-thanks for the memories!!

That's the first series complete and now into the first handful of episodes of the Netto-hen reboot.

AMAIM: Warrior at the Borderline - Episode 8

The now obligatory "it's about the characters not the mecha, maannn" episode! I still think Vifam did it best. Which was actually a decent episode, I like the fact that with 2 cours Kyoukai Senki has the room to do this sort thing and does seem to using the time wisely so far.

Still can't make my mind up about Sakugan, entertaining but I find it an odd show at the same time.

I picked the Blu-ray up earlier in the year and watched it Friday. I've watched it a number times over the last 10 years or so, and I find it a fascinating collection of animation every time. It looks absolutely glorious in HD and it still blows my mind that it was created by someone painting on lots of bits of celluloid and then putting them all under a camera one by one.

1987 was a good year for anthology anime!!! After watching Robot Carnival I had to rewatch Neo-Tokyo on Saturday. Maybe not as well known as Robot Carnival but just as good imho and looks just as amazing too. The look and feel of each vignette is easily recognisable if you're familiar with each director's work and it does feel like Rintrao took some of Labyrinth's themes into Take the X Train. Hopefully Discotek might bring us a nice Blu-ray of this as well soon.

I went into this with a really open mind and it has been interesting to read people's comments on here. I honestly thought the 1st episode was just terrible, like a cheap pastiche of the original. I didn't think the second episode was much better either but I'm going to stick with it.

I quite liked Plastic Little, it's an easy watch and as you say a lot of effort went to into the animation

Had Blu-ray for a couple of years now and it's on the watch list for next year.
Last edited: 30 November 2021

The Fruit of Evolution: Before I Knew It, My Life Had It Made Episode 9

AUKN Staff
The Fruit of Evolution: Before I Knew It, My Life Had It Made episode 9 Power struggle.

The Vampire dies in No Time episode 9 Ghoulish troublemakers.

Ep 9 of The Vampire Dies in No Time

Between the sales today I decided to try and clear the backlog with The World of Narue: I found the lead characters, Kazuto and Narue, bore a striking resemblance to Keitaro and Nene from Love Hina, except Narue was much nicer than Nene. And the VA of Magical Girl 4 looked very similar to Steel Angel Kurumi. Apart from that, it was an entertaining love story of a bunch of school kids and aliens mucking about outside school.

Latest title from my backpile, certainly an interesting spin on someone suffering from social anxiety.

AUKN Staff
Banished from the Hero's Party, I Decided to Live a Quiet Life in the Countryside episode 9 Face to face.

The World's Finest Assassin Gets Reincarnated in Another World as an Aristocrat episode 9 Addiction.