Princess Connect! Re: Dive Episode 13 Forgotten. (Complete. A fun easy-going series that manages to incorporate some rather serious moments throughout especially towards the ending.) 3.5/5

The World God Only Knows Episode 1-2

This is fine, it's reasonably paced so far and has some entertaining story beats, but it suffers the familiar problem where I find the side characters more interesting than the main. I think I might rotate it out to something else for a while, probably Ghost Sweeper Mikami.

Kind of feels like the end of the year should have been the S1 finale? Fool Kaguya is pretty great anyway.

Orange Future-it was a good bookend to the series and basically it explained most of the paradoxes and open ended things the series didn't bother with.

Charlotte Episodes 8 to 13 plus OVA (complete) 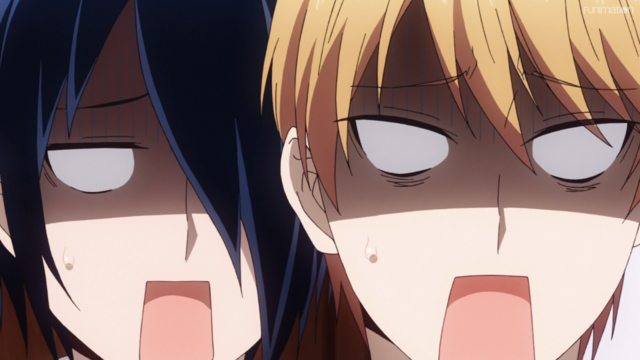 This is the first I've seen GS Mikami in about ten years - the show is... hornier than I remember. A couple of the fan-service parts in the first episode are decidedly not cool, but it does seem to have dialled it back a bit in the second, so I'm hoping it's on a more even keel now. That aside, it's generally good fun; there are some neat ideas for how Reiko fights the ghosts, and some nice little touches like a ghost holding up a cue card with her dialogue on it, or the bank tellers randomly turning out to be a crack commando unit.

This is the first I've seen GS Mikami in about ten years - the show is... hornier than I remember. A couple of the fan-service parts in the first episode are decidedly not cool, but it does seem to have dialled it back a bit in the second, so I'm hoping it's on a more even keel now. That aside, it's generally good fun; there are some neat ideas for how Reiko fights the ghosts, and some nice little touches like a ghost holding up a cue card with her dialogue on it, or the bank tellers randomly turning out to be a crack commando unit.
Click to expand...

The ova is pretty funny too, it takes the tv series horniness and dials it up to 10.

Fruits Basket s2 e13
Back to school after the summer holidays.

Shachibato! ep 12 (complete)
A fun fantasy series, but nothing spectacular. The end hints at a second season, which I would probably watch, but if it doesn't materialise then so be it.
The designs are your standard cute girls from gatcha games, cute enough, but not as good as the other gatcha game anime Princess Connect (see below). Animation was average as well.
6/10

Gleipnir ep 13 (complete)
Memories.
Had a fairly straightforward premise of a battle royale for a mcguffin, but got a bit complicated towards the end with what I thought was just an edgy side plot turned out to be pretty important and then didn't end in a particularly good way with the mcguffin not reached nor the new extra plot fully resolved.
Most of the monster designs weren't that interesting, but the fight scenes were pretty good.
6/10

Woodpecker Detective's Office ep 12 (complete)
The big reveal. Can't decide whether it was a good twist or actually a bit of a let down.
I feel pretty much the same as @HWR felt about the show overall, occasional interesting episode in this crime-of-the-week show, but no likable characters and although the culprit of the overall plot was an interesting take, she wasn't actually a culprit in the traditional sense as she persuaded people to kill themselves instead of actually being a murderer! Which felt a bit of a waste.
5/10

Princess Connect! Re: Dive ep 13 (complete)
Final fight?
Started out a very funny fantasy SOL, but slowly seeded in an actual story which was actually quite dark, unfortunately like a lot of shows this season it seems it didn't actually finish the story, but had a better end than most. So Cygames, just like with Uma Masume, got me wanting to play the game, unfortunately I would need a third party app store, a VPN, oh and to learn Japanese!
The character designs were great and the animation was very good, especially in the fight scenes, apart from the odd montage slide show.
8/10

And so endeth the Spring season, there were a few gems, but probably the worst season in the 2 and a half years I've been watching seasonal. Actually a bit of a split season looking at my scores with six 6 or below and six 8 or above, but without checking the average score is probably the worst.

Princess Connect! Re: Dive 13-I enjoyed it but if ever a show needed a 2nd season-this is it. There were so many unanswered questions and open ended incidents it was like trying to eat a half baked cake.

Merry Christmas Mr Lawrence (Film) Added my thoughts for this on the films thread.

Chihayafuru episodes 16-25 (Complete. An interesting series that combines some of the more typical tropes of sports anime with the intensity of Karuta, a physically and mentally demanding card game-and a competitive sport in Japan-which makes for some rather tense matches. The cast here are rather likeable and I’m looking forward to watching more.) 4/5
Last edited: Thursday at 8:58 AM

Today I watched Lu over the wall. There is only one word I can use to describe it and that is FUN. It's like Promare in the sense that there is no deep intricate plot here but just amusing surface level fun and I am coming around to appreciate that so 9/10 for me.

Some good ideas but the writing was weak in the last few episodes and there just isn't enough room in 12 episodes to explore those good ideas which something that really frustrates me with the current everything is 1 cour anime production structure.

The Castle of Cagliostro (Blu-ray)

Not spectacular but a lovely easy and entertaining film to watch.

HWR said:
typical tropes of sports anime with the intensity of Karuta, a physically and mentally demanding card game
Click to expand...

Fun fact, competitive Karuta is a sport in Japan.

Yeah my little thought summary didn’t quite make that clear-I’m impressed as to how tense the games managed to be!

Kabukichou Sherlock eps 21-24 (complete)
Cracked teapots!
An interesting take on the Sherlock franchise. The first half was mainly focused on a case of a murder dubbed Jack the Ripper whose MO is similar to the real one and the second half dealt with the aftermath of the case and specifically the reaction to the events by one of the characters who was affected personally by the killer. I would say the first half was the stronger of the 2.
Being Production I.G. the production was pretty good, although I didn't particularly like the character designs. The soundtrack was pretty good though.
7/10