Yeah. The last boss battle was really infuriating and the second game is pretty dull all around. The main characters keep on being annoying on the third one and there's one annoying boss fight but otherwise the third game is pretty good and i recommend it if you haven't played it. It even has Malcom Mcdowell in it.

Winkuru said:
Yeah. The last boss battle was really infuriating and the second game is pretty dull all around. The main characters keep on being annoying on the third one and there's one annoying boss fight but otherwise the third game is pretty good and i recommend it if you haven't played it. It even has Malcom Mcdowell in it.
Click to expand...

I actually played Killzone 3 first. I bought Killzone 2 because I heard people liked it more than 3 and was like £1 lol. just completed Sakura Wars it was a fun game.

It's been 5 years since I last played Persona 4 Arena and while I liked the combat, the story was a mess due to continuity issues with each story mode, so it was a nice surprise to find Persona 4 Arena Ultimax to be a lot better in that department. While it's basically a P3 & P4 fighting game and how the first one covers the P4 side of things, Ultimax covers the P3 side of things but set in the P4 city and a new villain that pretty much wraps up this fighting game storyline. It's alright but I found it pretty forgettable so I skipped it. Gameplay was still fun at least though the final boss in the story mode is daft. Going to keep it brief since there's not much to say.

AUKN Staff
Having finished Majora’s Mask (and loving it as always) I decided to play through the two recent South Park games, namely The Stick of Truth and The Fractured But Whole. Both are fun but have some repetitive gameplay and the main reason they work for me is down to the spot on humour and references found in almost every corner of the map. I’ve also been rewatching some episodes day by day which is a good laugh.

I’m now replaying Batman: Arkham Asylum as part of the Return to Arkham Collection. Outside of some iffy character models and redesigns the remaster is decent.

Just finished Cold Steel 2, great game but not without its issues. I have the thirs but will probably dive into Xenoblade before I start Cold Steel 3.

AUKN Staff
I’ve started playing Xenoblade Chronicles Definitive Edition and already have a load of sidequests to do. The accents are...charming so far.

This game is so good! And the remaster looks great! So happy they've done it. 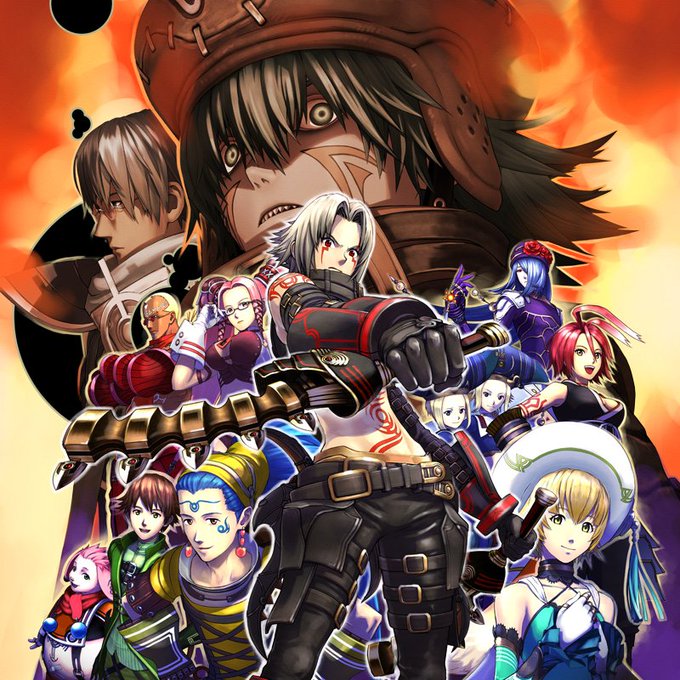 .hack//G.U. is split into three games during its original release, with a fourth game added for the Last Recode collection. Rebirth, Reminisce and Redemption follow one massive storyline that covers a lot of content, especially with its story and characters as you progress. Reconnection serves more as an epilogue to the story and wraps up one of the story elements kept ambiguous in the original trilogy. The story overall for .hack//G.U. is one of the strongest aspects of the game series as a whole, with a lot of interesting twists, surprise cameos and great character development throughout with our main character Haseo. The rest of the cast also share some spotlight though there are some that could have been kept off-screen. I should also point out the artwork is done by both Seiichiro Hosokawa and Yoshiyuki Sadamoto, the latter of which worked on Evangelion, Nadia and the upcoming anime series Great Pretender.


Before delving into the gameplay I want to shoutout .hack//G.U.'s music score, which is the best part of the game series by far. Composed by Chikayo Fukuda who had worked on Capcom & CyberConnect2's Asura's Wrath, her music throughout this game adds a lot of atmosphere and tone to the story and characters. Ovan's theme, for instance, creates a mysterious aura to the character which works really well and makes him more memorable. Other highlights include Flying Dawn, Welcome to The World, Hulle Granz Cathedral, Morrigu Barrow Wall, Lose Resolve, Beyond the Steep Mountains, Illusion of the Eight Phases, Shallow Dreaming, and The Hope of Dawn.

.hack//G.U. is an action role-playing game with an MMO feel to the design. As Haseo, you play 'THE WORLD' (pronounced the same way Dio says it) where you can interact with other players, go on quests using a special keyword system (take 3 keywords and 1 server type to create a dungeon), take part in a battle arena, buy items and weapons, and even assist NPCs by collecting mini-monster animals and other creatures. Every now and then you'll get an email which requires you to log out of your game. To me, this is what makes .hack stand out from other JRPGs because it's a very unusual mechanic to have. When you log out, you can access a forum, news, fanart which can be set to your background, emails and also a Crimson VS mode which is a card game that plays in the background while you go through the MMO game normally. Crimson VS is actually pretty entertaining though it does rely on some luck if you want to collect all of the cards. You can also view cutscenes and set BGM to the menu while you are checking these features.

My main criticism with .hack//G.U. is the dungeons themselves. The concept is perfectly fine by all means, the idea of going through the dungeon to defeat a monster or reach the treasure chest. The issue that I have with the dungeons is the plain, linear and tedious designs that lack quality in comparison to the town worlds that .hack provides. When I kept playing, I couldn't help compare the dungeons to the very first Hyperdimension Neptunia game on PS3 which had this exact problem. If this game had the level design that Sword Art Online games have had, I reckon this would have made .hack much better and Iooking at the reviews I can see why this game got just above average reviews.


https://twitter.com/i/web/status/1270072989921480706
The combat itself is pretty decent but it can start to tire at times which is why I often take more breaks than progressing when it comes to this game, which is a shame because everything else is very strong in quality. It's quite possible that the developers didn't have much budget to go around. Another slight criticism is the cutscenes. This has the Kingdom Hearts style of presentation where you have characters interact in basic fashion and the occasional smooth animation which I really love. I just wish that the developers tweaked the cutscenes so that you can actually have their mouths move in the basic layout because it does look pretty awkward in a number of places. Outside of that, the animated cutscenes do hold-up pretty well with the remaster and are not rough or upscaled to a messy degree. Unfortunately, the animated cutscenes in Reconnection are not very good and feels out of place when you look at the previous three games in the .hack//G.U. series, especially when you have very choppy framerate which feels quite jarring with 3D models.

The progression for .hack//G.U. is at a pretty decent length. The main trilogy is estimated to take 20 hours each, though I managed to spend at least 16 hours for Rebirth, 15 hours for Reminisce, and 17 hours for Redemption which is pretty good considering most of the non-story content was also being covered along the way. There is plenty of post-game content available and a ton of rewards especially when you carry over the save data file from one game to the next. Reconnection will take at least 2 hours overall which is short but perfectly fine by me since the main trilogy ends on a pretty solid note overall.


https://twitter.com/i/web/status/1267896107646009345
Overall, .hack//G.U. Last Recode is a welcoming package for newcomers and die-hard .hack fans. This is my first time delving into the franchise and I was able to understand what was going on despite the fact that this takes place after the events of the first .hack series. Included in Last Recode is a Terminal Disc which recaps the events of the first .hack series and a Parody Mode where both the English and Japanese voice cast have some fun with select scenes. The trophies in this game are mostly easy to acquire with a few that will require some grinding if you have extra time.

.hack//G.U. Last Recode is available to own on PlayStation 4 and PC.

My backlog so far: completed Xenoblade Chronicles Definitive Edition...it was a fantastic game. I'll be taking a break to catch up on some anime before i play Future Connected. AUKN Staff
I recently completed Xenoblade Chronicles Definitive Edition for Switch. Put in roughly 90 hours overall and got all the affinities/heart to hearts sorted out alongside unlocking every characters’ extra skill trees. Sadly missed out on some timed quests and didn’t max out every ability but am satisfied with the run I put in.

The game itself is quite good though the sheer number of sidequests was initially quite daunting (and The quests themselves were often very repetitive) but thanks to the convenient “!” Markers they were usually manageable (trying to get certain items to spawn like ice Cabbages for instance was rather tedious though.) I'm also playing Xenoblade - I'm only about six hours in, so I've got a lot more to go!

I owned it on the Wii, but I struggled to get into it. The camera controls and the ugly graphics were just too much for me and I couldn't get into the battle system. I'm absolutely loving it this time around though!

I also got Taiko No Tatsujin (and a few DLC songs) in the current PS4 digital sale (I already own the Switch version, but each version has different songs). It's really a lot of fun and it's got an awesome selection of songs. I never imagined one game would have music from Babymetal, Dragon Ball, Monogatari, Haruhi and Frozen!

Best of all, it's currently under £10 - absolutely worth picking up at that price!

Moderator
I've been playing a stupid amount of different titles recently, making it hard to actually complete anything...

Astral Chain - I finally went back to this one recently, and i don't honestly know why i didn't get the time in before to play it. This is stupidly good fun. Love the visual style of the game and the combat feels really good. It isn't cumbersome even though you're controlling the two at once. I like the point of needing to return to other stages when you unlock more to get everything, so more reason to repeat stages on a second playthrough.
Dead Space - I'm playing this when i stream at the moment as a good blast from the past. Doing a plasma cutter run from fresh(so no NG+) and it's surprisingly easier than i remember it being. Still a great example of a horror game when EA did good games.
Civilization VI - I went back into this again as i always do, but i never had all the expansions until now. Man, knowing how to build cities fast really gives you a massive boost at the start of the game. Turn 40 with three cities and a lot of luxuries is so good.
Add in Animal Crossing(with the new update tomorrow), Smash Brothers with Min-Min, Xenoblade Chronicles Definitive Edition and more, i need to focus again...
You must log in or register to reply here.
Share:
Facebook Twitter Reddit Pinterest Tumblr WhatsApp Email Link
Top