Well I finished volume 3 a couple of days ago but went no further so far, if anyone hasn't read it and is curious, not spoiling but what is adapted ends in volume 3, I'm thinking of making time for volume 4 in the morning

Obligatory abyss meme (though I think it's a bit of a spoiler with the dad puns, I haven't really noticed him using any yet) 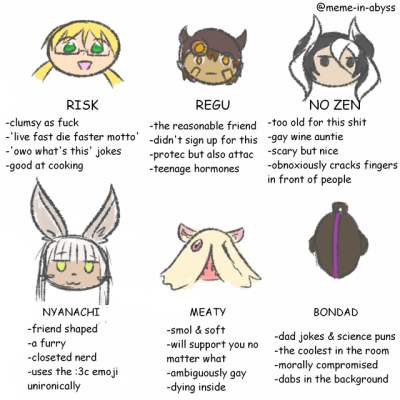 Irredeemable... I mean father of the millennium!
Really got into the mood where I couldn’t put it down, I’ll really be looking forward to volume 6 once it’s available and of course, bondrewd’s film, which I thought would be 1 volume but it’s the majority of volume 4 and all of volume 5, so there’s plenty of stuff for them to put in the film, I’m just wondering what makes the cut, though if they can shave down some dialogue heavy parts it actually won’t change things that much

My last “obligatory” meme for the thread: Now now memes are nerver obligatory but they sure do help us in our scientific pursuits to get to the next layer. They are like little cartridges full of joy :3 I'm not sure if the mangaka takes long breaks, but there's a bit of a wait for volume 6 (possibly a wait for volume 7 in japan) and a longer wait before anyone sees the movie, so to perk up the mood for abyss fans a bit, out of work - fueled boredom (I became just an extra pair of hands during the weekend) I thought of something; 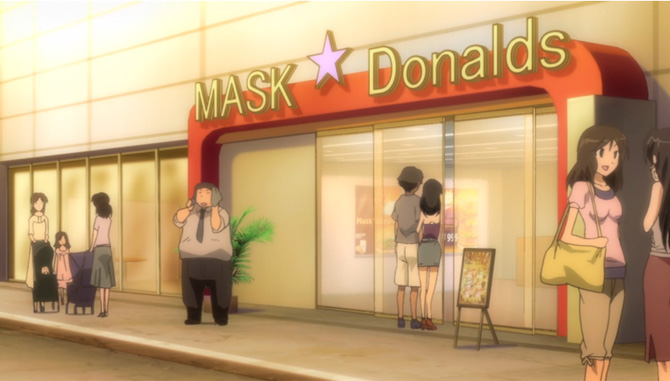 Bondrewd opens a McDonalds, some obvious names for it would either be McBondrewd's or McDawnalds (he calls way too many things dawn...)

what I'm wondering from others is, how likely is he to use Nanachi as a mascot for his chain restaurant, and what would be on the menu?

and no, we don't have elevators in McDawnald's. I'm sure you know why

But I have a great one from Volume 5 lol

The volume 5 menu surely has the darkest clown to put his foot forward...

Perhaps an essence of returning meal? Like their breakfast menu?


a rare but possible toy in the "happy" meal (we've gotta think of better than a "dawn" meal) could be a white whistle. A real one

Well I don't see you coming up with a menu

I am probably going to hell for this next idea...

You don't see much Abyss Merch other than something like a shirt or different sorts of fancy CEs, not much in the way of official gear

Some people if course, make specific Lego sets like this one based off trump;

So I was thinking, one of the things that makes Abyss something special is the scenes it is set in, so naturally I thought of some sort of 6th layer elevator playset!
You can build the elevator scene with working elevators, the figures included would be Nanachi (human) Nanachi (hollow) Mitti, a hollow or two and Bondrewd. Any standard sized figure can fit in the elevators (sorry, Ozen!)
So will it fly off the shelves? Are there any more playset ideas, for example, layer 4? Am I definitely going to hell?

As popular as Lego still is I would guess, hard to say as I haven't looked at Lego in a loooong time lol. Don't fret you are not going to hell since we used to have action figures coming from 18 rated films

Actually I do have a game idea of my own, but it's more of a forum game.

So name an anime character and try to guess how well they would do in the Abyss. Next poster agrees or disagrees then chooses a character themselves.

Guts: I love me some Berserk so this was an obiose first choice, and if Guts went down into the abyss I could see him getting to the 4th/5th layer. Might put up a good fight against the Orb Piercer as well. Since I don't know (yet) what is past Bondrewed's arc I can't comment beyond that but I'm not sure he would go down to the 6th layer.

I kind of agree on guts getting to the 6th, he's brushed off the kind of stuff the curse would put him through if he had to ascend, but he would have to stay at the 6th (unless to Od of the Berserker armour counts as a non - human being hit with the curse)

I'll say the God hand, take your pick of which (Femto included) convince me the abyss isn't the interstice

Captaaainuniverse said:
I kind of agree on guts getting to the 6th, he's brushed off the kind of stuff the curse would put him through if he had to ascend, but he would have to stay at the 6th (unless to Od of the Berserker armour counts as a non - human being hit with the curse)

I'll say the God hand, take your pick of which (Femto included) convince me the abyss isn't the interstice
Click to expand...

I think you worked out how it's going to end, they finally reach the bottom of the abyss and Riko sacrifices her mum and Reg to become an apostle . As for the god hand I choose Femto then, imo I think divine characters like the God Hand or overpowered characters like Saitama or Goku would in general have absolutely no problems with the Abyss unless the Manga introduces something crazy later on. So I reckon Femto would reach the bottom without issue from the curse or the monsters.

My next choice Eren Jaeger of Attack on Titan fame. Tricky since he has his skills as both a Titan and a human with mobility gear. But I think he would struggle with the 3rd layer.

Riko: hey mum, remember when you "sacrificed" me and left me in orth to go pursue your own ambitions?
Lyza: uh, yea? Why do you say
Riko:Chuckles

Eren is an interesting choice, I'm sure titan shifters are effected by things like the abyss curse the same way as humans, and ODM gear can get any of the scouts/soldiers down the abyss quickly they are trained to cut napes with heavy swords basically in mid air so I think even many AoT soldiers will make it past layer 3

Besides, eren can harden his whole titan as of 3B, he could just do that and drop through layer 3, the interesting thing I want to know is the effect on titan transformations, does standing up in a 15m titan hit you with the curse? Does the titan get hit with it?
Apart from that, titan shifters can get past layer 4 because orby doesn't like things bigger than him!
Layer 5 is the tricky one, it depends on who the shifter is and whether we're placing bondrewd as a threat, layer 5 is basically a big ocean with constantly collapsing terrain, not good for big titans, bondrewd would have plenty of relics to take care of sluggish titans that can barely move in the 5th layer.

Eren often uses his titan for many strategies, he won't get past layer 5, but the beast titan is a 4D chess player, everyone seems to be in the right place at the right time, if he jumps out of his titan at layer 5, he might be able to slip past bondrewd.

curse - wise they'd be able to go through any layer as I doubt the curse effects something that's basically stone, they'd be able to avoid most threats on the first 2 layers being one of the fastest in their series, but will either be pursued by a splitjaw at layer 3 since it'll eat anything that's like a relic or be stuck at layer 4, regardless of speed the orb peircer can look 2 steps ahead

Oooh left field, but I might need to defer for a real answer from someone else as I haven't seen Land of the Lustrous. Going from what's on the wiki about this character he/she seems to be a speedster which would make getting through the early layers very simple. They might be slowed down by the tunnles in the third layer, especially since the Neritantans (yes I did look the name up for a reminder) have that ability to block paths by filling up gaps with their bodies, and the predators such as the splitjaw of course would be a hindrance. And as you say if they did get past that then the orb piercer would be game over.

I thought of a good one and it's in the spirit of the show a bit, this one needs to be a pair due to the nature of their power. I choose Digimon Tailmon/Gatomon (depending on the language) and Hikari, I chose Gatomon specifically as the angel digimon are the more powerful ones and we see more of her than Angemon, plus honestly the others were always a bit crap despite their designs. And Hikari is there so she can digivolve whenever, so this one is more of a how far can Angewomon protect her escort quest. Would angewoman be better than Reg?

I don't think so myself as the ability to fly in the curse filled abyss would be a pretty bad ability to have. And I'm unsure if digital monsters would be curse resistant as a robot is.
A

Just a heads up but you can stick with a simple "they" for characters from that series as they're genderless rocks. It's what the official translations go by.

Edit: Also really recommend Land of the Lustrous. One of my favourites from that year especially with it's visuals and story.

ActionFaust said:
Edit: Also really recommend Land of the Lustrous. One of my favourites from that year especially with it's visuals and story
Click to expand...

I will give it a look thanks I know when the CE came out from MVM it was spoken highly of.
A

Vincentdante said:
I will give it a look thanks I know when the CE came out from MVM it was spoken highly off.
Click to expand...

Ah sadly MVM didn't give it a CE. Would've loved a CE for that especially with it's soundtrack.

ActionFaust said:
Ah sadly MVM didn't give it a CE. Would've loved a CE for that especially with it's soundtrack.
Click to expand...

Oops you're right I was thinking of Princess Principal, not sure why I confused those.
Last edited: 26 May 2019
A

Hmm perhaps Berserker (Heracles) from Fate/Stay Night. Aside from being incredibly resilient his God Hand ability gives him an extra eleven lives as a result of him completing the Twelve Impossible Labours. His combat ability is also among the best in the Fate series being skilled in most combat aside from magecraft.

So yeah aside from being insane he'd do pretty well and may survive the climb up depending on how many lives he's used up. Meanwhile whoever summoned him will be having a nice time relaxing in Orth.

As a somewhat silly suggestion I think it'd be pretty funny to see Sakamoto from Havent you heard I'm sakamoto. Watching him coast through the layers as the dominoes fall perfectly for him and carnage rains down all around him would be entertaining.

If he went up in the elevator he'd have the fortune of turning into himself but maybe more handsome.

Fan service and its appropriateness
2