Wow, I didn't know that.

Is it specifically that scooter sequence he worked on, or just generally? The scooter scene would be pretty apt, what with how much of a flight of fancy it is!

I can see how his loose animation style fits the film, though.

Moderator
Looking at it more closely, I see the scooter scene is just tagged as 'presumed', which I'm guessing means they're not 100% sure it was Yuasa, but he is listed as a key animator on the film, and it certainly does look like something he'd have worked on.

Started off prepated to hate it, but just took me 24 minutes to fall in love with the new Fruits Basket. It might even be better than the original....
D

Demelza said:
I think for me it comes down to the fact I'm more of a book person than an anime person, too. I mean don't get me wrong, I love anime, but books are on a whole other level and I'm always eager to continue reading something or other so don't like burning all my free time for an evening on anime.
Click to expand...

This is the beauty of books. You can pick them up and read ten words or ten pages if you want. You're in control and can dictate the pace, depending on how you feel at the time

~AyaMachi~ said:
This is the beauty of books. You can pick them up and read ten words or ten pages if you want. You're in control and can dictate the pace, depending on how you feel at the time

True! Until you pick them up for a quick five minutes and then don't put them back down until the end.
D

Because yes, it was a perfectly logical decision to ruin my normally perfect sleep schedule by staying up an extra three hours to finish reading that book. And I totally won't regret it in the morning or anything. "Dem! Are you planning to sleep tonight?!"

Arveene said:
Because yes, it was a perfectly logical decision to ruin my normally perfect sleep schedule by staying up an extra three hours to finish reading that book. And I totally won't regret it in the morning or anything.
Click to expand...

Of course! Clearly we were just at the staple do or die moment and have to see it through to the end! Ahhh too many volumes of Is It Wrong to Try to Pick Up Girls in a Dungeon? have kept me up long after I'm meant to be asleep. I only slightly have regrets the next morning. Slightly.

I don't read books anymore, I read for years and years and just got tired of it. I prefer to be spoon-fed my images via video in my old age now, lol. But I still get plenty of speed-reading practice in by watching all my anime in Japanese language with subtitles.

Manga and Graphic Novels are my level of reading nowadays. Can't remember the last book I read.
If an interesting topic pops up in something I watch then I'll have a read of the Wikipedia entry for it. For example the Mongol Invasion of Japan in the show last year (and the upcoming game Ghost of Tsushima).
D

Lambadelta said:
If it doesn't sell, and the company put alot of money into it. That can lead to eventual bankruptcy. Studios dont' make much/if any profit from shows they are contracted to make so when they do their own original production it can either make them alot of money freeing them up to make more original productions, or become a big massive amount of red ink on their finances. SamFlam is mostly the latter. The were other issues with the studio, but SamFlam really didn't help their situation out.
Click to expand...

WMD said:
Fair. It's a real shame though. Even if it's not a huge a success I kinda don't want to see studios getting punished for being brave and pushing the boat out on something original. Guess it's the way it goes though.
Click to expand...

I think this is arguably the case with art in general. When I was studying in uni, we were often reminded of how the visual communication side of things (illustration; animation; games design; graphic design etc...), were the much more "commercialy viable" paths to take - you won't often get to choose what you want to do project wise, (and you may often end up "selling out" as it were since you're at the mercy of what the client wants), but, it's where the money is. This is the market of mass production, and where trends change at the snap of a finger, so those artists willing to adapt and go with the flow tend to stay afloat, even in an already overly-saturated industry. I think as well in this day and age, things are pretty ephemeral - it's here today and gone tomorrow, so things are designed to be throwaway. They just seem to be spewed out onto a conveyor belt to satisfy consumer demand, and then it's forgotten about the very next day.

Fine art is a much more personal and subjective thing, and how it's received depends on the personal tastes of the individuals who are observing it, which is why individual pieces command such a high asking price - it's unique, there won't be another exactly like it, and it's taken a good deal of time to produce. Self indulgence does come at a price, though - a piece that's personal to the artist may not necessarily resonate with an outsider. I agree with @WMD though - it's always great to see artists willing to take a gamble and produce something original.

Apologies as it might seem a little bit off topic, but as an artist (and I do use the term very loosely), it just really got me thinking about these things. These are of course, only based on my opinions and observations, as well as some things I've read here and there. 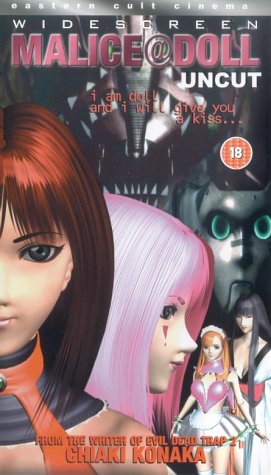 What's so bonkers about this is that it was directed by Keitarou Motonaga (Digimon Adventure Tri, Katanagatari) and written by Chiaki Konaka (Digimon Tamers, Serial Experiments Lain). Like, that's insane.

A hidden gem ... or maybe both gents just wanted it to stay hidden

Stiivun said:
A hidden gem ... or maybe both gents just wanted it to stay hidden
Click to expand...

Literally looks like a PlayStation pre-rendered deleted scene from something like Final Fantasy or anything Atlus or Grasshopper made back then.

AUKN Staff
Curiously the CeX in Tottenhan Court Road in Central London (situated next to a Scientology building and a KFC) used to have straight up pornographic content (some did have BBFC logos so assumed legal) situated on a shelf in the basement above the rest of the DVDs.