For people who like comics that aren't just from Japan

This should be a catch-all thread for all comics discussion from places that aren't Japan.

Potential Topics:
This thread seemed like a glaring omission from the Media Discussion section of the forum. A couple of really old threads covered the subject to some degree but are long dead and forgotten so it felt like a good time to start a new one.

Guess I'll try to kickstart this thread. I've been reading Comics for pretty much the first time in my life. Reading has never been a hobby of mine, I can count the amount of fictional proper books I've read on one hand and still have a finger to spare, it's pretty bad. But over the last few years I've started to get into this past time and in the last few months it's really taken ahold of me which is fun and exciting.

I never tried reading comics before recently because I don't particularly care for superheroes too much. I like the MCU, Nolan Batman Trilogy and a few Marvel Cartoons. Thats pretty much it and since Comics is so over saturated by the traditional Marvel/DC heroes on it's surface I never really attempted to dig deeper.

But with the recent surge in popularity over the last decade of one of my absolute favourite films 'The Dark Crystal' and the Graphic Novels that started to expand on that universe I just couldn't resist trying out this form of media once again that I've wanted to be into but could never make it work. Well I bought the 'Creation Myths' and enjoyed them but left it at that. Then thanks to TellTale Games and their fantastic stories set in the worlds of 'The Walking Dead' and 'Fables' I found myself reading abit more and enjoying them. Still though wasn't totally ready to be taken in by comics but the urge was there, I wanted to get into it but still needed the right title to grab me by the neck and make me finally truly appreciate the artform.

Well about 7 months ago I think that finally happened. I tried some 1st issues of a few of the more popular current titles online (that weren't Marvel/DC Superheroes) and I eventually read literally I think 8 pages of 'Saga' and was hooked, I closed the browser and a few hours later had the first 2 Trade Paperbacks of it in my hand and read through both that evening.

Like probably a few other people 'Saga' became my gateway drug, it's a fantastically funny and charming space opera that in a few years I suspect will be the world's favourite TV show. HBO if you want your next Game of Thrones this is it. The writing of Brian K Vaughan is just incredible, he just instantly brings these likable characters to life. The relationship at the core of this series just feels so real and so much fun just from those first few pages of the literal first issue. I'm now fully upto date with 'Saga' having read the 8th and 9th volumes over the festive period. I now join so many waiting patiently for the series to return from hiatus.

I've also since gone on to read 4 of the current 5 TPB's for his other ongoing series 'Paper Girls' which I also adore right now. Makes me think maybe I should go and actually watch LOST because I've never seen more than the first episode. Hmmm maybe...

I'm definitely going to have a few shelves of Trades before the year is out. I'll have to take a picture soon of where I am now and then compare it to the end of the year haha.

So right now I'm upto date on 'Saga' and I'm reading 'Paper Girls', 'Preacher' (which I have all 9 TPBs of now) and any 'Steven Universe' comics. I'm working on buying all of the 'Fables' stuff, 'Y: The Last Man' and hope to eventually jump into 'The Walking Dead' TPB's as I have the 1st compendium but I much prefer TPB's.

Also currently have my eye on, after reading the first issues, 'I Hate Fairyland' (which is hilarious), 'Sleepless', 'Prophet', 'Lumberjanes', 'The Woods' and 'Isola'.

So yeah there is a bloated first post to this discussion thread, so what are any of you currently reading/collecting?
Last edited: 11 January 2019 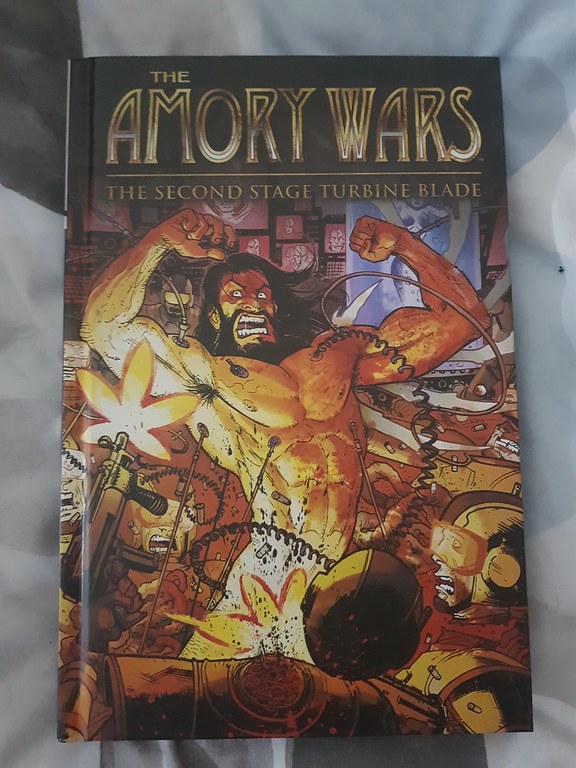 Great timing, I just so happened to buy a comic a few days ago! I'm a massive fan of the band Coheed and Cambria, but something I've never delved too deeply into was the story. All of their albums, barring one, all fit into one interconnected narrative called The Amory Wars, with the story being told through the lyrics and various interludes, sometimes with voice over and sound effects. It's hard to get a grasp on with that alone, so the band's frontman and lyricist Claudio Sanchez started comic book adaptations of the albums, starting off with their debut, The Second Stage Turbine Blade. By all accounts, these comics aren't anything to write home about from either an art or writing perspective, however I think as a fan of the music I'll get something out of it more than the average comic book fan. Ran me £17 for this hardback which collects all 10 issues of SSTB and includes a bonus short story too. Not a bad price, especially when you get used to buying manga

I don't often wonder into the non anime sections around here but this is a new home to me. I've been a Comic book fan now for nearly a decade. I mostly read cape comics such as DC & Marvel. I also read Vertigo (RIP you magnificent bastards) and whatever grabs my fancy.

True story I recently finished up the 10th anniversary omnibus of Final Crisis while I was recuperating from a cold and the damn thing in it's proper order gave me a full on fever dream. But it was a hell of a ride as well.