Picked this back up to finish, still not really doing anything for me but I understand the final episodes are good.

Isekai Cheat Magician episode 12 (complete)
I thought this was just a really generic isekai series that didn't do anything different but was okay to turn your brain off with. It left me a bit disappointed in the end though so 5/10 for me.

How Heavy Are the Dumbbells You Lift? (English Dub) Episode 11

Granbelm Episode 13 (Complete)
A fitting conclusion. (For an anime original, this was a very good one. With an intriguing story plot, good looking animation and having a very interesting cast of characters made this into a worthwhile watch. Plus the fights are very good.) 3.5/5

Magical Girl Lyrical NANOHA the Movie 2nd A's
(This was a decent retelling of MGLN A's. As with the first film, the action scenes and magical fights visually still look good even with the improved and new animation scenes. Overall this was quite enjoyable.) 3/5

The Demon Girl Next Door Episode 12 (Complete)
Secrets and Truths. (The was a fun and light hearted SoL comedy with a fun cast of characters, decent animation and hilarious comedy. This was a good example of an uplifting comedy that doesn`t take anything to seriously. Overall it was a comfy and relaxing watch.) 3/5

It was pretty good, my favorite this season. Would love a 2nd season for this one. 7/10

Fate/Apocrypha ep 19
That Time I Got Reincarnated as a Slime ep 18
Last edited: 27 September 2019

AUKN Staff
The Demon Girl Next Door episode 12 Yeet! (Complete. A very fun and easygoing series that I wasn’t expecting much from but found to be solid overall.) 3.5/5

Legend of the Galactic Heroes episodes 85-92

Demon Slayer episodes 22-25
I put this on hold because I felt like it was dragging things out, but it was a lot more enjoyable leaving it to build up like this. Waiting an entire week between each episode did my head but I should be able to finish it off tomorrow now.

Granbelm episode 13 [End]
Despite some story pacing and rule issues this has become one of my favourites this season. Character writing was so good and episode 12 is likely to be my episode of the season. Really surprised with this one. 8/10

Guessed the Cinderella before the reveal, but I didn't see the reveal at the end as she already had a perversion of being a bro-con, but they gave her a second one for good measure. I did find the backstory as to why she liked the MC quite sweet though.
Overall the characters were either annoying or didn't have enough screen time to decide, although some of it was amusing.
The art was quite nice and the animation was fine.
6/10

GRANBELM ep 13 (complete)
My interpretation of the last scene was
that the transfer student was Mangetsu.

Shingetsu also talks about how when a child thinks and acts on their own "it gives rise to [their] own free will". So whilst Mangetsu was born from Shingetsu's desires, she became her own person.

She also talks about Magiacontus telling her that Mangetsu wasn't a doll, but a friend. It was her last test, which I believe she failed and thus used the magic to recreate Mangetsu.

The lead up to that part was a bit of a red herring with nobody interacting with her after Suishou's warning that she would fade herself without magic in the world and I swear Nene was taller ie magic was no longer affecting her growth.
Overall the action side of the show was a bit too intense sometimes, making it hard to work out what was going on and the mech designs looked a bit odd, too short and too broad. But the psychological side of the story kept me invested right to end.
8/10

Midnight Occult Civil Servants OVA (eps 14-15, seems 13 came with the manga, but not made available for Crunchyroll)
Really interesting case, probably better than a lot of the cases in the main show!

Tsurune Special (ep 14)
Much more fun than the series. Shame they found an excuse for the idol to not show up. There could have been even more hijinks.

Ep 13 of Legend of the Galactic Heroes: Die Neue These
Ep 13 of Dr Stone

AUKN Staff
A Certain Scientific Accelerator episode 12 (Complete. After ACMI III disappointed I was pleased to see that this was a worthwhile spin-off with some appropriately dark themes for a story focusing on someone like Accelerator.) 3.5/5

Dr. STONE episode 13 She (un)blinded me with Science!

Granbelm episode 13 A firm decision (Complete. An unexpected standout for this season which featured some sublime fights and a story that became more interesting as the developments were revealed.) 4/5

Is it Wrong to Pick Up Girls in a Dungeon? II episode 12 Goodbyes and tears. (Complete. A solid follow up to the first season that delved into darker territory with its storytelling and themes, though the early episodes felt a bit rushed in parts.) 3.5/5

Rambo III (Film) A pure action-fest and very over-the-top fun. It was neat seeing Rambo finally fight alongside Trautman after two flicks too. 3.5/5

This manga is a dud in the Toaru universe for me, but they did a good job with it. 5/10

Finally introducing a capable opponent for Kato in the form of a shrewd young shrine maiden, this instalment is easily the most successful so far and, with a bit of further development, could potentially have formed the basis of a stand-alone film in its own right. I know there was a very successful live-action film based on the same source material released a few years prior to this series, so if it's available in English, I'd be interest to see how that compares.

Is It Wrong to Try to Pick Up Girls in a Dungeon? II (English Dub) Episode 9

A Certain Scientific Accelerator Episode 12 (Complete)
(Following on from the disappointment that was ACMI III, this was a worthwhile spin-off series with it's rather appropriately darker scenario for a story with Accelerator as its main focus.) 3.5/5

Do You Love Your Mom and Her Two-Hit Multi-Target Attacks? Episode 12 (Complete)
Fake Mother's abound. (A ridiculously fun and surprisingly entertaining series that I really wasn't expecting to much from but in the end though this was quite a decent show.) 3/5

Is It Wrong to Try to Pick Up Girls in a Dungeon? II Episode 12 (Complete)
Weeping farewells. (A solid second season that continues on from where the first season left off, but this time dives right into some darker and rather mature themes this time around. Can't wait for season 3.) 3.5/5

The Demon Girl Next Door episode 12 [End]
Another hit from Manga Time Kirara. Definitely one of the best comedies to come from the magazine with a good balance between the that and and the more serious moments. 8/10

The Demon Girl Next Door episode 12 (complete)
I enjoyed this series a lot more than I expected to. A good comedy and one of the best of the season for me personally (also I want that cat). 8/10

Do You Love Your Mom and Her Two-hit Multi-target Attacks? episode 12 (complete)
A fun series and I liked the overall concept, but you basically got what you expected going in so it was okay and had some funny bits. 7/10

Is It Wrong Try to Pickup Girls in a Dungeon?? II episode 12 (complete)
This was disappointing for me. I really liked the first season and maybe I went in to it expecting too much I don't know. It was just a bit average I think. 6/10

A Certain Scientific Accelerator episode 12 (complete)
This one really was a let down I thought. I didn't really expect much anyway after Index III so honestly didn't expect much but somehow managed to get less. It was really hit-and-miss as well and for some reason I always found my mind wandering with this series and I'd stop paying attention as it was a bit boring. 5/10 for me.

Adam-M said:
The Demon Girl Next Door episode 12 (complete)
I enjoyed this series a lot more than I expected to. A good comedy and one of the best of the season for me personally (also I want that cat). 8/10
Click to expand... 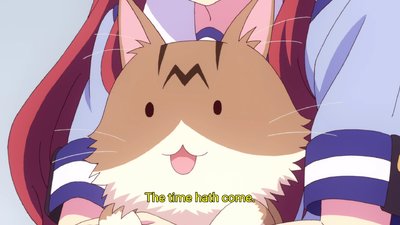 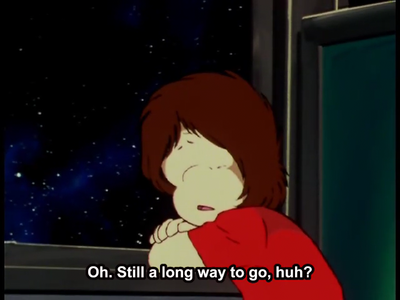 It's as a thought-provoking travelogue that GE999 is at its best (it's a bit like Kino's Journey for kids to destroy the hopes and dreams of children) and on that front, this batch of episodes is actually pretty good. We've got fracking world, which sees an old mercenary return to his beloved home planet to find it's been ecologically devastated, who ultimately comes to the conclusion that Tetsuro was better off hating his home planet, because at least he can never be heartbroken over what happens to it. Cheery.

We have cannibal world, where the morality of cannibalism is examined much more reasonably than the subject probably warrants. It's interesting but no longer surprising that Maetel seems more well disposed towards cannibals (whom she even discovers in the act of cooking Tetsuro in an oven) than she has been towards other far less morally repellent people. We travel to ghost world, where the spirits of the dead hang around the remains of their destroyed planet trying to possess people so they can live out the dreams that were cut short in life: 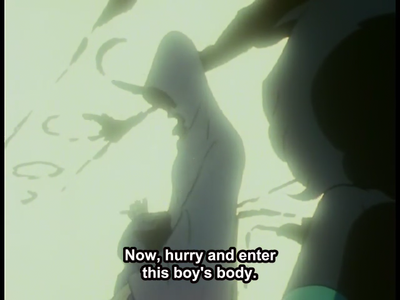 You gotta pay the troll toll.

And then we've got episodes like Tarzan world (which I honestly zoned out during) gold-plated world (where everything is gold plated and non-gold plated people are discriminated against in a rather unnecessarily convoluted metaphor for racism) and the Planet of Screws, where they make screws and everything's made of screws. What adventures does Tetsuro get up to on the Planet of Screws, you ask? Well: 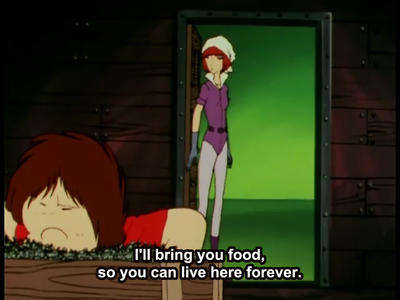 For ****'s sake. However, the same plot device being used for what feels like about the 20th time doesn't actually detract so much from this one, which is quite clever on several levels, with the machine-like world making allusions to Tetsuro's feelings regarding obtaining a machine body and even hints at things to come: 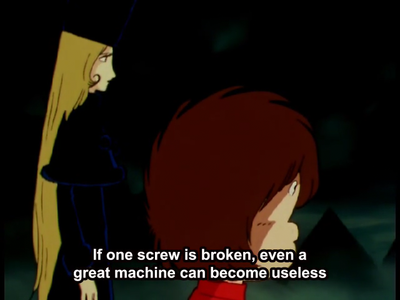 But this is GE999, and it can't resist the urge to leave things on a bleak note. For making the unique screw that allows the 999 to continue on its journey, what does poor Spiral, the indebted machine-woman stuck making the same screws all day every day for ever (because she's now immortal) receive? A pass to ride the train? A couple of those bags of gold the passengers inexplicably receive for travel expenses (which seem to have been forgotten about recently) to pay off her debts? Nope, she gets a sense of satisfaction in her work so she can carry on making screws for eternity. The ride, truly, never ends.
Share:
Facebook Twitter Reddit Pinterest Tumblr WhatsApp Email Share Link
Top