Moderator
Thinking about coming off my Netflix subscription for a while, so trying to finish / check out as much as possible from there first.

As it's a CG anime based on a mobile phone game, my expectations for this were extremely low, but it's a surprisingly enjoyable bit of spy-fi hockum that is probably one of the nicest looking cel-shaded series I've yet seen. It does scream 'PHONE GAME' at regular intervals and it's hard not see the mc as a chuuni wish-fulfilment fantasy (he even wears a single black glove because the power of his magic hand is TOO STRONG), but in the main, I quite like it.

Still slightly torn on this one. I think it's clever and fresh, but the main character is such a cringe-inducing ball of awkward social interactions that she reminds me too much of me I find her a bit grating. Great ED though.
N

"Medical Mechanica plans to capture that monster using this mochi, but I don't think it's possible. And the flower pot is missing."
— FLCL Progressive, episode 6

The worrying thing is that that piece of dialogue actually makes sense in context! 😂

These two follow-ups to the original FLCL from 19 years ago are very different from each other, and it feels like it stems from their writing methodologies. Progressive feels like something written by a focus group as they brainstormed the minutiae of the FLCL "formula" and wrote a story according to that template. Alternative, by contrast, comes off as the brainchild of an ordinary fan of the original who's turning their hand to writing something inspired by the FLCL universe. It could almost have begun life as a doujinshi.

I like both series, but, on first watch of each, I liked Alternative that little bit more, even though it didn't "do" as much story-wise. Perhaps on repeat viewings, though, the more ambitious Progressive might overtake its sibling. I'd love to find out one way or the other, and, to that end, a nice UK Blu-ray release would be just the ticket. 😉


EDIT: And yet I now see that both were in fact written by the same person, Hideto Iwai. 😯
That's diversity in writing ability on show there.
Last edited: 24 September 2019

Cop Craft eps 9.5 & 10/11
Nice concise retelling of the first arc (2.5 episodes) and then back to the mayoral candidate case. Some interesting detective stuff, but the action has suffered badly.

How Heavy Are the Dumbbells You Lift? eps 11-12
New Years and another beach trip. The bit with the guys "dying" in the boat was a bit weird!
Another fun and informative edutainment show. The characters were all fun to watch as well.
And as with all the Doga Kobo I've seen the art and animation were very good, along with the OP/ED.
"SAIDO CHESTO!" 8/10 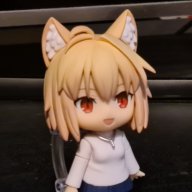 This was was ok, I would give it a 7/10 and got some chuckles. I would check out Season 2 but um... (stares at Funimation and it's anime strangle hold) might not be anytime soon.

Magical Girl Lyrical NANOHA Episode 1-13 (Complete)
(A pretty decent series which at times reminded me of CCS. While this show starts off predicatably, it turns out being quite different from a typical magical girl series. The enemy has a deeper side to them and they aren't just the usual maniacal monster hell bent on destroying the world. In the end, this is just a sci-fantasy series that contains a very good combination of well developed characters, interesting situations and impressive magical fights. Overall this was quite enjoyable.) 3/5

YU-NO: A Girl Who Chants Love at the Bound of this World Episode 25
A solid episode. It's going to be intriguing to see how this all ends.

Legend of the Galactic Heroes episodes 72-76

Purists will no doubt roll their eyes, but I think this is slightly easier to follow in its dubbed version. There is something to it though. At its best, it's stark and moody with an ever-present sense of mounting dread, but it can be draggy and downright baffling too. If nothing else, I at least want to know how it's all going to end.

Been giving My Hero Academia a rewatch before getting into season 3. So far watched season 1 and the first few of s2. This show is so easy and fun to watch. And its message of hope and believing in oneself is so uplifting. Plus Ultra!

Really dig the romance parts on this, both girls are very cute and likable. The babies are annoying aside from the MC brother tho 5/10

Isekai Cheat Magician Episode 12 (Complete)
(A good but rather generically cliche isekai series with its story plot and OP MC's. On the other hand, at least it tried to be different. In the end though this was pretty disappointing. At least the animation was decent.) 3/5

Magical Girl Lyrical NANOHA A's Episode 1-13 (Complete)
(A very good second season. Having enjoyed the first season of Nanoha, I immediately set to watching this sequel. In many ways, A's outshines the original as a lot of the peeves I had from that show are non-existent now. The story in the original was good and A's takes it to a new level and there is no comparison. The action picks up from basically the first minute and doesn’t stop. A world of magic is further expanded on as a story that puts you through all the emotions and has a number of shocking surprises that you won’t see coming. Visually, A's looks good with the improved animation and the fights are exciting, explosive, and on a much grander scale than anything from before.

Nanoha and Fate return as the same bubbly characters from the first series. There role with the Space-Time Administration Bureau expands more and we get to know Lindy, Amy, and Chrono better as well as some new characters within the agency. It was disappointing though that several characters from the original series were left out a bit as we see very little of Yuuno, Arf, Arisa, and Suzuka. There is however a plethora of new characters and my opinion of them is mixed. They are interesting, have complex motivations for doing what they do. The main problem is that now there are so many new characters that the cast just becomes so large that it’s impossible to really get to know any of them that well. As with the first, this season was also enjoyable. 3.5/5

Magical Girl Lyrical NANOHA The Movie 1st
(This was a decent film and quite the impressive first season retelling. Nonetheless, the pacing is good, keeping my interested throughout the unusually long 130-minute run time. The music is also good, leaning toward an orchestral, cinematic style, and even the couple of English-language characters buck the general anime trend by being fairly passable actors. On a positive note the animation is much improved which made the action scenes and magical fight better. Overall the was very enjoyable.) 3/5