Lu Over the Wall Theatrical Review

This year the UK has been fortunate to receive a number of theatrical anime releases. It’s safe to say we’ve been spoilt for choice. With a December release planned for Lu Over the Wall, I was expecting to have to give it a miss due to finances. However, I’ve been lucky enough to see the film early thanks to a special screening at the Leeds International Film Festival’s Animation Day. So just how does the movie hold up?

Our story follows middle schooler Kai, who lives in Hinashi Town, a remote fishing village. Kai is a quiet and reserved guy whose only real joy is uploading music he composes to the internet. One day his friends Kunio and Yuuho invite him to join their band “SEIREN” after stumbling upon one of Kai’s videos. At first Kai refuses, but after his music brings him a chance encounter with a music- loving mermaid known as Lu, he quickly changes his mind… 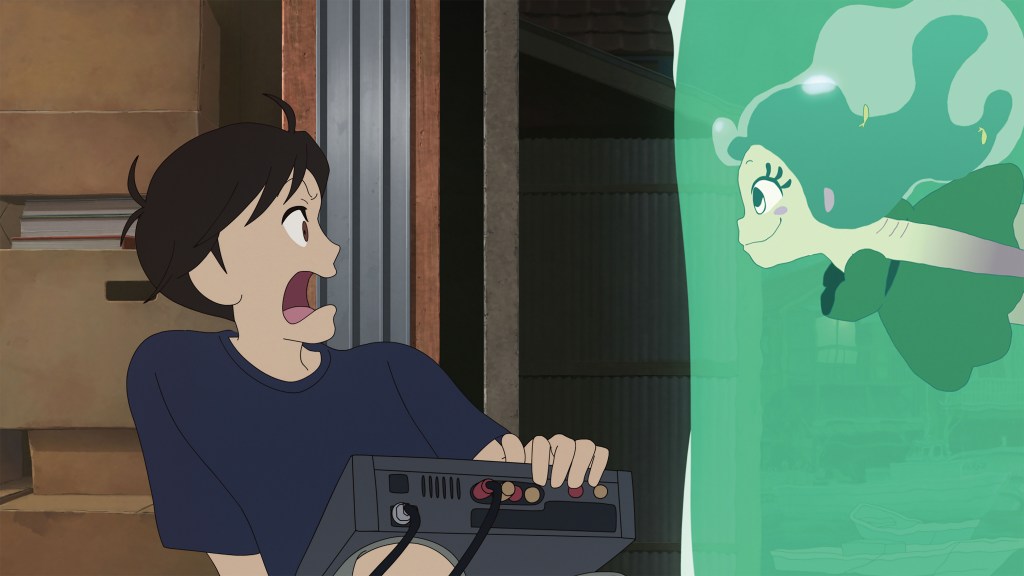 Since ancient times, the people of Hinashi Town have thought that mermaids bring disaster. They’re rumoured to come out when the sun goes down and are attracted to music, so Kai is warned by his grandfather (whose mother was killed by a mermaid long ago) not to play music near open water. However, after meeting Lu, Kai is convinced that there is nothing to fear about mermaids and, alongside his friends, sets out to prove this to the town.

Lu Over the Wall starts off with a solid base for its story and builds on it all the way through to the satisfying conclusion. The movie is a coming-of-age story for Kai and overall is a fantastic, family-friendly, magical adventure that will capture your heart. It has something for everyone: older viewers will be enthralled by the character development and messages of using music to convey feelings, while younger viewers will fall in love with Lu and her childish antics. Director Masaaki Yuasa has truly created something quite wonderful here. 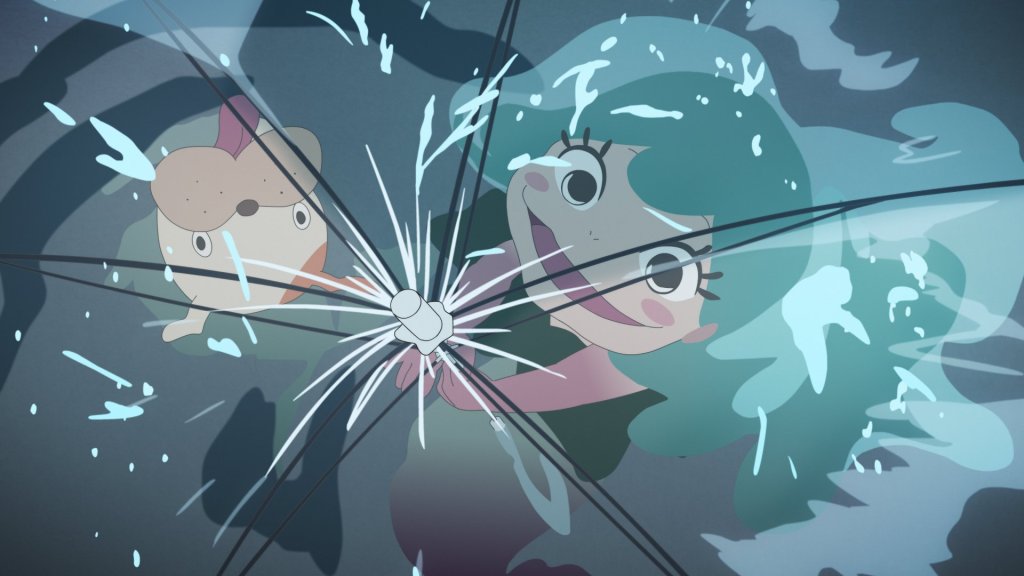 The characters are pretty typical of children their age. Kai is a shy person who struggles with his feelings and his love for music – a hobby he gets from his mother, whom he hasn’t spoken to since his parents divorced. Kai starts off a bit two-dimensional in tone but he receives a lot of character development thanks to his interactions with Lu. On the other hand, Yuuho is bubbly and desires to take centre stage and be on everyone’s mind, but as the movie goes on, we also see that she has struggles with self-confidence.

As far as the cast goes, only Kunio and Lu never really receive any meaningful development. In Lu’s case this is largely because she’s very much a ‘kid’ character and seems to have a mental age of about 6 or 7. She only wants to become friends with the people in Hinashi Town and nothing else crosses her mind, except for how much she enjoys spending time with Kai. Then we have Kunio, who suffers from being a bit of an optimistic fool who doesn’t have a care in the world. Because he’s never faced with any conflicts, we never get the chance to see him develop. However, in Kunio and Lu’s case this is actually okay. They’re both good characters in their own right and drive the story well in the places they need to. 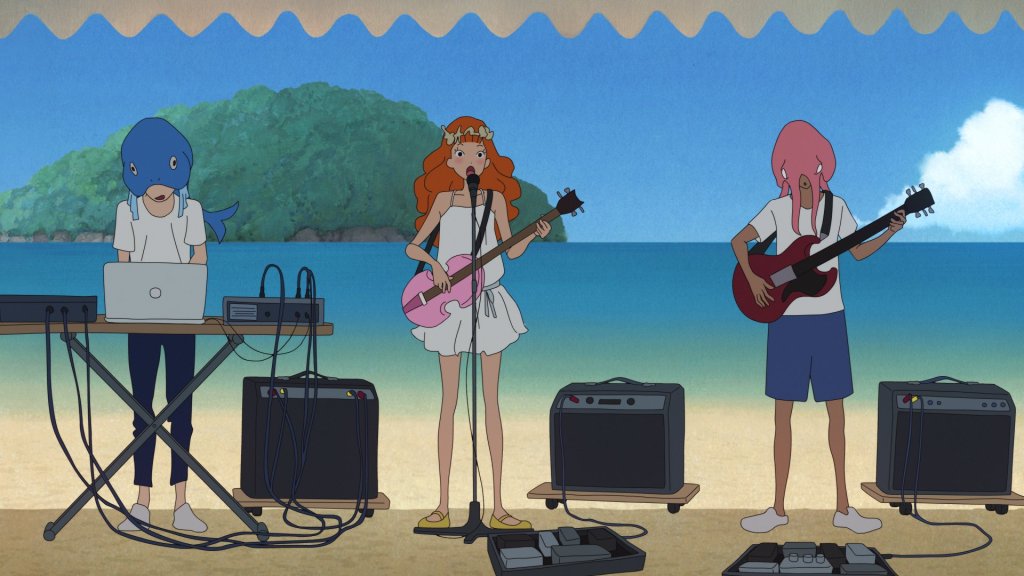 Unlike director Masaaki Yuasa’s other recent work (Night is Short, Walk on Girl) Lu Over the Wall is an original piece. The nice thing about it being original is that it doesn’t suffer from being too long – a slight issue that I had with Night is Short. Lu Over the Wall is well paced and never dips in the middle like many anime films tend to. Despite the two hour runtime, the movie managed to keep me engaged all the way through – and that’s not something I can often say for something so long. It shows Yuasa’s talents when he’s working on a project without a source and makes me excited to see what he puts out next.

In terms of animation, Lu Over the Wall is handled by Science SARU and uses a similar visual style to Tatami Galaxy and Night is Short. Scenes are bright and vibrant with wonderful uses of green and blue shades for the water surrounding Hinashi Town. While the animation style doesn’t quite deliver what you’d expect from Japanese animation (it’s almost a blend between Japanese and some of Disney’s works), that works in the film’s favour and leaves it with a memorable look. 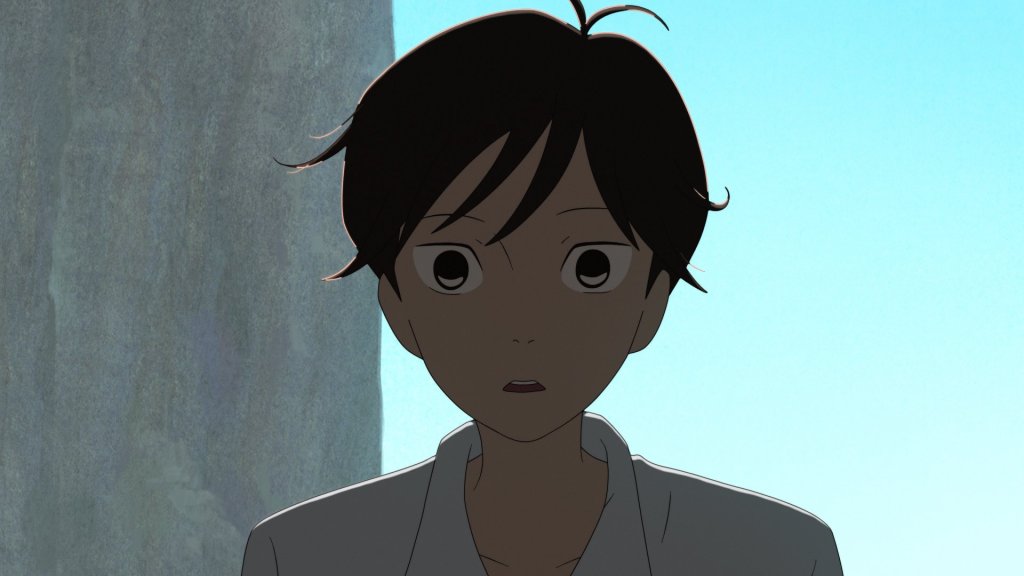 Where music is concerned, we’re treated to a fantastic soundtrack from Takatsugu Muramatsu (who also composed for When Marnie Was There and the upcoming film, Mary and the Witch’s Flower). The tracks used are very electronic and pop as this is the kind of music Kai composes. Within the context of the movie it works really well and it’s a collection of songs that I’d listen to on their own too.

Interestingly, the lead roles are taken by some relatively new actors to the world of anime. Lu is played by Kanon Tani (Yotsuha Miyamizu in Your Name), and Tani being a young girl herself (13) captures the childish innocence of Lu perfectly. Her acting is wonderful and really immerses you in Lu’s world. Likewise, Shota Shimoda who plays Kai does a splendid job – especially for what appears to be his very first anime role.

Lu Over the Wall comes to UK cinemas in December thanks to Anime Limited and is being shown in Japanese with English subtitles.

Overall, Lu Over the Wall is a tremendous film with a real family-friendly story to tell. There is a lot to like here and I’d encourage everyone to give the movie a chance. The only real shame is that once you’ve seen it, you’re unlikely to be in a rush to see it again because I feel knowing all the twists and turns will leave you satisfied and the story may seem less compelling in future viewings. However, that shouldn’t dampen the impact it’ll have on you the first time around. It’s a must-see movie showcasing the wonders of Japanese animation and director Masaaki Yuasa’s skills.

Lu Over the Wall Review

N
Anime Limited Brings Masaaki Yuasa’s ‘Lu Over the Wall’ to the UK Theatrical Screens this...