(Classroom of the Elite 3 has been delayed to next week)
Last edited: 11 November 2019

AUKN Staff
@kuuderes_shadow I think Konosuba is getting delayed, it's down for December on Yen's site and book depository have it as pre-order even with just two days to go, so I think something's up with it. :/

Otherwise I'm importing the first three volumes of Chivalry. Hopefully Sol don't get through these too fast (Ha!), because I'd rather they get distribution outside of America sorted out.
K

Demelza said:
@kuuderes_shadow I think Konosuba is getting delayed, it's down for December on Yen's site and book depository have it as pre-order even with just two days to go, so I think something's up with it. :/
Click to expand...

Yes it has been - I even went on their site and saw it under "next month" - but then thought to myself "they obviously haven't changed the month yet" without thinking to check further... My mistake
K

kuuderes_shadow said:
Physical release of Chivalry of a Failed Knight vols 1-3 has been delayed to December
Click to expand...

Got a source for that? Amazon US still says November
K

Demelza said:
Got a source for that? Amazon US still says November
Click to expand... 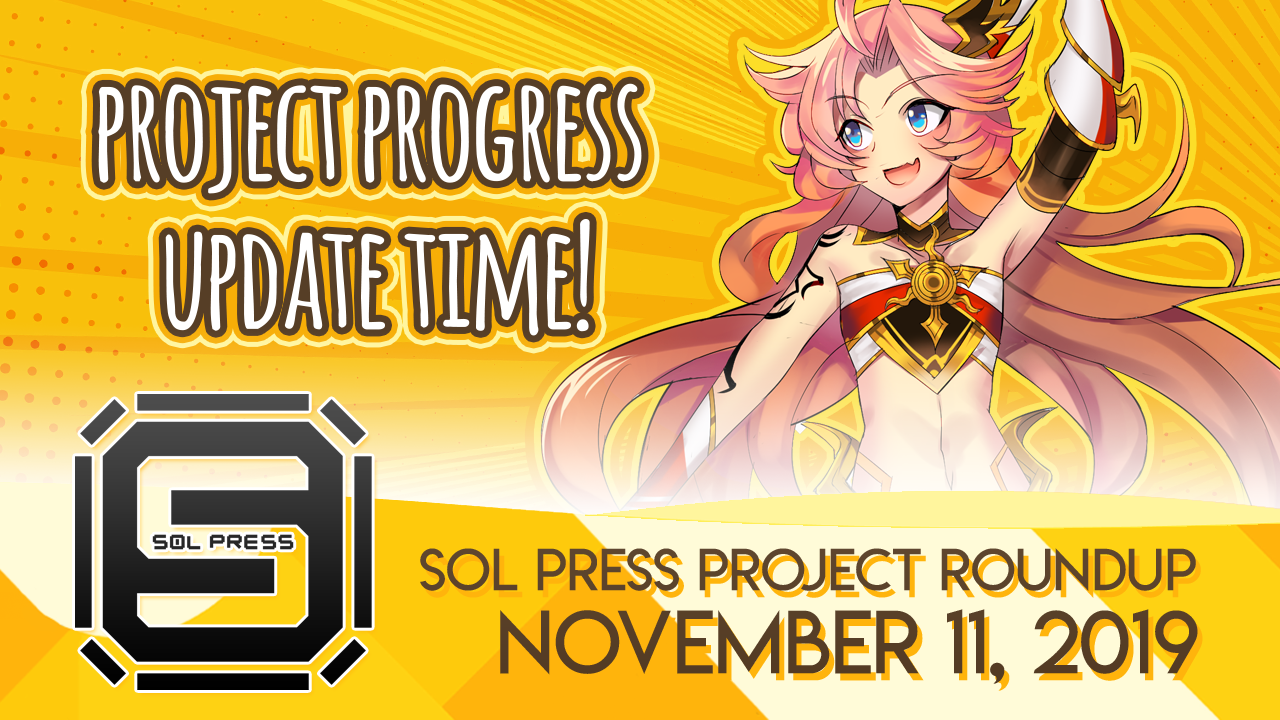 Info regarding physical copies of volumes 1-3 was miscommunicated slightly. They are not ready for release just yet, but should begin shipping in early December.
Click to expand...

Square Enix have announced that they will be releasing the third NieR:Automata novel.

The first two were released by Viz Media.
K

Banished from the Heroes' Party, I Decided to Live a Quiet Life in the Countryside / Shin no Nakama Janai to Yuusha no Party wo Oidasareta no de, Henkyou de Slow Life suru Koto ni Shimashita:

In the Land of Leadale/Leadale no Daichi ni te:

The Hitchhiker's Guide to the Isekai / Isekai Hitchhiker Guide:

The Economics of Prophecy / Yogen no Keizaigaku:

I Refuse to Be Your Enemy / Watashi wa Teki ni Narimasen!:

The White Cat's Revenge as Plotted from the Dragon King's Lap / Fukushuu wo Chikatta Shironeko wa Ryuuou no Hiza no Ue de Damin wo Musaboru: (English title not finalised)

They have also announced physical releases of Sexiled! and My Next Life as a Villainess: All Routes Lead to Doom, scheduled for 2020.
Last edited: 17 November 2019
K

This week's releases:
Arifureta: From Commonplace to World's Strongest 7 (Physical release)
WorldEnd: What do you do at the End of the World? Are you busy? Will you save us? 5
How A Realist Hero Rebuilt the Kingdom 5 (Physical release)
The Rising of the Shield Hero 15
Sexiled: My Sexist Party Leader Kicked Me Out, So I Teamed Up With a Mythical Sorceress! 2 (E-Book ONLY)
K

This week's releases:
Monogatari Series Second Season Box Set
KonoSuba: God's Blessing on This Wonderful World! 10: Gamble Scramble!
The Devil is a Part-Timer 15
Weathering With You
A Certain Magical Index 21
Accel World 20: Pull of the Dark Nebula
Restaurant to Another World 3 (Physical release)
Banner of the Stars 1 (E-Book ONLY)
Lazy Dungeon Master 8 (E-Book ONLY)
Bloom into You: Regarding Saeki Sayaka 1 (E-Book ONLY)
K

Not going to be able to get on on Sunday so doing this now.

This week's releases:
That Time I Got Reincarnated as a Slime 7
I've Been Killing Slimes for 300 Years and Maxed Out My Level 6
Konosuba: An Explosion on This Wonderful World! 1
Kingdom Hearts X: Your Keyblade, Your Story
The Genius Prince's Guide to Raising a Nation Out of Debt (Hey, How About Treason?) 2
Baccano! 12: 2002 [Side A] Bullet Garden
Toradora 8
Campfire Cooking in Another World with My Absurd Skill 4 (E-Book ONLY)
K

This week's releases:
Is It Wrong to Try to Pick Up Girls in a Dungeon? 14
Spice and Wolf 21: Spring Log IV
The Irregular at Magic High School 14: Ancient City Insurrection Arc I
Combatants Will be Dispatched! 2
The Alchemist Who Survived Now Dreams of a Quiet City Life 2
Seraph of the End: Guren Ichinose, Resurrection at Nineteen 1
Our Last Crusade or the Rise of a New World 2
Full Metal Panic! 5 (E-Book ONLY)
Outbreak Company 12 (E-Book ONLY)
There Was No Secret Evil-Fighting Organization (srsly?!), So I Made One MYSELF! 2 (E-Book ONLY)
Last edited: 29 December 2019
K

As previously, here's a list of series ordered by their rankings at the time I made the releases posts, ordered by the highest ranking volume. Each series is only listed once, but the ranking number is that volume's rank out of all volumes released this year.

As bookdepository's rankings were used, there are no ebooks in the ranking.

There were a whopping 236 volumes released, from 100 different series - 89 more volumes, and 31 more series, than last year. 2 volumes were missed at the time of release (My Hero Academia: School Briefs volumes 1 and 2) and 3 volumes were not listed on bookdepository for unknown reasons, meaning there are 231 ranked from 98 series. Sol Press volumes are not included in the rankings or the above figures as they do not sell through book depository.
All Kingdom Hearts volumes have been counted as the same series.

1 Is it Wrong to Try to Pick Up Girls in a Dungeon? 13
3 Overlord 10: The Ruler of Conspiracy
4 Konosuba: God's Blessing on This Wonderful World! 8: Axis Church vs. Eris Church
5 No Game No Life 9
7 Tsukimonogatari
8 That Time I Got Reincarnated as a Slime 5
9 So I’m a Spider, So What? 5
10 The Saga of Tanya the Evil 5: Abyssus Abyssum Invocat
11 Sword Art Online 17: Alicization Awakening
12 Re:Zero -Starting Life in Another World- 10
15 Goblin Slayer 6
16 Death March to the Parallel World Rhapsody 8
17 My Youth Romantic Comedy is Wrong as I Expected 7.5
22 86 -eighty six- 1
24 The Devil is a Part-Timer 13
26 The Rising of the Shield Hero 14
31 The Empty Box and Zeroth Maria 5
32 Spice and Wolf 21: Spring Log IV
36 Nier:Automata: Short Story Long
37 WorldEnd: What do you do at the End of the World? Are you busy? Will you save us? 3
38 Katanagatari 2
39 The Irregular at Magic High School 14: Ancient City Insurrection Arc I
42 Re:Zero Ex 3: The Love Ballad of the Sword Devil
43 Suspension: Kubitsuri High School – The Nonsense User’s Disciple
44 The Miracles of the Namiya General Store
46 Strike the Blood 13: The Roses of Tartarus
48 Arifureta: From Commonplace to World's Strongest 5
49 Is It Wrong to Try to Pick Up Girls in a Dungeon? Sword Oratoria 10
53 Durarara!! 12
54 I've Been Killing Slimes for 300 Years and Maxed Out My Level 4
55 Log Horizon 11: Krusty, Tycoon Lord
56 How A Realist Hero Rebuilt the Kingdom 3
57 Goblin Slayer Year One 2
59 Reincarnated as a Sword 1
60 Classroom of the Elite 2
61 Skeleton Knight in Another World 3
62 Grimgar of Fantasy and Ash level. 9: Here and Now, to Far, Far Away
63 Sword Art Online Progressive 6
65 In Another World With My Smartphone 5
67 Didn't I Say to Make My Abilities Average in the Next Life?! 7
69 How Not to Summon a Demon Lord 4
71 Accel World 19: Full of the Dark Nebula
72 A Certain Magical Index 20
73 If It’s for My Daughter, I’d Even Defeat a Demon Lord 4
75 Konosuba: An Explosion on This Wonderful World! 1
76 Do You Love Your Mom and Her Two-Hit Multi-Target Attacks? 3
79 Bungo Stray Dogs 2
80 Torture Princess: Fremd Torturchen 1
82 A Sister's All You Need. 5
85 Mushoku Tensei: Jobless Reincarnation 1
86 Woof Woof Story: I Told You To Turn Me Into A Pampered Pooch, Not Fenrir!
88 Magical Girl Raising Project 6: limited (II)
90 Final Fantasy XIII: Episode Zero -Promise-
95 Wolf & Parchment: New Theory Spice and Wolf 4
96 Bottom-tier Character Tomozaki 1
99 Last Round Arthurs: Scum Arthur & Heretic Merlin 1
101 Combatants Will be Dispatched! 1
102 Berserk: The Flame Dragon Knight
105 The Asterisk War 10: Conquering Dragons and Knights
112 Weathering With You
116 Ascendance of a Bookworm Part 1 vol 2
117 The Ancient Magus Bride: The Silver Yarn
118 The Alchemist Who Survived Now Dreams of a Quiet City Life 01
123 The Night is Short, Walk on Girl
126 JK Haru is a Sex Worker in Another World
133 Kingdom Hearts X: Your Keyblade, Your Story
135 5 Centimeters Per Second: One More Side
139 Masquerade and the Nameless Woman
140 Legend of the Galactic Heroes 10: Sunset
143 Division Maneuver Vol. 1 - A Hero Reincarnated
145 Sword Art Online Alternative: Gun Gale Online 5: 3rd Squad Jam: Betrayer’s Choice: Finish
149 Neon Genesis Evangelion: Anima 1
152 The Dirty Way to Destroy the Goddess's Heroes 1
159 Toradora! 6
160 The Hero is Overpowered but Overly Cautious 2
164 Last and First Idol
166 World's Strongest Rearguard: Labyrinth Country & Dungeon Seekers 1
168 Infinite Dendrogram 1
169 The Genius Prince's Guide to Raising a Nation Out of Debt (Hey, How About Treason?) 2
171 Baccano! 12: 2002 [Side A] Bullet Garden
173 Boogiepop Omnibus vols 4-6
174 Restaurant to Another World 1
175 The Magic in This Other World is Too Far Behind! 5
177 Monster Girl Doctor 5
178 You Call That Service? 1
185 An Archdemon's Dilemma: How to Love Your Elf Bride 2
187 Defeating the Demon Lord’s a Cinch (If You’ve Got a Ringer) 4
188 Wolf Children: Ame & Yuki
189 Little Witch Academia: The Nonsensical Witch and the Country of Fairies
192 Our Last Crusade or the Rise of a New World 1
193 Suppose a Kid from the Last Dungeon Boonies Moved to a Starter Town 1
194 My Hero Academia: School Briefs 3
195 Final Fantasy VII: The Kids Are Alright: A Turks Side Story
198 Seraph of the End: Guren Ichinose, Resurrection at Nineteen 1
201 Clockwork Planet 4
212 Arifureta: From Commonplace to World's Strongest Zero 1
215 The Greatest Demon Lord is Reborn as a Typical Nobody 1
217 True Tenchi Muyo Vol. 3: Washu


As before, bear in mind:
These are ordered by RANKING, not sales. The same rank will be inevitably be a different sales figure at different times of year.
New series will always do better than ones that have been going for a long time, which is why I included the volume number/name in the list.
This being done from bookdepository's rankings mean that no other retailer's sales are relevant. This is thus a relatively small sample size.
A couple of weeks of releases were done on the wrong date (specified in the relevant posts of the thread). This may have impacted the rankings.
Last edited: 29 December 2019
K

Magic User gets the ignominous distinction of getting the lowest ranking on bookdepository for a volume 1 since I started tracking them in October 2016. I guess the title doesn't exactly grab the interest of prospective readers...
K

17 October 2017
Demelza
D
N
Light Novel series How NOT to Summon a Demon Lord is coming to J-Novel Club!