Yumeko Jabami is a new student at Hyakkaou Private Academy, where the most wealthy and privileged students of Japan attend. On the surface it looks like any ordinary private school, but it’s after school and in its special clubs that the Academy reveals its true colours: an underbelly of gambling. The school hosts multiple games, and the many students who are slaves to mountains of debt are named ‘pets’, whilst the luckiest and most skilled gamblers become members of the student council. Luckily for Yumeko, she just happens to have an insatiable appetite for gambling and a large amount of cash behind her to take her all the way to student council president.

Kakegurui was originally broadcast in Japan back in Summer 2017, however Netflix withheld the series for a long time before the Western world finally saw its release in February 2018, with Anime Limited announcing its home media release for 2019. Considering how Netflix are currently simulcasting Violet Evergarden alongside the Japanese broadcast, and how they released the first season of Fate/Apocrypha much sooner, it seems weird they withheld this series for such an extended period of time. Has it been worth the wait? 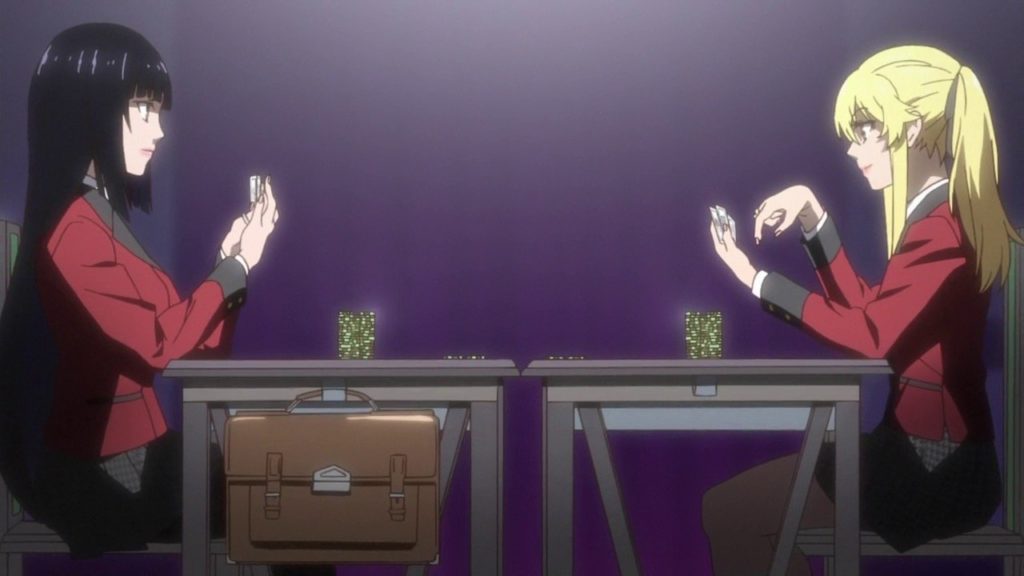 Also known as Compulsive Gambler, Kakegurui is structured in a similar way to shonen tournament-based anime, with an established game of sorts and the main character being a newcomer but naturally skilled at it. Yumeko, however, is not your typical ‘hero’; yes, she’s extremely gifted at gambling, very intelligent and has a carefree attitude that often comes with the territory, yet she’s far removed from ordinary. Many characters in the series label her ‘insane’, and she’s just that, for she’s addicted to the thrill of gambling; she’s not out for the money or pride in establishing herself in the school, she just wants to gamble and gains great pleasure in doing so. And I do mean that literally; she gets very, very excited when she puts everything on a single bet, and half the reason she’s so fascinating to watch is because she seems so detached from events whilst the characters around her collapse under the pressure. She doesn’t get much development over the course of the series, perhaps something they’re saving for Season 2, but her being a ‘cipher’ character helps paint her as this gambling goddess that the series rides on. She seems untouchable, even in the episodes where she doesn’t walk away with the jackpot and she’s certainly the most likable of the cast.

Unsurprisingly, most of the student body are horrible people – teenagers with more money than sense will have that effect – but as you observe them at their worst as they risk it all, you can’t help but want to be them in some way. Who wouldn’t want to have 50 billion yen as ‘pocket change’, or feel utterly indifferent to having to bet your life on the card hand, or be intelligent enough to figure out how someone is cheating within minutes of meeting them? There’s a cathartic nature to watching terrible characters losing bets, but also an admiration and thrill to observing how each game unravels. There’s a wide variety of gambling involved from variations of poker to luck-based roulette-style games, and each episode does a great job of making the viewer feel that every stake is one step away from total annihilation or ecstasy. As exhilarating as the episodes can get, there’s a bit too much show-don’t-tell that hits harder in some episodes than others. For example, in Episode 5, Yumeko figures out that a male poker player is manipulating another female to tell him what her cards are by the way the female places her cards on the table, hinting at what suit they are. However, the audience is never shown a cutaway of this action, in fact there’s no hint that the male and female know each other until Yumeko points it out. However, this exposure of the plan doesn’t completely fall apart as we are shown the male verbally and physically assaulting women in the previous episode, so we can believe he would stoop so low and it works for his character, even if his actions are not illustrated well on screen. 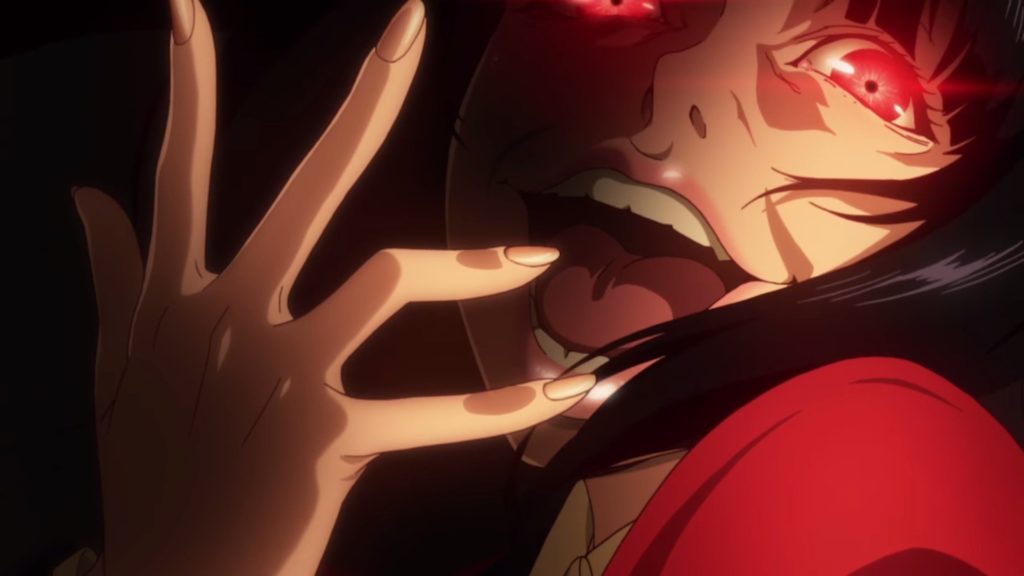 Outside of gambling, there’s another thing that the series loves to indulgence in, and that’s fanservice. Whilst it isn’t in the same league as say Queen’s Blade or Witchblade, Kakegurui just loves to have close-ups of its big-busted ladies and showcase the short skirts that are part of their uniform. There’s plenty of female-on-female titillation shots (which happens at least once an episode as it’s a prominently female cast) and Yumeko’s love for gambling is expressed rather vividly in shots where liquid imagery is used (yes, it’s exactly what you think). That’s not even mentioning the opening animation, complete with panty shots and dominant/submissive metaphors, then there’s the ending theme where the VERY FIRST SHOT is a close-up of Yumeko’s chest. It’s outlandish and ridiculous half the time, however considering the sensualized nature of the story and how it compares gambling to sex a lot of the time, it works within the context of the series, and it’s backed up by fantastic animation, which is provided by studio MAPPA. The visuals are very detailed, vivid and dynamic, with lots of stand-out shots including an Idol dance-off which features incredibly fluid animation. Considering the high pacing and stakes of each game in the show, the animation really helps the audience to be fully engaged in each game, despite how mundane some of them could have turned out. But part of its style also involves extreme close-ups of each character (not just the money shots) especially whilst they’re in the midst of a high-risk game or monologuing about their strategy. You get so close that half the time you can practically see the blood veins popping in their eyeballs, and as a result it can be incredibly uncomfortable to watch. It’s an unsubtle way of telling the audience that gambling brings out the worst in the people, but since it’s an anime drenched in the various deadliest sins (greed, pride, gluttony, etc) this works in its favour and helps give it a unique design that can easily be picked out of the crowd.

The soundtrack is heavily influenced by Jazz music, not unlike what you’d hear at a casino, so the score by TECHNOBOYS PULCRAFT GREEN-FUND does the job perfectly. The opening theme by Tia ‘Deal with the Devil’ is a high energy, utterly delightful number backed with aforementioned fanservice and incredibly fun animation. The ending theme by D-Selections ‘LAYon-the-LINE’ is a technopop number that has an incredible build up to an explosive finish, combined with a burst of colourful visuals; it’s like a mini-Las Vegas show!

Kakegurui is completely shameless in its fanservice, unsubtle handling of the negative affects of gambling, and utterly unapologetic about its ruthlessly psychotic characters and its ridiculous premise – and that’s exactly why the series is so enjoyable. It’s a wild and thrilling ride from start to finish, a perfect binge-worthy candidate and worth the extra-long wait. Now, please Netflix, don’t make us wait as long for the second season! 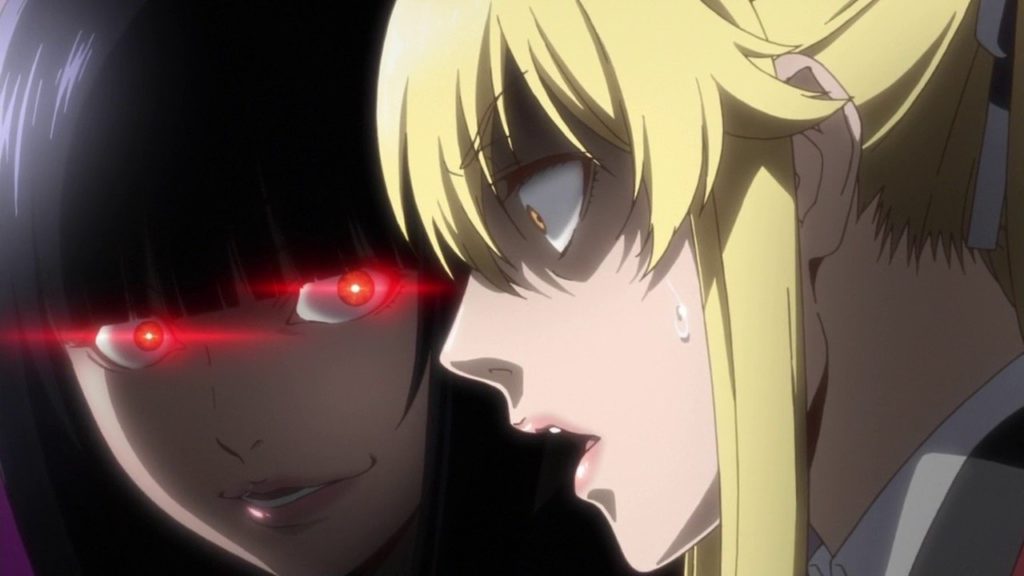 yup, it is like someone made a hentai and thought "how can we get away with this being marketed? Oh I know just photoshop the faces onto something else" it is enjoyable beyond that though, especially if you're into the main mind game part of the series (that's what much of the gambling stakes boil down to) that aspect isn't quite as good as Death Note though.
I do think that it began better then it ended though, it begins with only yumeko putting no worth in the stakes, when the entire school runs on worth, but by the end with the student council where money seems like no object, it just seems like the loser isn't losing much at all, it becomes a bit pointless. yumeko speaks in a way where a draw would leave her blue - balled and frustrated, but the last game ends in a draw and she accepts it it would be much more in character if yumeko somewhat transformed into a demon succubus and tore the student president in half, but hey that stuff doesn't happen. the stakes for that game though is leaving the school for good which seems like nothing when one girl's only pleasure in life is to have her head blown off I guess I myself feel blue balled when it goes for those kind of stakes but never makes it the end game. I guess they've kept it that way to keep a possibility for season 2.

I just want to point out though, although it's absaloutly obvious, who hasn't realised that the school uniforms look just like dealers and casino waiters?