That was a amazing episode Great twist for the last episode of the Watadamashi arc.

I think this is the first time
Mion has Hinamizawa Syndrome
The above is a Spoiler for Higurashi Kai anime, don't click if you haven't seen it, or read the VN /manga version

Hopefully they will do a answer arc for this one.

Loved the episode. So much to unpack and try to piece together. The ladder scene wasn't the best IMO, I hated it in the original, but this time around wasn't much better to be honest. That's simply not how physics work. But I must say the art style and character design don't bother me that much anymore. Perhaps because I'm so invested in the story.


Rena Ryuugu said:
I think this is the first time

I'm honestly not sure whether the old switcheroo took place or not. Unless I missed something, there's nothing that rules out that it's Shion nor anything that confirms it's Mion. My gut tells me it would be Mion. That way the killings took place by someone else, just like what happened in the first arc, where it's Rena instead of Keiichi, but that's quite meta. I'm still looking for an in universe reason.
This time around, I wasn't able to form a full working theory, so here are just some scraps/points of interest:

There were a lot of things not being shown during this episode. While annoying, this actually gives us some insights:

Other small points:
The problem with the above points is, that I'm not sure we can trust the narration of any of them. So drawing conclusions from them might be a bit tricky.

Where does that leave us? In an even larger pile of questions . What we should be doing is figuring out Rule X, Y and Z. I think it's clear that they aren't what they used to be. Rule X seems to hold, for now, while Rule Y seems to be clearly broken. I had my doubts about Rule Z, but quite possibly that one is different as well. In the first arc, it's unclear what caused Rena to go on these killings, but she seemed fully believing the curse and no tie with the Sonozaki family. In this arc, while Sh/Mion does perform the killing, she doesn't seem to hold the believe that the Sonozaki family performs them:
But I'm not sold on this concept. At the very least Ooishi still seems to find the Sonozaki family suspicious. And if Sh/Mion truly believes it's the "village" as a whole or some other party that performs the killings (or allows them), why would she kill all the family heads? What would her plan be?

Instead of taking the original Rules X, Y and Z as basis, perhaps we should focus on the constant things in these arcs:
And I still feel Rika isn't doing anything. Like, how passive can you be? Shouldn't she be worried a bit more, try some more things to prevent things from escalating? Of course, we don't know anything. Does she even retain her memories from the previous fragment, or is Hanyuu too weak? How much time does she have? Something is seriously off and I really hope there's some very good reasoning behind this.

So I decided to work on the assumption that there is a very good reasoning behind this. Let's say Rika does her absolute best to get to an happy end (without involving her friends...?). What would her first priority be, eliminating the risk that is Takano. Now let's say that Rika takes initiative and on the night of the festival, after her dance, she takes care of Takano and Tomitake.

Could it be that the killer of each arc is somehow triggered by such an event? We know Rena seems to look at the pair from behind the trees. She could've followed them, see them meet/encounter Rika. Go paranoid and decide to complete the curse herself. Shion could've followed the two after visiting the tool shed and have seen a similar scene. Concludes that Rika is out to kill people (and obviously also Keiichi since he visited the tool shed as well).

Problems with this theory:
Well, plenty to mull over, but sadly little to go one.
Last edited: 20 November 2020

I just caught up, it was a good episode though I'm just going to copy paste my theory from the 07 discord channel


So my full theory of Watadamashi by itself (not the overall). Keichii, Shion, Tomi and Takano go into the storage shed, mess around and leave. The town later finds out one way or another (perhaps Rika told everyone at the town assembly?) and Mion who was now infatuated with Keichii succumbs to hinamizawa syndrome and vows to protect him. She off's Kimiyoshi and Oryuu who are seeking to punish him. She also kills Shion who either knows too much or out of rage for putting him in danger in the first place.

Rika is killed unknowingly, it might be Mion or it might be part of the overarching plot. The mountain dogs who are investigating the wherabouts of Takano and Tomitake over hear Keichii scream how everything is his fault and want to find out what he knows. Mion in her paranoia comes to the conclusion that the whole town is out to get Keichii locks him up. The mountain dogs see this (there was a short frame where the mountain dogs were watching Keichii and Mion go to her house) and begin to snoop around, Mion mistakes the mountain dogs for the minions of the three families and begins her assault. A gunshot from (I suspect a third party) alerts the nearby police and things play out as we know.

Those are interesting theories you have both posted That's one of the best things about the new anime, is nobody knows the answers yet, so I'm having fun reading the theories everyone is posting.

For this arc, we know Rena survives and must have tipped off Ooishi and the police anout Keiichi.

Rena Ryuugu said:
Those are interesting theories you have both posted That's one of the best things about the new anime, is nobody knows the answers yet, so I'm having fun reading the theories everyone is posting.

For this arc, we know Rena survives and must have tipped off Ooishi and the police anout Keiichi.
Click to expand...

I agree it's very fun. After this arc I want to make a timeline of the progression of Rika rage from Higurashi to Umineko 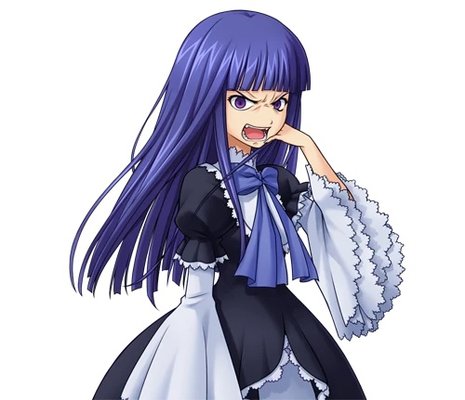 (Yes I do have a number of sprites at my disposal