GANGSTA. (which I will no longer be writing with the full stop, otherwise it makes editing capital letters all the time a chore…) started out life as a manga, written and illustrated by “Kohske” for Monthly Comic @BUNCH magazine, which is a new one on me, and is squarely aimed at the “Seinen”, or older reader market (and boy is it ever!) It spawned a spin-off manga and a series of audio dramas before finally receiving the anime adaptation treatment in 2015, all 12 episodes of which are featured on this set! 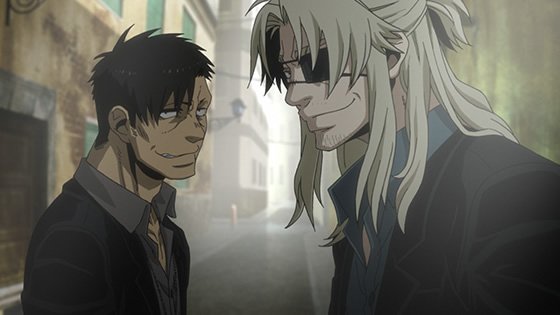 The world featured in GANGSTA is focused on the town of Ergastulum, a large town separated into several districts and absolutely full of corruption, mafia gangs, prostitution and other such illegal activities often found in seedy back alleys. Unique to this world are people known as “Twilights”, people who have inherited super abilities (normally greater strength, agility, that sort of thing. No X-Men laser powers here!) from their relatives’ use of a drug known as Celebrer that was popular during some sort of world war in the past. These inherited drug-created abilities come with a cost however, which can range from loss of one of your five senses or lack of ability for your body to age, among others, but all Twilights are destined to die in their 30s regardless. Twilights are tagged at birth and eventually given a rank based on how dangerous and powerful they are, then often sold to “normals”, and given three rules to follow that basically mean follow your master and don’t kill normal people.

This leads us to our trio of lead characters. Firstly the duo of classic laidback “cool” character Worick Arcangelo and his friend and Twilight Nicolas Brown, who is deaf as a consequence of being born with his abilities. Nic is ranked A/0 on the Twilight scale, making him extremely dangerous, and his ability to lip-read means his handicap doesn’t hold him back too much. I will say that being a big fan of the Fargo TV series, which featured in its first season a pair of assassins, one laid-back and one deaf, communicating to each other through sign language, that it was interesting to see that this manga did it first! Anyway, Worick and Nic run a “handyman” business, where they take dangerous jobs that either one of the three major mafia families or even the police won’t touch, or would rather not have on their records. The two of them also have a rather unpleasantly tragic backstory that gets told throughout the series via flashbacks that I obviously won’t go into here. 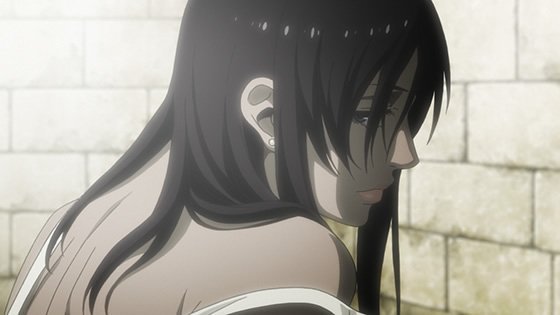 The third member of the lead cast is Alex Benedetto, a female prostitute that the two “handymen” take in after they kill her pimp and his gang during a mission. She goes through several stages of recovery from such a life throughout the series, made worse by a fictional drug that made her even more loyal to her gang but left her without certain memories and violent hallucinations when she started to come off it. She’s an interesting character to watch, and very easy to like as she becomes more and more herself around Worick and Nic. There are other recurring characters, like the police officer Chad Adkins, who seems to have a close relationship with the lead duo, Dr. Theo and his little girl assistant Nina, who are the only clinic who help out Twilights openly, and several leaders and high ranking members of the big four gangs, made up of three mafia families and a mercenaries group comprised of Twilights. It’s a strong world they set up, which makes the next paragraph all the more annoying…

Around Episode 8 we are introduced to a pair of Twilight killers, who are set up as big villains of the piece, which was good because after 7 episodes of world building it was time to play with the pieces that had been set on the board. Then, at the end of Episode 10, a possibly over-designed group of characters (does one female character really need a crazy personality, a giant axe, an eye patch and a habit of sucking on a lollypop?) arrive, complete with one character having a clear connection to Alex. This was confusing because it’s a 12-episode series, but I went along with it, but… yeah. Episode 12 ends with some of the group having made a move, Nic on his way to do battle with one of them, which is good because otherwise he hadn’t done anything in a while, Worick in potential danger… and that’s it. That’s how it ends. You’d swear that this was just Part 1 and Part 2 was going to be released soon, but nope! It’s been a couple of years and no new series has been announced, so it looks like you’ll have to start investing in the manga volumes to get the rest of the story. It’s odd, most of the time when studios adapt a manga they make sure the TV adaptation gets to the end of an arc so as not to leave too many unanswered questions, even if that means creating their own ending. This is a straight up adaptation until they ran out of episode time. Not very satisfying! 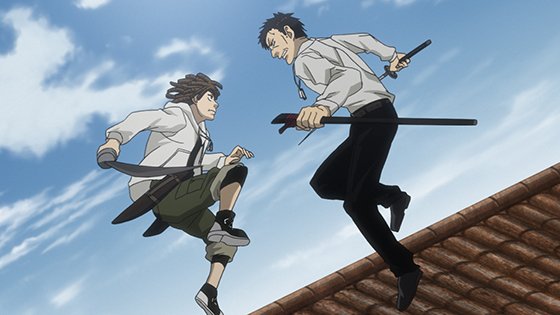 It has to be noted that GANGSTA was the last production by Manglobe before they went under due to bankruptcy. The company had previously done such work as Samurai Champloo, Ergo Proxy and Deadman Wonderland. Now they’re the animation company, so that wasn’t the reason the series feels like it was cut short, they were commissioned to do 12 and the writers wrote 12, but this might go some way to explain why some of the animation towards the end is a little rough.

Speaking of which, the visuals look good, the characters rarely look off, it’s just some animation is less than smooth. The background music could do with a bit of variety and a bit more … flare to it, but otherwise sounds fitting to the sort of urban gangland setting it goes for. Top marks for both language tracks for getting Nic’s voice right, and in general both language tracks get the feel right, with the English language option adding the kind of swearing this sort of production should have. 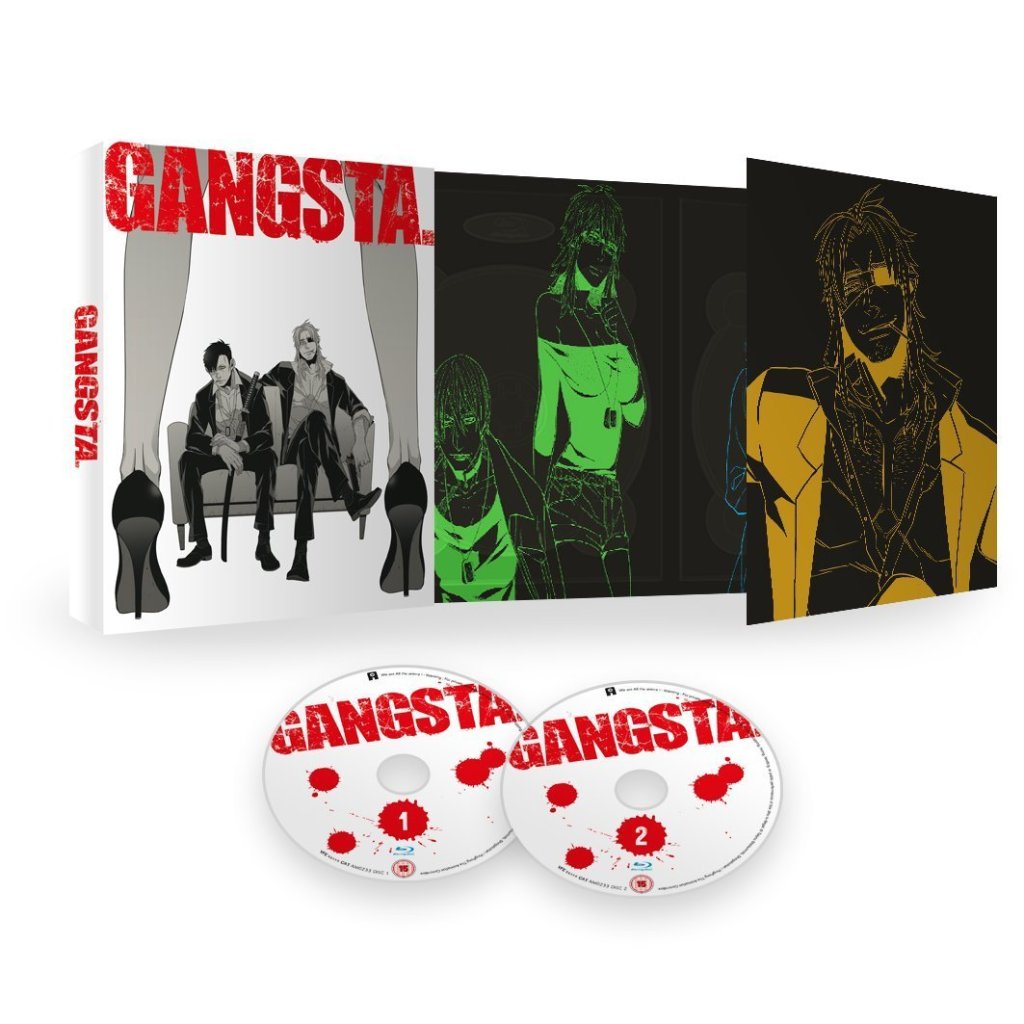 The extremely catchy intro is “Renegade” by STEREO DIVE FOUNDATION (got stuck in my head for a good few days…) while the ending is “Country of the Night” by Annabel. As for extras it has commentary from the US actors for Episode 1, “Episode 9.5” (which is just a recap of the first nine episodes that aired in Japan), promos, adverts, trailers and of course textless versions of the opening and ending. Not pictured above is a 30-page booklet that comes with the box, containing “information about various locations seen in the series, storyboards & key art, and a look at the sign language used in the series.”

So GANGSTA is a hard series to recommend straight off. It’s like a really good pilot that makes you wish it had been picked up for a full run. It sets the characters and world up really well, and even starts setting up some good antagonists and interesting storylines, it just it all ends without so much as a big final fight or resolution. It’s definitely worth watching so long as you go into it knowing you won’t get an ending; if you can deal with that, the series has a lot of merit. (Note that if you’re reading this in the future and a second series has been created that continues the story, you can bump the score below up by two, as this is a good start to a story, so long as it actually leads somewhere!)