Asteroid in Love episode 12 - End
Doga Kobo and Manga Time Kirara are a powerful combination. Good wholesome fun as expected from MTK with the bonus of a great production from Doga Kobo with good attention to light and depth. Gonna go on brand and give it a 9/10

Magica Record Season 1 - Episode 13
If I could only say this was over. I think I hate this more than AO, more than Hi Evolution.... I so hate this it relies so heavily on “nostalgia” for the original it’s not original all the wit of the original gone. Forced cameos that annoy me because it reinforces it can’t stand on own and they even get Shaft at least FGO tries to be different using different studios to etc to be original no this relies so heavily on the original classic it’s so annoy I despise it.
And the fact they can’t even think of a new evil witch as a cliffhanger insults me.
2/10 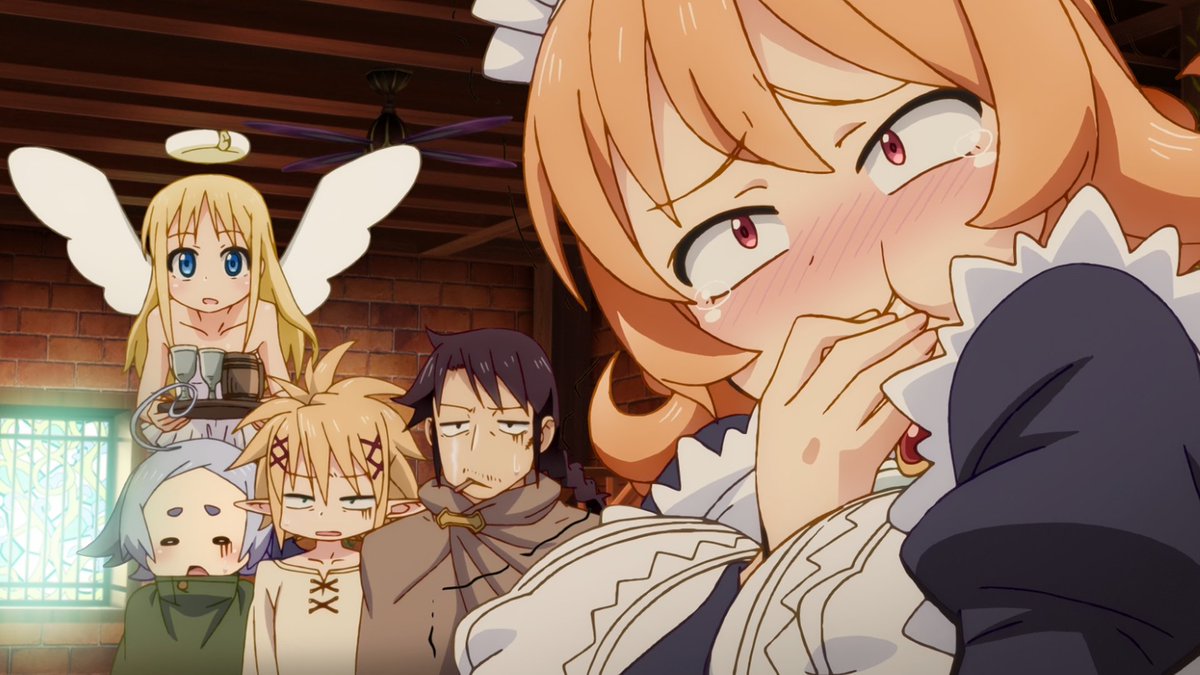 If My Favourite Pop Idol Made it to the Budokan, I Would Die episode 12 - End
Another fun series from 8Bit. The series balances a good mix of comedy and yuri with a lot of fun characters. Production was also great coming from the director of Encouragement of Climb with 2D dance scenes and background art being big highlights. I hope for a second season. 8/10

AUKN Staff
A Destructive God Sits next to Me, Bokuhaka episode 12 (Complete. After Outburst Dreamer Boys dealt with similar themes recently this felt like familiar ground but the characters weren’t quite as likeable and ended up being irritating at times. This wasn’t bad but I doubt I’d return for a rewatch.) 3/5

In/Spectre episode 12 Reasons that transcend reason. (Complete. Dialogue heavy but never boring, this was something different and entertained thanks to a tight cast of characters.) 3.5/5

Railgun T ep.9-this has been the best of the Magic, Railgun, etc. shows so far.

Star Wars Episode V: The Empire Strikes Back (Film) Arguably the strongest and best directed film of the series though VI is still my personal favourite.

Trinity Blood episodes 17-24 (Complete. A solid vampire series that sadly ends on a hinted continuation that can never be.) 3.5/5
Last edited: 5 April 2020

Unfortunately it'll never be complete as the author died.

The Saga Of Tanya The Evil-this is the 2nd time I've watched this but it's much better with the excellent english dub and video from the japanese blurays. I have watched the movie which is also great.

22/7 Episode 12 Return to the stage. (Complete. An Idol series that portrays a more serious side of the daily lives of an Idol group. The cast are a intriguing but likeable bunch, animation is decent and the performances are even better.) 3/5

A Destructive God Sits Next to Me Episode 12 Birthday surprise. (Complete. For a comedy series this was relatively average but it did get awfully repetitive and stale pretty quickly. At least the antics of the characters kept things very amusing.) 2/5

Asteroid in Love Episode 12 The dream continues. (Complete. An endearing and comfy SoL series portraying the promise of two childhood friends reunited and their wish to find and name any undiscovered asteroids.) 3.5/5

BOFURI: I Don't Want to Get Hurt, so I'll Max Out My Defense Episode 12 A 1HP Monstrous Rampage. (Complete. A solid series that was all around good dumb fun. Getting to watch maple throw out the standard MMORPG guidelines rule book each week was very entertaining. I'm definitely looking forward to watching season 2.) 3.5/5

Do You Love Your Mom and Her Two-Hit Multi-Target Attacks? OVA Beach episode.

Hatena☆Illusion Episode 11 Cliffhanger. (Complete... for now. From what I've watched and made of it so far, this has been a fun show.) 3/5

Heya Camp Episode 12 Gotta stamp em all. (Complete. Despite only being a series of short format episodes, it was still really enjoyable. Looking forward to next year with season 2.) 3/5

If My Favorite Pop Idol Made It to the Budokan, I Would Die Episode 12 Festival show time. (Complete. An interesting take on the Idol series genre from the fans pov. While it didn't do anything else different from the norm, it was still pretty decent overall.) 3/5

In/Spectre Episode 12 A satisfying conclusion. (Complete. A supernatural series with an element of Mystery thrown in combined with a darker subplot that made for some stomach-turning moments that was emphasized with the characters histories.) 3.5/5

Konosuba: God's Blessing on this Wonderful World! Legend of Crimson (Film) (Rewatch) (Complete. On revisit, this is still as hilarious as ever with it's comedy and hilarious scenario's. It was also great chance at seeing the misfit quartet upto their normal antics all over again.) 4/5

Magia Record: Puella Magi Madoka☆Magica Side Story Episode 13 An explosive cliffhanger. (Complete... for now. For a side story, this was pretty decent for the most part. It was also a nice surprise getting to see some familiar faces again. It's going to be interesting to see what Season 2 brings.) 3/5

My Hero Academia Season 4 Episode 24 Rankings and a new threat.

Nekopara: Cat's Paradise Episode 12 Beachside fun. (Complete. Regardless of the questionable background, this was a very charming and cute series with it's adorable cast of characters and relaxing atmosphere.) 3/5

Seton Academy: Join the Pack! Episode 12 The future Stone Age. (Complete. A fairly light hearted series with an interesting but fun cast of characters who gave us some pretty hilarious scenario's. The comedy was pretty decent as well.) 3/5

Somali and the Forest Spirit Episode 12 Together untill the end. (Complete. An emotional fantasy series portraying a lost human girl who's kind is detested and her unusual familial attachment with a seemingly devoid of all emotions Golem. Overall it was thoroughly enjoyable from start to finish.) 3.5/5

That Time I Got Reincarnated as a Slime OVA Episode 3 Another fun and welcome instalment into the series.

The Seven Deadly Sins: Wrath of the Gods Episode 24 Onwards and Upwards. (Complete. For the most part this was a pretty decent season for what it's worth, but it did suffer from production issues which didn't help thanks to the change in studio. I'm hoping the next season is better.) 2.5/5

Toilet Bound Hanako-kun Episode 12 Persistent fish. (Complete. Another supernatural series with it's own version of the Seven School Mysteries folktales with some darker undertones. The art style did take some getting use to though.) 3.5/5

Yatogame-chan Observation Diary 2nd Season Episode 12 Triple power. (Complete. Pretty much more of the same from the previous season, but it was still a fun series altogether.) 3/5

The show is definitely hitting its stride now; I’m glad they’ve kept Asatani as a regular character, having her as a foil for Toshi really helps the dynamic.

Didn’t remember it from before, but Rin’s continued grumping about having paid over the odds to use the campsite feels entirely relatable. I went to an overpriced calligraphy class a few months back and spent the entire time only able to think about how I’d paid £20 to be there.

Yeah I just looked up the author, very sad to hear.

Konosuba: God's Blessing on this Wonderful World! Legend of Crimson-just as fun as it was when I saw it in a local theater a few months ago.

First 10/10 of the season goes to.... Asteroid in Love. Could easily watch more of this

Finished so far this season:

Ghost Stories
Amazing. So silly and rude but you can tell everyone involved in the dub is having a great time.

Picard
Great little series. Some elements of the finale were a little predictable. Epsiode 7 was probably the best for me.

Clone Wars Season 1 rewatch
Now D+ is out giving this a ful rewatch before the final season. Bit kiddy at times but this season still has some gems in it.

Gonna Be The Twin-Tail!!
Funny and silly. Weaponized fetishes. There you have it.

Brass Eye episodes Animals and Drugs
Hilarious. Had pretty much forgotten the animals epsiode entirely so was nice to watch again. And the drugs ones is great too.

Tenchi Muyo OVA collection
The first season was excellent. The 2nd didnt quite match up to it but still a fun watch. The Mihoshi special was also great fun.