AUKN Staff
The Rising of the Shield Hero episode 21 In a trial the truth can be shocking.

The Rising of the Shield Hero (English Dub) Episode 19
A true and the (unlikeliest) of alliances.

The Helpful Fox Senko-san Episode 8
I'll take a large burger sized beach episode order of fun with a side of Super Saiyan 3 Golden Senko fries to watch this week... ORDER UP.

Please someone tell me I'm not alone and the only one who likes this second season.
Click to expand...

It's a shame that Madhouse aren't doing it anymore, but I still enjoy it.

These two episodes were a slight improvement, but I think I'll just shelve this one for now. Both presented an opportunity for interesting character-based conflict (the lady scientist's strained relationship with her son and the tech-guy's apparent resentment about getting transferred onto the goon squad), but both were quickly resolved in the most banal way possible. I kind of feel like that's the show in a nutshell.

It's the character writing that bugs me most; maybe something is lost in translation, but they're so stilted. There's no rhyme or reason to anything they do beyond 'plot dictates characters must bond, fight monster, insert awful risque joke'. It also doesn't help that the TAC, explicitly described as 'most capable of fighting the monsters' come across more like a group of secondary teachers on the geology field trip than an elite government investigation squad.

Bah. I want to like this. It's a nice looking show and there is a good basic idea here, but it repeatedly fails to make anything of it that isn't formulaic and frequently underwritten.

Attack on Titan [Rewatch] episodes 1-7 - Last watched this in 2016 so my new AU BDs presented a good opportunity for a rewatch. Was pretty much one of my gateway series into anime back then so it'll be good to see how it holds up to recent AOT seasons and my current tastes.

That was a pretty good show, I'm looking forward to talking about it on The Casual Anime Podcast.

First rewatch ahead of a review on the podcast.

Battle of the Great Demon Beasts: Demon of Steel

First rewatch ahead of a review on the podcast.

Mobile Fighter G Gundam Ep 1-9
It's so old school I love it. That OP music thooo 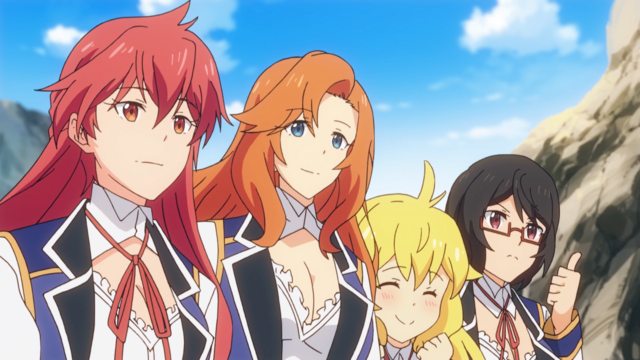 Why the Hell are You Here, Teacher!? Episode 8 (Uncensored)

Forgot it had a fhána ED...

Anyway, such a boring show!!!! could be cut by half and still bore me to hell, the characters aren't even that bad,
even if I can't take out of the mind the bro and sister incest from myself;yourself while watching it
, but crazy how slow it all is, everything is slow, everyone moves and thinks like a snail. took me years to finish cause of that, might watch the new special cause I have curiosity in seeing how it goes at least. 4/10
Last edited: 31 May 2019

Senryu Girl Episode 9
Phone issues and meeting the parents (been there and done that).

Hitoribocchi no Marumaruseikatsu episode 9 Making another new friend who plays hard to get.

Blade Runner 2049 (Film) Finally rewatching this after seeing it almost two years ago. It’s still a sublime experience and one of my favourite modern films as it has atmosphere in spades and never felt like a cheap sequel capitalising on the first films legacy. 5/5
Last edited: 1 June 2019

It hasn't done anything to really wow me, but it's glossy and engaging. The fact that I was able to watch six episodes in a row without getting bored is a good sign.

I also like the new gimmick of the main character carrying his sister around on his back in a coffin. It's like a marraige of Lone Wolf and Cub with Django and it's pretty goddamn metal.

Attack on Titan [Rewatch] episodes 8-13 - So far I'd say I prefer the direction of the later seasons. Still a great first act but later seasons definitely improved on some stuff.