Baccano! - Episodes 4-6 - Just as good as I remember it being, Issac and Miria still a delight to watch lol. Holidays are great, but lord does it always leave me with loads to catch up with. Over the past three days I've watched...

This one has been a very long time coming. Years ago, a good 10+ years when I was still attending university, I watched episodes 1 through 3 of FLCL. And never watched more. Life got busy, I lost track of the series, and over time it turned into a situation of always planning to finish those last few episodes yet never actually doing so. Flash forward to this past Sunday, when during a moment of "What do we do now?" I suggested to a couple of friends that we watch my FLCL bluray collection (a previously unwatched Christmas present). So we start it. Throughout episode 1 both of my friends repeatedly turned to stare at me and ask what the heck I had them watching. By episode 3 I'd lost one of them entirely (he simply wasn't into the show and didn't care to finish it), but the other stuck it out til the end.

I can honestly say that everything I'd heard about the OVA was accurate: it started off crazy and ended just as insane. But daaamn, I still loved it and I'm glad that I finally finished it. I'm just amused that it took me over 10 years to finish a 6 episode series. Amazing how easily time can get away from you. =p 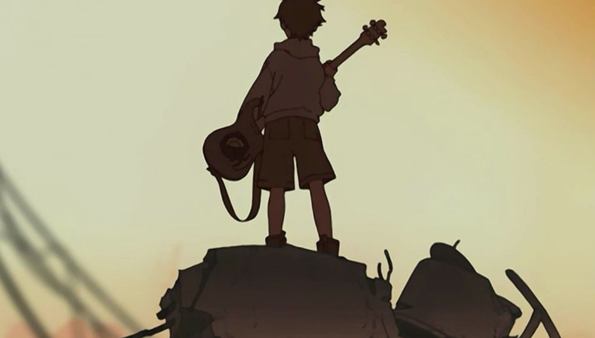 ​
New Game! - Episodes 9-10 - The argument was really cute to watch unfold, especially as it heavily reminded me of myself and a certain friend.

Bananya - Episode 9-10 - I really only have one thought when watching this show: How can banana cats be so darn cute?

Re:Zero - Episodes 22-23 - I have little to add that others haven't already said, but for the most part I loved both episodes. Looking forward to seeing how things are resolved next episode, but I'm going to flip a table if he revives before the conclusion of the white whale battle. D:< Hoping for something unexpected!

Orange - Episodes 9-10 - A nice mixture of sad and feel good moments in these past couple episodes. Looking forward to seeing how it concludes in the end.

Food Wars! - Episode 10 - A satisfying conclusion to an entertaining set of episodes. ^^ It feels like the season should be finished, though, so I'm curious to see what's left.

Amanchu! - Episode 9 - I absolutely loved this episode. Never would have imagined when I first started this series that I'd end up enjoying it to this extent. I suppose that I should have learned my lesson after watching Flying Witch...

91 Days - Episode 8 - Two thumbs up for this one. There was a point that I'd felt 91 Days was dragging but it's really brought itself back - this episode being the best yet imo.

The Morose Mononokean - Episodes 9-10 - It's been a really charming series thus far, especially that episode 10. Very interested in picking up the manga for it once the anime concludes.

momokuri - Episode 19-20 - There's never too much to say about this one but it never ceases to make me laugh.

Servamp - Episodes 9-10 - I've really enjoyed these past two episodes, likely moreso than any episodes that have come before 'em. I finally feel like I'm starting to get properly invested in the characters.

Tales of Zesteria The X - Episodes 8-9 - Still feeling like Mikleo hasn't come into his own yet in this series, and Edna was a bit too meek for my liking. I'm hoping that they can capture her character better in future episodes. Overall though, I'm enjoying this adaption of the story.

Persona 5 the Animation: The Day Breakers - This seemed like a nice, mostly self-contained introduction to the universe and characters, which makes it a good watch for anyone who's been interested in the game. Great usage of Persona 5's flashy style that we've seen throughout the game trailers, too.
Last edited: 7 September 2016 The bowling episode was pretty great! Ep 2 of Nanatsu no Taizai: Seisen no Shirushi
Ep 9 of Tales of Zestiria the X
Ep 10 of Fukigen na Mononokean
Ep 10 of Fudanshi Koukou Seikatsu
Ep 9 of Cheer Danshi!!

Some great Marika bits in these episodes, 5 especially. She never fails to crack me up.

91 Days eps 1-3: Well this is really disappointing. Seems like as dull and cliched a mob show as I can imagine. Not sure if I can motivate myself to stick with it any longer.

And You Thought There Is Never a Girl Online? episodes 3-7.

Episode 8: Shu is probably the best Magical Girl villain ever.

Episode 10: I never would've guessed they'd give Shu an episode and develop him but I'm super glad they did.

The battle with Mozgus was brilliant, I really liked his final form. Kind of bummed next week is the finale, as I said before, after a bit of a slow start, it's gotten very interesting and really ramped up in it's latter half. I do hope it ends with the announcement of another season.

Just when I was thinking Josuke and everyone found out Kira's identity too soon, they go and pull that. Excellent episode.

Checking this one out purely on nostalgia, I loved this show as a kid. These first couple of episodes have been alright, but the plot isn't exactly going just yet. I'm watching it dubbed and, considering it's 4Kids, it's not too bad.
Last edited: 9 September 2016

I tried my best to get through as much anime as I could at home but here's my completed list (including Part releases):


In Japanese with English subtitles:

And You Thought There Is Never a Girl Online? episodes 8-9.