Inside Mari Volumes 3 & 4 - Can't wait to see how this all plays out in the end and am very much enjoying the journey, Oshimi's afterwords were of interest as well as they helped me recall some of my own early experiences of such things

Slave Harem in the Labyrinth of Another World ch 67

That Time I Got Reincarnated as a Slime ch 102

Funny with lots of interesting info on each page.

AUKN Staff
Our Bodies, Entwining, Entwined volume 4 - Felt like this was an overly dramatic volume for no real reason, which is a shame since the series has been better than that so far.

A Side Character's Love Story volume 12 - This one felt like an off-volume between arcs, which is fine since it's still fun to spend time with the cast but does little for plot progression.

Hikaru in the Light volume 4 (complete) - Honestly this one gives off big 'I got axed early vibes', which is a big shame since the premise was quite interesting. Wouldn't really recommend it since it feels like it ended too early, although if you do have an Azuki subscription already and a passing interest in idols then it may be worth your time.

Skip and Loafer volume 6 - All but a volume away from being caught up to Japan now, so I suspect we'll be seeing a lot less of this one going forward. Still very enjoyable watching these dorks go about their daily lives and exciting to think of what becoming second years may bring forth.

I'll Be With Them Again Today volume 4 (complete) - Another one that feels like it wrapped up before its time. It was okay for a standard love triangle shojo manga, but I certainly wouldn't go out of my way to recommend it to anyone compared to some of the way better series on the market.

Reviews to come for:
Wistoria: Wand and Sword volume 1
The Angel Next Door Spoils Me Rotten volume 3 (LN)

AUKN Staff
Classmates: Blanc (complete) - For as much as I've often complained about Classmates in this thread, I quite enjoyed this volume. Maybe just because the characters are getting older and their drama was better explored this time around or maybe because the idea of getting married is somewhat novel in this genre since so rarely does a series run long enough for that to come into consideration.

The Misfit of Demon King Academy volume 3 (LN) - Interesting to learn thanks to the afterword that the author strectured the series
to have a complete arc every three books (I wonder if that sticks later on). The anime is back next seson and this book covered one of my favourite storylines from S1, so I'm quite happy.

Young Lady Albert is Courting Disaster volume 1 - A fairly by the books villainess series, but since it's on JNC no real harm in continuing with another volume or so.

Yakuza Fiancé: Raise wa Tanin ga Ii volume 1 - Spent the first half of this one considering if I'd be continuing into Volume 2 or not and even now I'm not convienced I will. I know the whole point of the series is that the male MC is a total creep, but I'm not sure I want to sit through all the horrible events he's going to cause! I'm also not terribly pleased that the female MC went and sold her kidney! I thought it would be a fakeout at first (which would have been clever), so even despite the fact I liked her throughout this volume I don't trust her not to do something else dumb.

Matcha Made in Heaven volume 2 - This one continues to be cute and has a lot of heart now it's getting settled in its storyline. Definitely eager to see more in the future.

In Another World With My Smartphone ch 73

I will survive using potions! vol 1 & 2 of the manga
Fun read this. I like the MC a lot. She's fun, smart enough to get herself out of problems, constantly learning. The story arcs I'm these first 2 volumes are all fairly short which is good for getting to know this world she wound up in. It's also good because there was a fairly awful Prince character and I was worried he would turn into a love interest. Hopefully he won't come back but I suspect he will.

So I'm a Spider, so what?! Audiobook vol 1 & 2
Very enjoyable. Really like our arachnid protagonist but the sections with her other isekei'd former classmates are tedious and I don't find them particularly interesting. They're a fairly tropey lot. Not sure how I feel about the flash forwards either as I feel it would've been more fun to see it play out linearly.
Last edited: 15 December 2022

Beautiful page compositions as well - I think it was originally a webtoon and they've done a great job with the physical book editions - I can totally see why this was chosen for a Netflix adaptation, it's lovely

In Another World With My Smartphone ch 74

AUKN Staff
Lycoris Recoil Official Anthologies: Repeat, Reload, React - Three fairly interesting anthologies for the series. Repeat had some of the best stories and a load of colour artwork, while React was probably the weakest of the three (doubt I’d rebuy that one if it comes out in English).

Rebuild World volume 2 - The manga continues to be a decent way to consume this story.

Yashiro-kun’s Guide to Going Solo volume 2 (LN, complete) - it really was nice to see the How a Realist Hero Rebuilt the Kingdom author branch out and do something new. Volume 2 was more of a side/after story, but it was still nice to spend more time with these characters.

Rainbow Days volume 1 - This reminds me of Chatter About Love in a lot of ways, namely because it’s a shoujo series told through the eyes of a male protagonist who has a bunch of dorky friends. No idea how it lasted for 17 volumes since there doesn’t seem like there’s enough going on here to hold it over that long, but I liked it enough to continue with anyway.

Reviews to follow for:
Run Away with Me, Girl volume 1
The Dark History of the Reincarnated Villainess volume 6
A Galaxy Next Door volumes 2-3

School-Live vol 12 (complete)
Going back to the source.
I enjoyed this quite a bit, especially past the part where the anime left off when it started to get darker. Even the part covered by the anime felt a bit darker than I remembered, maybe I'm misremembering or the black and white nature of manga just made it seem bleaker. There were 2 further arcs after the anime finished, the first of which I felt took a few wrong turns, it felt a little rushed and thus the edgy gang never got fully explored and also the murder of a little girl our main group had picked up felt very unnecessary! But things did happen to explore the girls characters a bit further than before and then the second arc showed them growing as people, especially Yuki who's relentless upbeat personality grated a little earlier on.
The art was very good too.
7/10
Last edited: 10 January 2023

Vinland Saga vol 17
Ghosts of the past.
One chapter had some glaring historical inaccuracies which took me out of the story for a bit, then I read the afterwords and found out the idea for the thing in that chapter was from an anime, LOL! 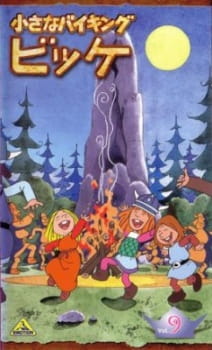 Long ago, in a little Viking Village called Flake, young Wickie lives a happy life. His father, Halvar, is the chief of the Vikings, and would have liked a son a little more courageous. So, he and his team take Wicke along on their journeys to give him the experience he'll need to be a real...