Back in the 90s, when we had the first big wave of anime video releases, every new show or movie used to hit me like it came from outer space. I had no knowledge of the cultural context that had informed the stories and characters I was seeing, so it all seemed unique. Looking back now, I can see just how heavily some stories were influenced by tokusatsu, especially when it came to anything with a masked or helmeted hero. It's funny, because we were seeing some tokusatsu shows airing on TV around the same time in chopped up form, but my brain just didn't connect the dots.

The Guyver. Looking at it now, the influence of Masked Rider and similar shows is clear, from the insect exoskeleton look of the armour to the evil corporation dispatching its scheduled monster-of-the-week.

Bubblegum Crisis. Looking at the Knight Sabers posing on a rooftop in their colourful armour and faceless helmets, there's a real feeling of Super Sentai to it, albeit translated into the visual language of cyberpunk.

Sailor Moon. This story's big revolution to the magical girl genre came by merging it with the sentai battle format. It had everything but the masks, and considering that its immediate predecessor Sailor V was a masked hero, I suspect that dropping the masks was more of a marketing decision.

Evangelion. There's as much Ultraman in this as there is anything from the giant robot genre. Adam is even referred to as a "giant of light", a term often used to describe Ultraman, and of course Anno was a notorious fan.

It's probably no coincidence that these examples all followed a time when tokusatsu shows were a lot more successful on Japanese TV. We just don't seem to see the same influence in today's anime heroes. The only masked hero I can think of in recent memory is in Netflix's adaptation of the Ultraman manga, which is directly from one of the big franchises rather than being an indirect influence. Instead we tend to get more influence from western superheroes with the likes of One Punch Man and My Hero Academia, or you have isekai heroes where everyone just rolled an RPG stats sheet.

Can you think of any significant examples I've overlooked: shows that borrow heavily from tokusatsu, while not actually being adapted from one (like Kikaider or Ambassador Magma)? Did this influence survive past the 90s at all?

Im no connoisseur of tokusatsu but Samurai Flamemco definitely has parts of its story that are in the genre. The show switches genres many times to act as tributes to the different types of hero show.

Also I dont think it's really in the vein of what you mean but Lelouch/Zero is a masked anti hero in Code Geass.
A

SSSS.GRIDMAN is a good example of a more recent series and is a spin-off to the original Gridman series with big monster of the week kaiju fights. Really fun show

This is, at most, a little nod, but I just noticed in the final episode of Tsurune that the handles of the team's bows are in Super Sentai colours: vivid red, yellow, pink, green, and blue. I'd have to go back and watch it again, but I wouldn't be surprised if they matched the bows to the personality types normally associated with those colours.
N

Dai said:
Can you think of any significant examples I've overlooked: shows that borrow heavily from tokusatsu, while not actually being adapted from one
Click to expand...

Studio Trigger's SSSS.Gridman springs to mind for me.

I know basically nothing about the tokusatsu original, but I get the strong impression that the anime is surely more inspired by it rather than being adapted from it.


Based on that trailer, I can't tell if these are giant robots or human-sized power armour. The designs and colour schemes feel very tokusatsu though, and it looks like there are mobs of identical masked goons. I'm getting a Darling in the Franxx vibe from it too.
N

Dai said:
Based on that trailer, I can't tell if these are giant robots or human-sized power armour.
Click to expand...

The scale is difficult to gauge. I don't see them as giant robots, because there's no sign of them being "piloted", and the animation seems to show a transformation sequence, implying that the characters "become" the fighters themselves. They could very well be giant in size, though, à la Ultraman or SSSS.Gridman. Transforming using an adornment worn on the character's arm is also very reminiscent of the latter.


Dai said:
I'm getting a Darling in the Franxx vibe from it too.
Click to expand...

Me too. Looking at the staff list on MAL... 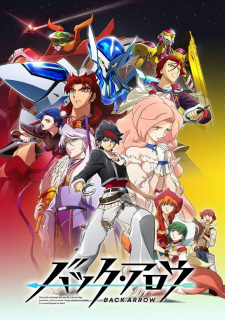 Characters, voice actors, producers and directors from the anime Back Arrow on MyAnimeList, the internet's largest anime database. The world of Lingalind is surrounded by a mystical wall with seemingly nothing beyond its confines. Worshipped as the mother of the land, the wall delivers celestial...

myanimelist.net
... one of the standout names is writer Kazuki Nakashima. He was writer on Gurren Lagann, Kill la Kill and Promare, and was also involved in the making of FranXX.

Looking at the character designs, the title character has a very strong Kill la Kill influence, and I can see some Tiger & Bunny and Evangelion Rebuild in there, too, alongside the FranXX.

Considering the writer, I wonder if the title is meant to be a play on bakayaro. Seems like the kind of goofy wordplay he would go for.
N

Dai said:
I wonder if the title is meant to be a play on bakayaro.
Click to expand...