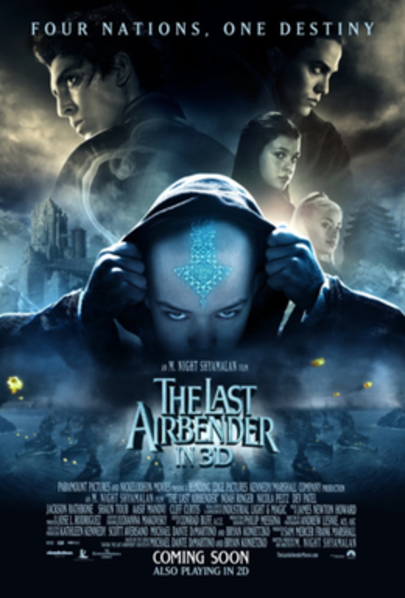 It's been 2 days since it's release now and I didn't see another thread for this, so here we are (sorry if one already exists!). For anyone that doesn't know, The Last Airbender, adapted from the Nickleodeon Cartoon Avatar - The Last Airbender, is directed by M. Night Shyamalan (Signs, The Sixth Sense) and was released on the 1st of July.

Now I know it's not good for OP'S to start this way but from what I've been told by my friends and other online people (I haven't seen it yet myself), the film is utter trash and a complete let down especially to fans of the original cartoon, which is a big shame since I thought the cartoon was brilliant and I couldn't wait to see this.

I'm not trying to put anyone off (though it sounds like keeping the money is better in the long run) but any plans I had of seeing this have been crushed. Anyone still going to see it/already seen it?
D

im gonna see it myself rather than listen to other peoples opinions this time cause i want to have my own opinion of it by experiencing the thing myself. that is all

I usually do the same and just brush them off, but as there's 100 overwhelmingly negative reviews for every 1 positive comment for this... well, I'll wait for Toy Story 3 >_>
J

I'm finding it hilarious. It's so odd matching up Shymalan's interviews with the end-product because throughout he really talked as if he knew what he was doing but once again it shows its harder than it looks to make a family friendly film.

I'd rather see Eclipse...
K