Ten Years Ago…What Were You Watching in 2011?

AUKN Staff
What anime series were we watching in 2011? The writers at Anime UK News turn the clock back to unearth some of their favourites - but have they all stood the test of time?

Nice article and fun to look back. 2011 was only my second year of serious anime collecting. I'd first watched Ghost in the Shell in 08 maybe, which is how I started initially.

But going through my Amazon order history there were a fair few good shows I first watched in 11. One that I was very excited to get, as it was the same writer/director as GITS:SAC was Eden of the East. That show was amazing! Great mysterious story, interesting characters great animation.

I also saw Summer Wars for the first time which remains (by far) my favourite Hosoda film. Everything about it is sensational!

Also watched Rumbling Hearts that year which is a sensational drama. So tragic and emotional (along with She, the ultimate weapon, which I'm guessing I bought in a store that year, are the animes that got me to start crying when watching something emotional.)

Incidentally it was also the year I started Bleach, the first of those long running shonen shows I ever watched.

AUKN Staff
@WMD: Thank you for reminiscing with us - some really great titles there, especially Eden of the East; a big yes from me to that one too!

Also Rumbling Hearts and She, the Ultimate Weapon - I confess I'd forgotten about those two but it all came back to me when you mentioned them. (I wonder if that's a trend that's less prevalent today...?)

One of the benefits of keeping a spreadsheet! Took me only the length of a Radiohead CD to sort and filter.

In 2011, I watched, and indeed rewatched 505 anime discs, of which 155 were first time watches. Note that I'm counting individual discs, not complete collections (except for Naruto).

Bamboo Blade
Birdy the Mighty Decode
Casshern Sins (still lament part 2 being DVD only in the UK, That was one beautiful depressing show)
Darker Than Black: Gemini of the Meteor
The Disappearance of Haruhi Suzumiya (S2 and the shorts also came out this year)
The Eden of the East Movies
Evangelion 2.22
Freedom
The final three Fullmetal Alchemist Brotherhood releases came out in 2011
High School of the Dead
Gunslinger Girl Il Teatrino
The first three K-On! discs came out this year
Phantom: Requiem For the Phantom Part 1
Redline
Rideback
Sacred Blacksmith
Shikabane Hime
Sound of the Sky
Strike Witches
Summer Wars
The Tower of Druaga
Xam'd

From what I can see of that list, Manga Entertainment were killing it in 2011, even with their Blu-ray problems.

I can't remember that far back, but not much! Only started seasonal in 2018.

Looking back on my posts from my first stint here I didn't post at all in 2011 after the Manga Force Collection ended late 2010, so I might have been watching some of those. I made 2 further posts in 2012 before going on a 5 year hiatus where I spent the second half of 2017 catching up on stuff I missed.

Using anime.plus I can see what I watched from that year and it's a mixed bag:
Anohana, Chihayafuru s1 and Steins;Gate plus the film From Up on Poppy Hill being highs with We Without Wings being a low. And then somewhere in between Nichijou (still on hold) and K-On s2 being my least favourite KyoAni's, that I've seen, and the K-On Movie which is OK and Children Who Chase Lost Voices being my least favourite Shinkai.
There's also Fate/Zero s1 (ie the duller season) and OREIMO s1 specials (ie not "those ones").

I didn't start watching anime until 2012 so I was watching Breaking Bad and Game of Thrones most likely.

Looking back though, 2011 gave birth to many series I would call modern classics: Anohana, Chihayafuru, Fate/Zero, Hunter x Hunter, Madoka Magica, Nichijou, Steins;Gate, Tiger & Bunny, Usagi Drop. All 9/10 or above for me.

Some notable ones I still want to see: Gosick, Hanasaku Iroha, Hyouge Mono and SKET Dance. 2011 is when I joined Crunchyroll and discovered Nichijou.

AUKN Staff
@Just Passing Through : That's a truly impressive list (a proper database!) - and you're so right about Manga Entertainment back then for R2 releases!

I was basically just getting started with watching anime in 2011, the year I turned 50 years old - My two daughters re-introduced me to anime after 40+ years of dormancy, lol! I had watched original US TV broadcasts of ancient anime series like Speed Racer, Astro Boy, and Kimba the White Lion way back in the mid to late 1960's when I was a kid (In black and white of course back then!), but then I never watched any more anime after that, and didn't even know it still existed.

So in 2011 my daughters first showed me The Girl who Leapt through Time, Spirited Away, and a few other Studio Ghibli movies online. That got me started, and I began watching some anime series on Netflix, starting with Last Exile, Blood+, Chrome Shelled Regios, Angel Beats, Rosario + Vampire, Origin, and a bunch of other series I don't recall anymore. After all those I was pretty much hooked on anime. I then also started watching a few anime on TV, early Sunday mornings on Adult Swim - Durarara!!, Cowboy Bebop, Ghost in the Shell, Casshern Sins, and even a bit of Inuyasha. Dragon Ball Z was also airing then, but I watched a few episodes of that and thought it was really dumb and childish, so I usually ate my breakfast during that time slot. It didn't take me long to realize I did not care for any of those big shonen series that were also airing then - DBZ, Bleach, One Piece, Fairy Tale, Naruto, etc. I quickly learned to avoid them at an "early age," lol!

The first anime I ever bought on disc was also in 2011, The Girl who Leapt Through Time on Blu-ray. That was the only anime I bought that year, but in 2012 I started buying some Studio Ghibli titles on Blu-ray - Castle in the Sky, Arrietty, Whisper of the Heart, Ponyo, and also Children Who Chase Lost Voices. Then in 2013 is when I stated going hog wild with anime Blu-ray purchases - 110 titles in just 8 months, May to December, including importing 13 of the Studio Ghibli silhouette digipaks from Japan, and hundreds more titles every year after that, up to the present! It's been a crazy and extremely expensive hobby, but I've loved every minute of it!
Last edited: Sunday at 5:16 PM

Reading this thread brings me back some memories, realising that time flies

AUKN Staff
@Girls wIth Guns : That's another truly impressive list - and The Girl Who Leapt Through Time: what a good choice to start your Blu-ray collection with! (Not biased toward that film in any way, me, no...) This was a great article - it's fun to look that far back!

It's funny which series end up staying with you. I watched Sora no Woto as it aired, and didn't think it made a particular impression - but I still find myself thinking about certain scenes years later. Beautiful show.
R

I have no idea XP I know I started watching anime before 2011 though so there will definitely have been some anime in there. I was 21-22 that year @Sarah, I loved Noein and Birdy the Mighty Decode (was just rewatching that fairly recently actually as I do still have my DVDs of it sitting proudly on my alphabetically ordered shelves!) and also enjoyed Nabari no Ou, have you read/do you recommend the manga and did you like Escaflowne (also directed by Kazuki Akane)? Steins;Gate was also an amazing series and Fate/Zero was interesting, def. worth a watch I hope I actually get around to watching Sound of the Sky eventually...
K

2011 was the year I started watching anime properly, but was also therefore the last year in which I didn't watch any series from that year... until 2020. So the things I was watching that year were watching Inuyasha, Naruto, Bleach, Code Geass, Haruhi, Clannad, all of which were enjoyable (or at least were in the parts that I watched that year). But also School Days (because it was still such a popular meme back then), Ranma 1/2 (because it was by the same person as Inuyasha) and Gintama (because so many people rave about it for some reason) which were not. And that's it. That's literally every anime I watched any of in 2011. Yet I spent considerably more time watching anime in that year than in any year since, even with over a hundred things in some years. Strange, that.

AUKN Staff
@RadFemHedonist : Oh yes, I loved Escaflowne. I think it was one of the first anime TV series I'd encountered that wasn't straight out of Shonen Jump or Studio Ghibli (although I loved those too but for different reasons). But Yoko Kanno's music had a huge impact on me. And I'm very happy to find another fan of Noein and Birdy the Mighty Decode (I'm still digging through my boxes, as I'm now determined to rewatch it!)

And I really do recommend the manga of Nabari no Ou. Yuhki Kamatani is (imho) one of the most interesting mangaka working at the moment and I can't wait to read their new manga when it eventually (hopefully) is released over here.

Here, I dug my copies out for you, Sarah! So how close to Pennsylvania do you live? Lol... 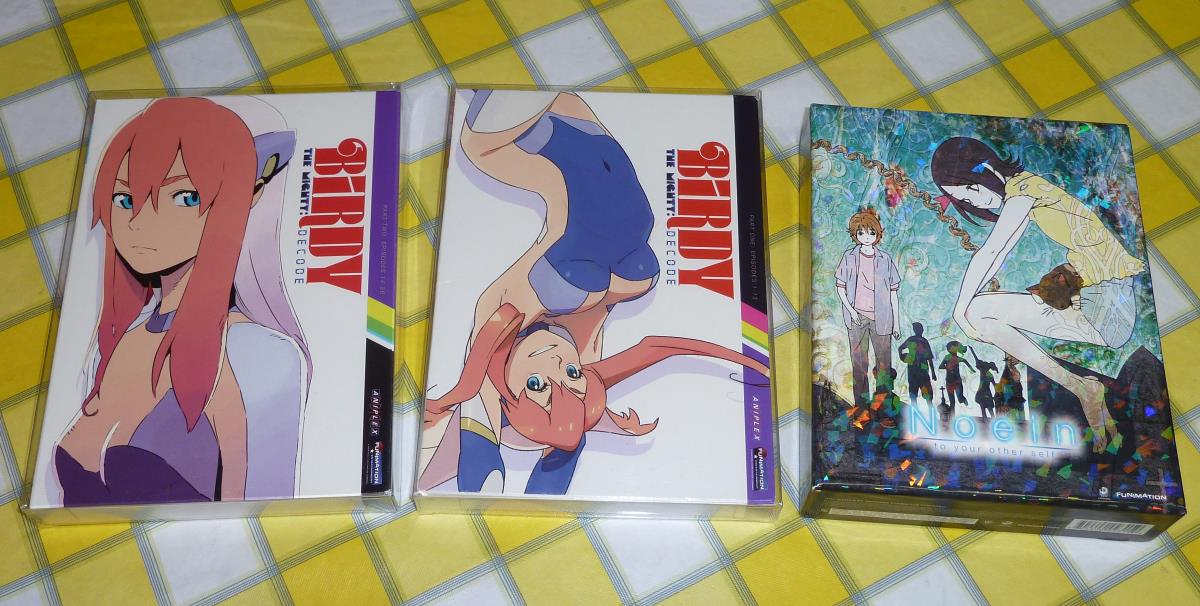 I didn't start watching anime until late 2013/early 2014, but better late than never, I did watch a few 2011 series, and I know that's cheating, but out of those so far, I watched Madoka Magica, Anohana, Blue Exorcist, Guilty Crown (which had its second cour aired in 2012) and Croisée in a Foreign Labyrinth.

AUKN Staff
@Girls wIth Guns : Ve-ery nice! (I like the Noein box too which is quite different from the one I have. I really love different cover art.)

Sarah said:
@Girls wIth Guns : Ve-ery nice! (I like the Noein box too which is quite different from the one I have. I really love different cover art.)
Click to expand...

The US Funimation LE Blu-ray box is covered with iridescent metallic flakes on all five sides, so it really looks pretty in the light. I also have the old Manga Noein DVD box set, it has nice art work too, maybe yours looks something like this?

And, while you're on the subject of Escaflowne, I'm also a big fan of that series too, if you can't tell, haha... 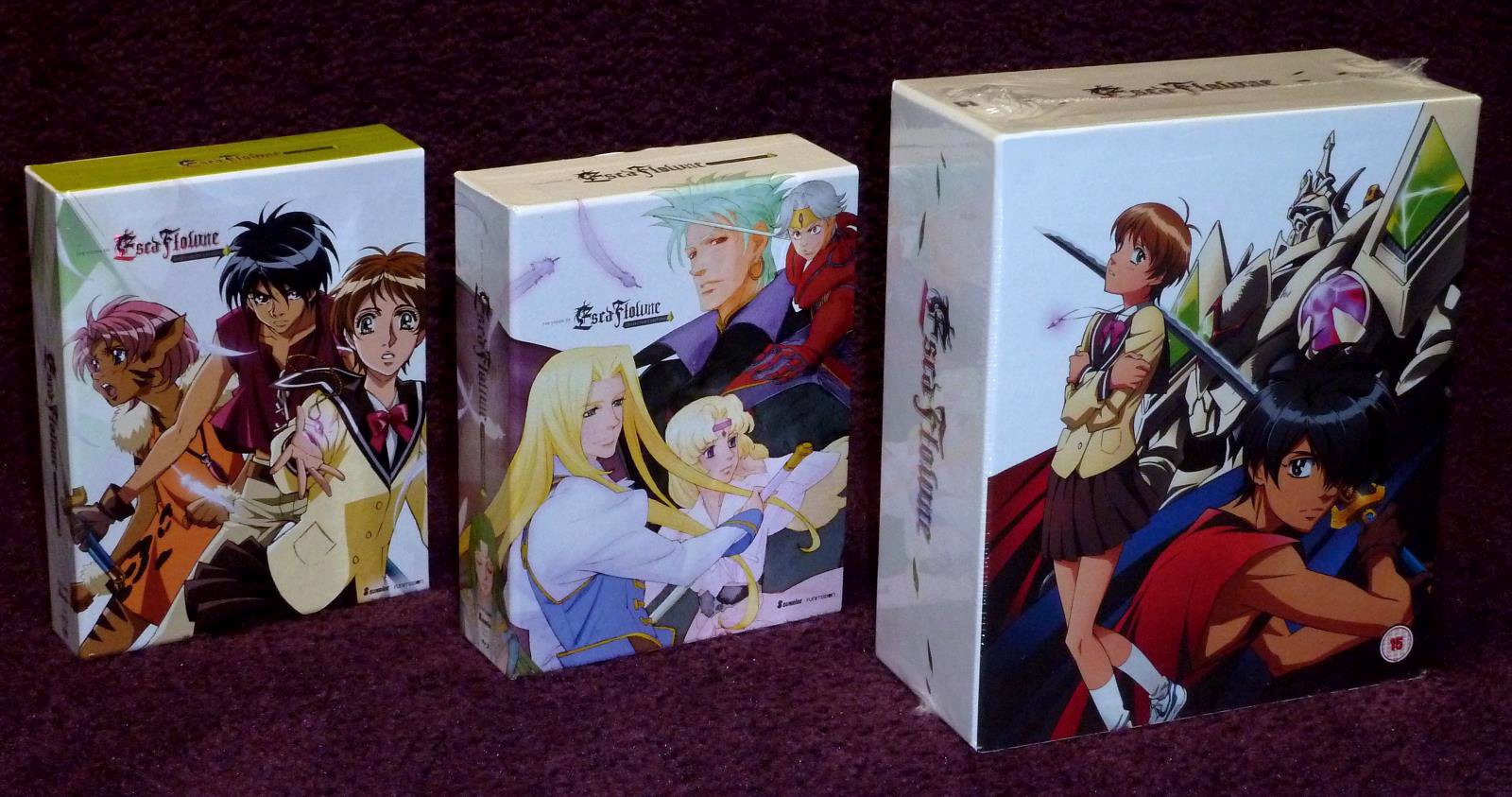 Looking Back at the Autumn Season 2020 - Our Favourite Shows