On a dark and stormy night, inside Mattis’ Castle, which is home to a band of robbers, a little girl named Ronja is born and the lightning storm tears the castle in two. Ronja is the only child of the robbers’ chief and wants for nothing, until one day she meets Birk, the first child she’s ever known, who just happens to be the only son of a rival robbers’ clan chief. As their initial hatred grows into friendship however, their lives, families and the long history between the clans are changed forever.

Studio Ghibli has been an animation powerhouse for over 30 years now; however, despite being a beloved name for many, it has done little outside of its feature films. Its filmography is, of course, highly respectable and vast, but considering that it’s often likened to Western animation company Disney, it’s interesting to see how much smaller its catalogue and variety of output is in comparison. Since Hayao Miyazaki announced his ‘retirement’ in 2013, however, it seems that Studio Ghibli has made more of an effort to branch out outside of movies, presumably to not rely so heavily on Hayao Miyazaki’s legacy to maintain itself. This includes video game production (Ni No Kuni: Wrath of the White Witch), co-producing smaller-scale movies (The Red Turtle) and recently, its first step into television production, with Ronja the Robber’s Daughter. 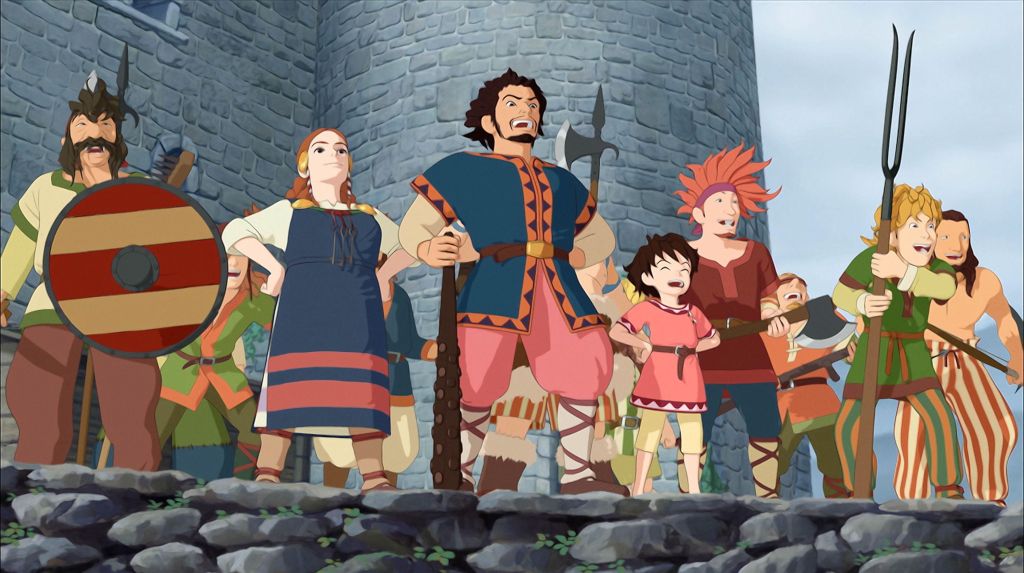 Based upon the Swedish children’s fantasy book of the same name by Astrid Lindgren (Pippi Longstocking) Ronja was directed by Goro Miyazaki, who said in one interview that he wanted to create a series “that everyone, from children to adults, will be able to enjoy.” It’s a hard thing to accomplish, despite the likes of Dreamworks and Pixar achieving it multiple times in their filmography, and Goro’s own father has made a name doing this whilst still creating thoughtful and unique movies. I have no doubts that this is what Goro was also striving for, however he does not succeed and Ronja the Robber’s Daughter stumbles too many times to truly live up to his promise.

The first, and most obvious, flaw in Ronja is that it’s too slow. Not just the pacing (which IS a major issue in itself) but everything about the show is slow: the story moves slowly, the characters move slowly, the relationships between them develop slowly, there are unnatural breaks in dialogue that make whole scenes progress slowly, and all of that together makes you feel like you’re trying to walk across a thin road through melted tar that’s constantly pulling you down. The series is 26 episodes long, but easily over half of its runtime is filler and it’s only towards the second half that the story really starts to get going. Filler, by itself, isn’t a sin as it’s important to help build characters or sometimes provide comical breathers in between emotional developments, however when it outweighs the amount of time spent on the story, then it becomes a hindrance. The series just loves to STOP the plot for several long-running minutes to have Ronja running around the forest, or laughing and playing with Birk, and the first few times it works to build her character as this fun-loving free spirit. But 10 episodes in, when similar scenes have played across every episode so far, the patience is lost and you just want the series to get on with it, let alone 20+ episodes in, when the forest scenes just become a dreaded experience. The original storybook it’s based on was only 235 pages long, and even though I haven’t read the book myself, it seems that the series follows the book faithfully, but it’s clear that the length of the story wasn’t enough for a 26-episode series. Instead of producing extra story content, Goro Miyazaki decided to add cute but ultimately fruitless dialogue scenes and long pan shots of the forest that are pretty but very repetitive.

The other reason that Ronja doesn’t really work as an ‘all ages’ show is that it’s low on the fantastical elements and varied sense of humour that Studio Ghibli has come to be known for and older viewers will be expecting. That’s not to say that the show lacks them entirely; when the series goes for the bigger moments such as the first time we meet the creepy grey dwarves, or when the fearful harpies attack, or the emotional separation between the two kids, it all really works, feels genuine and can be enjoyed by older and younger viewers. Nevertheless, due to the aforementioned incredibly slow pacing, these moments feel like they come out of nowhere as they often require an abrupt change of tone or atmosphere to plant the moments correctly; one moment Ronja is peacefully playing in the forest, the next, her life is in danger. It’s like driving down a scenic, flat, uneventful country road, yet once every few hours you’re suddenly faced with a speed ramp. These moments are merely small specks of gold scattered across wide stretches of uneventful episodes, and there will not be many older viewers, even die-hard Ghibli fans, that have the patience to wait for them. 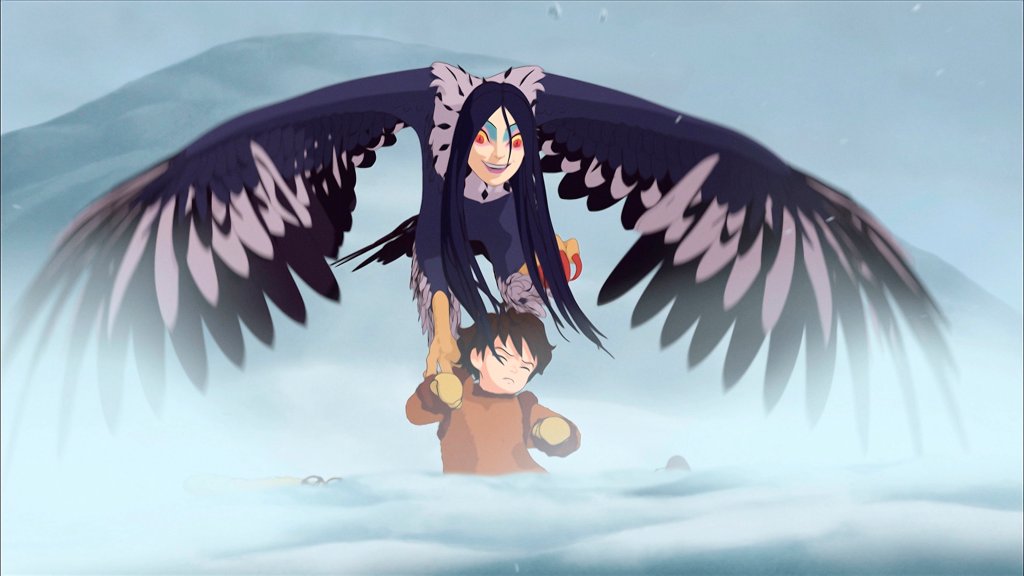 So, if we take the series as a children’s show, rather than an ‘all ages’ or a Studio Ghibli series, does it hold up? Speaking as someone who has worked in kids’ TV for over 10 years, and has seen a lot of children’s show across different regions and target age groups, Ronja isn’t a bad show. It’s a nice little uncomplicated story with likable characters and no bad messaging. A few of the scenes with the creepier creatures aren’t too scary for younger audiences as it’s all kept within its ‘fairy tale’ atmosphere and tone. Although I’d be hard pressed to find a child who would be able to be fully engaged all the way through due to the long stretches of filler and story pauses, nevertheless it’s a decent show to exposed them to as an early anime introduction.

From stills the series looks very similar to other Studio Ghibli titles, but it should be noted that despite the lovely 2D backgrounds, the characters are rendered in 3D and therefore it looks closer to the PS3 title they co-produced, Ni No Kuni: Wrath of the White Witch, than any of their films. Therefore, we lack the ‘emotional hair’ trait that Ghibli is known for as it doesn’t move in 3D, but their unique character designs still come through the added dimension.

All 26 episodes are included in the set, extras can be found on the last disc and they consist of 5 ‘Making Of’ featurettes, a press conference video and an interview with the director Goro Miyazaki. It should be noted however that this set contains the English dub ONLY, there’s no subtitles or Japanese audio track. As a series aimed at children, I can understand why that is as they will not have a need for a language they don’t speak and most kids would not be comfortable with subtitles. However, considering that the packaging of the disc is meant to sit harmoniously with the rest of the Studio Ghibli collection and how they ALL come with Japanese and English tracks, having Ronja without any seems very backwards in comparison. Having said that, the English dub is overall very strong, and like most of Studio Ghibli’s dubbing it’s full of celebrities providing voices from Bob Goulding to Gillian Anderson. The highlight of the dub however goes to Rufus Hound as the father Mattis; not only does he have a great voice but he actually performs as an actor perfectly with the heart-on-his-sleeve character who ranges from anger at one moment to jumping for joy the next. This seems to be his, so far, only voice acting role but I hope he does more in the future.

Ronja the Robber’s Daughter could have really benefited from having a tighter time frame, brisker story and character development, as the incredibly slow pace hinders the series considerably. There are some good ideas in here, and lovely animation as always, however this is primarily aimed at very young kids and therefore anyone outside that demographic would mostly find this 26-episode venture hard to get through. I hope Studio Ghibli learns from this experience, and considers making more TV series in the future, but Ronja the Robber’s Daughter is not the brightest spark in their repertoire. 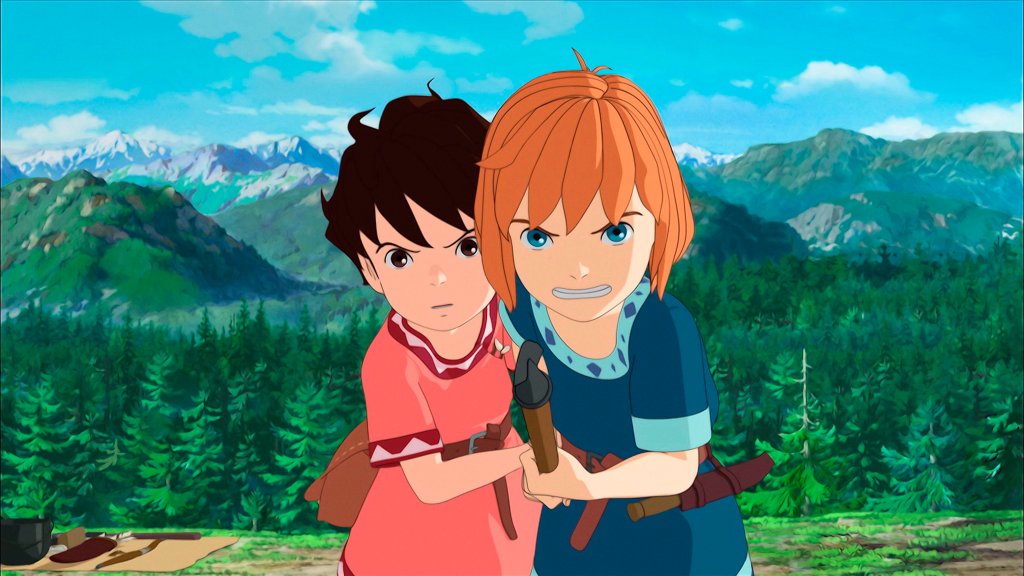 thanks for the warning i was going to buy it tomorrow, but dub only no chance, hopefully there will be a USA release with the Japanese subbed

Couldn't make it past the first couple of episodes of this; it's just excruciating to look at. I cannot remember another time where a film/series' visual style actively put me off watching it.


darkstorm said:
Ronja was directed by Goro Miyazaki, who said in one interview that he wanted to create a series “that everyone, from children to adults, will be able to enjoy.” It’s a hard thing to accomplish, despite the likes of Dreamworks and Pixar achieving it multiple times in their filmography, and Goro’s own father has made a name doing this whilst still creating thoughtful and unique movies.
Click to expand...

And TV series, lest we forget Future Boy Conan. Takahata also crafted Anne of Green Gables, Heidi and 3000 Leagues in Search of Mother into 3 near-perfect medium-defining series in the years before Studio Ghibli was set up. I think I've ranted about this for about the past 4-5 years now, but the fact none of them are readily available (legally) with subtitles is borderline criminal.

People don't like the artstyle but is very similar to No ni Kuni which people seem to like.

darkstorm said:
It should be noted however that this set contains the English dub ONLY
Click to expand...

I think the CG in video game cut scenes are something gamers are used to plus they last mere minutes, where as 25 minutes of an episode was enough to put me off.
NNK character models were also better than Ronjas.
Last edited: 3 December 2017