I have been itching to do my own podcast for a few years and I have finally got round to doing it!

The Retro Anime Podcast focuses solely on anime from the 60's through to the mid 90's, the first episode reviews some well known but largely forgotten films Odin & Lensman.

The podcast can be found at the website (which is very basic at the moment) www.retroanimepodcast.com or at podomatic by searching Retro Anime Podcast.

Please have a listen and I would be interested in what you think!

Moderator
Got a chance to sit down and listen to the episode today, definitely an interesting couple of choices for discussion.

I do know of Odin, but afraid all I've ever seen of it is the fleeting glimpse you used to get in the old Manga Video promo trailer. Was intrigued to hear that Loudness were involved with the music for it though - I liked their opening track for Mazinkaiser SKL.

With Lensman, it was mostly just the Kawajiri connection that drove me to watch it. Can't remember much about the story now, but I did think it was a good looking film and, comparing it with some of his later work, it does seem like you can sense Kawajiri's hand at work in the action sequences.

I really do wish somebody would get hold of Lensman and put it ut on DVD. There's a whole TV series as well, I believe.

Odin, on the other hand... that film is to me what garlic is to vampires. Nobody who values the potential to do great things with two hours of their time should ever waste it on that abomination!

Moderator
Something in the back of my mind says the wonderfully cooperative Harmony Gold had a hand in one version of the Lensman anime in the US, but you'd think that would hardly affect any potential rerelease in Japan. I did also wonder if there might be some legal wrangle with Doc Smith's estate preventing any reissue, but who knows?

Edit: Yeah, Mike Toole suggests it is the author's estate. He speculates that it may be down to them trying to get a Hollywood movie off the ground, or due to Smith's granddaughter's allegedly vocal dislike of the liberties the film took with the story.
Last edited: 25 September 2016

Professor Irony said:
Got a chance to sit down and listen to the episode today, definitely an interesting couple of choices for discussion.
Click to expand...

Thanks for listening and replying!

We're currently finalising content for the next episode. which hopefully will be recorded in the next couple of weeks. I openly admit Odin is a divisive film and has its flaws but it has a charm that I really like about it, each to their own and all that!!!

After a few setbacks, Lewis and I have recorded episode 2 where we review Gunnm (Battle Angel) & Grey: Digital Target.

Moderator
I kind of like the art for Grey (even borrowed the baseball-style helmet design for something I drew myself once), but it's not one I've ever actually watched. By the sounds of things, I'm not missing much :/

With the Battle Angel Alita ovas though, I think what sticks in my mind most about them was their atmosphere of melancholy. I know a lot of the old cyberpunk ovas could be quite downbeat, but maybe it was that contrast of lighter moments with much darker themes that made it stand out - it's kind of weirdly whimsical amongst all the gore and sense of inescapable fate.

Thank you for listening to the podcast.

I completely agree with your sentiments regarding Battle Angel, it does have a strangely melancholic atmosphere against the grim reality of the world the characters live in.

Grey is held up as this cult classic but I think it is quite unjustified as the anime is average at best, apparently the manga is very good though.

Hopefully Lewis and I will be recording the next episode of the podcast soon.

Episode 3 is now up with reviews of obscure OVAs Goddamn and Salamander.

Episode 4 went out yesterday. This episodes is a Mamoru Oshii special with reviews of Angel's Egg and the original Ghost in the Shell movie to tie in with the recent release of the live-action Ghost on the Shell film.

Lewis and I will be recording the next episode of the podcast this weekend.

This episode will be a fantasy special with a look at renowned sci-fi directors who turned their hand to fantasy with reviews of Yoshikazu Yasuhiko's film Arion and Ryousuke Takahashi's OVA Mozaika.

If anyone has any questions or comments for the podcast please leave a reply here.

Moderator
It's probably something that would come up anyway, but as Takahashi seems to work almost exclusively on very politicised sci-fi anime, I'm curious as to how that might inform a fantasy series like Mozaika. Like, I guess what I'm asking is whether it feels like Dougram or Votoms after a visit to the dressing up box, or whether it has a more distinct identity of its own.

Actually I guess you could say the same thing about Yasuhiko too.

Great question! The first one for the podcast

That was angle that we were going to cover for both anime, do the sci-fi elements both of these directors are renowned for translate to directly to a fantasy work? I certainly have some views on this having re-watched both anime recently. We will discuss the point as a response to your question during the podcast.

Thank you for your interest in the podcast.

Moderator
Finally got around to listening to episode 3 today. I've only ever seen the first part of Goddamn, but would agree that it seems a bit inconsequential. It's probably just a condensed highlight reel for the manga, but even at that, it didn't seem too compelling - I think it's by the same author as Area 88, so I'd have hoped for a bit more. It did amuse me though that this is probably the only ever anime appearance of old lads' mag favourite, the Sierra Cosworth.

Salamander though, I'm sure had a UK release in the VHS days. I want to say it was through Kiseki, as I think they had a deal with the Sci-Fi channel to air a lot of their more obscure acquisitions in the wee small hours at one point, and I feel Salamander was one of them, as I definitely remember the little bit of footage from the game being on along with it. Can't remember anything else about it, but it sounds like something I'd enjoy, so I'll need to look into that.

Goddamn is throwaway entertainment but I would be interested in reading the manga to see if there is any other substance to it.

After a little digging you're right, Salamander did get a UK VHS release but through Western Connection not Kiseki. I'm surprised I didn't pick up on that at the time because I was all over any new sci-fi anime that came out, but I do remember it was quite hard to get hold of the videos from those really small distributors so maybe I just never saw it in a shop and I didn't buy Manga Mania every month so probably wasn't aware that it had come out either. I would definitely recommend checking it out.

Episode 5 is out with reviews of Arion and Mozaika.

I hope you enjoy it.

Lewis and I should be recording Episode 6 of the podcast this weekend.

We will be focussing on anime based on fighting games and we will review the Street Fighter II movie and Voltage Fighter Gowcaizer OVA.

Any questions or comments regarding these anime or anything else we've discussed on the podcast please leave a reply here.

Moderator
Having listened to episode 5, I was curious about how you feel Arion compares to Yaz's later film Venus Wars. They both sound like they're dealing with quite a complicated narrative, but I found Venus Wars a bit vague and unfocused.

Can't offer much insight on the upcoming anime, but I was amused when I saw this unused character design for 'casual Ryu' from the SF2 movie on twitter a couple of days ago. Not hard to see why it was dropped - I can't see Ryu as the kind of guy who'd be kicking about with a giant 'R' on his shirt... 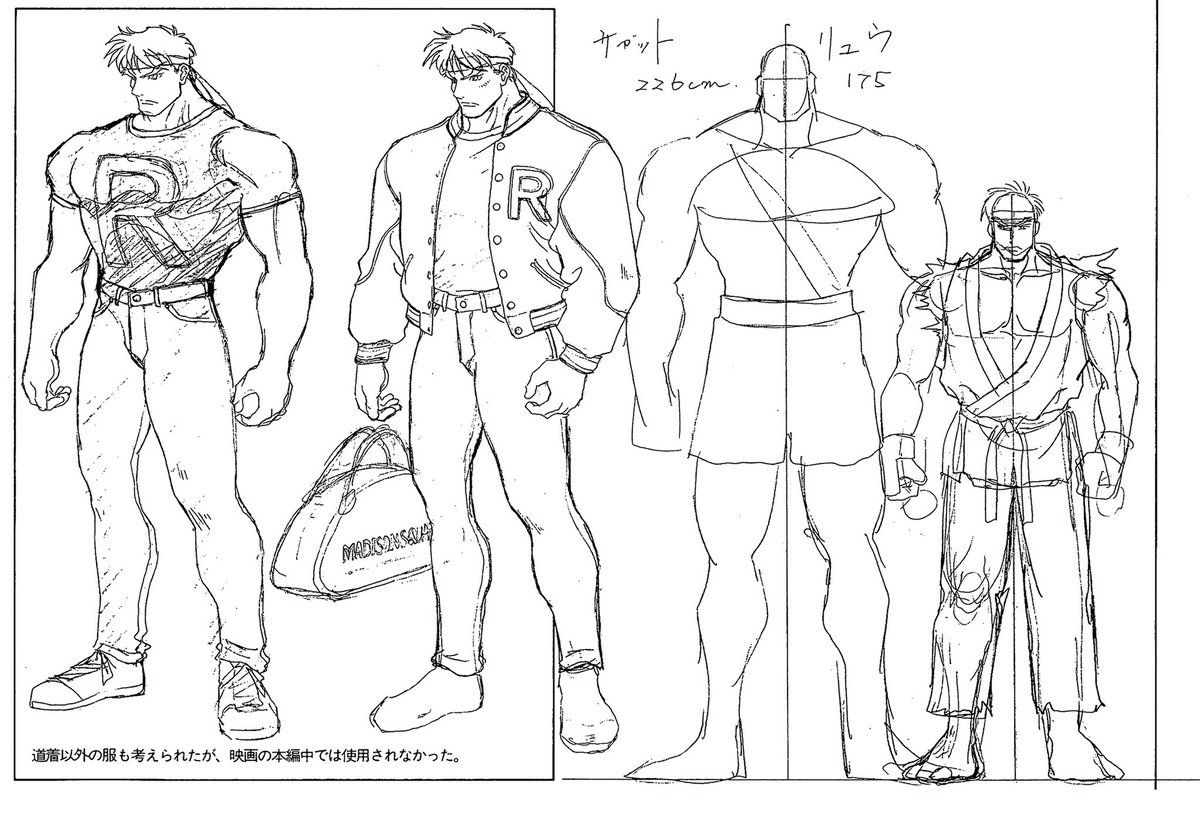 Thanks for that, I've sent it to Lewis and will mention it during the podcast, I agree not difficult to see why that was dropped!

Arion definitely has a more focused narrative than Venus wars, I quite like Venus Wars despite its flaws but I felt Yas was maybe a little blinkered with it, having seen Arion I think maybe he was trying to recreate something similar in a pure sci-fi setting but lost sight of what he was trying to achieve. Arion for me is Yas's best work.