Moderator
Two podcasts in less than two months? Must be a leap year. 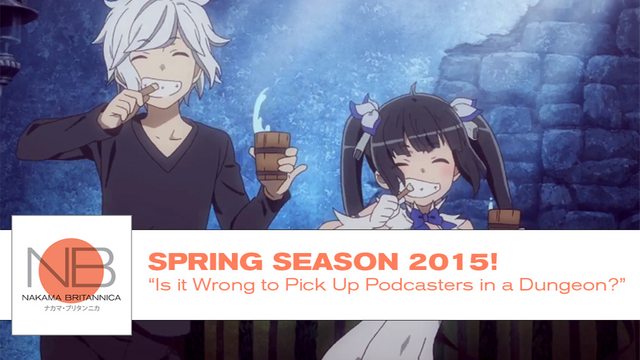 Join us for another exciting episode, in which we give our thoughts on what's airing this season ̶i̶n̶ ̶a̶ ̶r̶e̶m̶a̶r̶k̶a̶b̶l̶y̶ ̶s̶i̶m̶i̶l̶a̶r̶ ̶w̶a̶y̶ ̶t̶o̶ ̶A̶N̶N̶ in a way that is totally unique and has never been thought of before, ever.

We're trying to increase forum/podcast interaction as best we can, so please leave us a comment below and let us know what you think about the state of the season so far and how insensed you are that we didn't discuss Triage X.

We're also setting up a new, even more exciting stickied podcast feedback thread in which we want you to suggest us topics you'd like us to discuss, topics you'd like to come on and discuss with us and generally tell us what you think of the podcast in vague, emotional terms.

But that's not all!

Originally, we had intended to do an extra segment in which we would discuss a recent forum thread or two, but with the episode already running long, I had to cut it from the initial release. As it was still pretty entertaining, and it seemed a shame to leave it on the cutting room floor, however, I've set it up as a separate file, available from the link above, with itunes, youtube etc. to follow.

The plan was to discuss what anime we wanted to see remade, but in the end, we covered a diverse array of different topics including some, none or fewer of: The fate of Akito the Exiled, anime showing on tv, things ruined by inappropriate spoilers, whether Jonathan Clements is an unaging immortal vampire and, if they made an anime series based on your life, what it would be called.

It was nice to talk about something more recent and current for a change though actually. Also many thanks to Conan and Gol for joining us on the podcast! it was a lot more of a relaxed discussion for a change.

Just an ademdum to the podcast; Watch My Love Story.

You guys don't watch anime produced in the last ten years, you can't fool me.


ilmaestro said:
You guys don't watch anime produced in the last ten years, you can't fool me.
Click to expand...

The fact that KyoAni refuse to create Full Meal Panic Sigma is not on us.

ilmaestro said:
You guys don't watch anime produced in the last ten years, you can't fool me.
Click to expand...

The fact that KyoAni refuse to create Full Meal Panic Sigma is not on us.
Click to expand...

I'd be more happy with it not following the manga and just sticking to the source material entirely. But there we go.

Or even, Fumoffu 2 would be nice. There is enough there to make it.

Um. Maybe the itunes page could use a little revamp? Currently it just lists the podcast name in place of an album title and no-one as the group, it's literally 'unknown'. Like, maybe it would be a little more appealing to those outwith the site if it was labeled a little more descriptively? Like "Nakama Britannica Podcast" by "Anime UK News" or something? At least then it's obvious what you are and also potentially draws people to the site since you're making the association? Well that and upload an avatar of some kind for the main page, so it looks a little more professional?

That and maybe upload podcasts to Soundcloud too? It might give you more coverage, since Soundcloud is gaining popularity as a streaming site. Only downside is that a free membership limits you to three hours of content so you'd have to cycle out files but at least it would let you draw further attention to the podcast. Plus, your new fancy logo looks more professional and eye catching than most, so that allow will help to draw the eye if it's associated with whatever you're uploading.

I was kind of disappointed that no-one had seen Triage X though, how am I supposed to know if the fan service is up to snuff?

Interesting to hear about Kekkai Sensen though, it was completely off my radar until now, so I'll definitely need to look it out, if it's as good as was made out. Shame Funimation have stopped anyone in the UK from watching it. It's almost like they don't want to prevent piracy or something...


Lawrence said:
That and maybe upload podcasts to Soundcloud too?
Click to expand...

And Stitcher, maybe. Although I have no idea if anyone uses that.

As the self proclaimed Website Developer on the team, I'll field the sound-cloud question from an non authoritative stance;

Sound-cloud has a fast limit of 3 hours of music for non paying users with the price plans going to £3.99mo/£43yr for Six hours and some nice analytics's and comment control to £8mo/£75yr for unlimited hosting and extended analytics's

Unless we fielded some sort of donation drive to afford the hosting (I'd be happy to do some sort of telethon where we play anime games on Twitch or something), soundcloud would only be viable for about two or three episodes at any one time.

Stitcher's FAQ is broken and I don't even know how to submit to them.

ilmaestro said:
You guys don't watch anime produced in the last ten years, you can't fool me.
Click to expand...

The fact that KyoAni refuse to create Full Meal Panic Sigma is not on us.
Click to expand...

I'd be more happy with it not following the manga and just sticking to the source material entirely. But there we go.

Or even, Fumoffu 2 would be nice. There is enough there to make it.
Click to expand...

I only used Sigma as a way of saying "The rest of FMP".

If I was in charge I'd call it something like "The Final Assault" or something.

I still think it would be worth having at least the most recent episode up on Soundcloud tbh.

Fair points from all sides. The iTunes page certainly does need attention, but the keys are in chaos's hands and I haven't liked to bother him as I don't think he's on much these days. There's also the matter of why only the most recent eight or so episodes show up on iTunes, despite the fact that all the files are definitely still on the server. It's something I'll try and ask him about once we get the DDL problem resolved.

If soundcloud would make the show more accessible to folk, then I'm all for it, and I'm quite happy to see to the file rotation myself. I'm not against the idea of looking into a paid plan for storage at some point, but I'd like to hang back until we've definitely got a big enough following to justify asking them for cash.