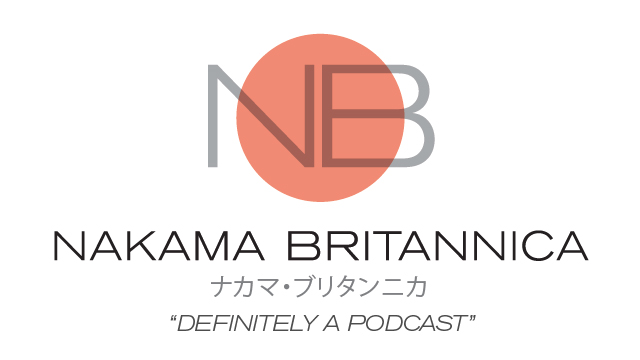 Rumours of our demise have been greatly exaggerated, so despite the best efforts of time and tide, Nakama Britannica is still the number one* podcast produced for these forums! *From a field of one.

Please leave us any thoughts, opinions and podcast-related feelings expressed through the medium of interpretive dance in this very thread! Or if you don't want to comment here, fire us an email to [email protected] tweet to @NakamaB_Podcast or like our facebook page here.

Following the recent hack trouble, only around half the past episodes are currently available - most through DDL via Mega, but a few are also hosted on youtube and I'll add a catalogue post listing links to all available episodes below.

Newest episode will always be most recent post at the bottom of this thread.
Last edited: 3 September 2016

Moderator
Reserved for catalogue of past episodes. 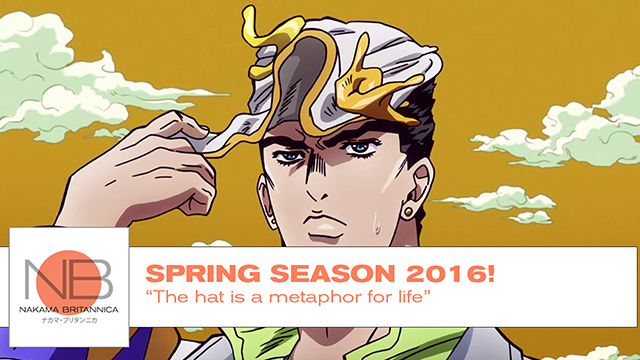 Like a group of fashionably late time-travellers, @Arbalest, @Y-San and @Myself pick over the bones of the spring season, discussing some, none or more of Kuma Miko, Flying Witch, Joker Game, Jojo's Bizarre Adventure: Diamond is Unbreakable, Re:Zero*, Ushio and Tora, Ace Attorney, Tanaka-kun is Always Listless, Haven't You Heard, I'm Sakamoto and Kiznaiver.

Yes spring has been over for a while now. We're making up for lost time.

*Our lawyers have asked us to make it clear that, for legal purposes, we have no opinions on Re:Zero whatsoever.

No iTunes for now, but DDL from Mega and hopefully a Youtube link in the near future.

We attempted to record this episode from Discord, which has unfortunately resulted in some dubious results relating to audio quality. Specifically, I sound like I'm stuck in the Matrix and despite best efforts to edit them out, we are occasionally interrupted by Discord notification noises. Rest assured that our usual moderate audio quality will be resumed from the next episode onwards.

When is that next episode? Sooner than you think....

I wanted to say that while I respectfully disagree with Re:Zero opinions, I can also say I agree regarding episode 4 because for me it is the very weakest episode and the one I spent the majority of my time playing with my phone instead of actively watching it all. I feel like what keeps me is simply the fact it's pretty good at hooking me with a cliffhanger week to week compared to the overall quality - I definitely think it'll fall to bits on a second watch once I know how everything works out.

Anyways general podcast thoughts now! The Discord notifications were fairly distracting because I kept thinking I had notifications of my own. XD I don't think the audio quality was too bad but I haven't listened before so I'll be interested to see how it sounds next time.

I'd definitely be happy to see it hit iTunes as I'm the type of person who tends to listen to podcasts in chunks and the problem with a straight MP3 download is that it gets counted as music, so if I move to listen to music for awhile I can't go back to the podcast and have it drop me straight back where I was. I might see if there is a way for me to get iTunes to consider this file a podcast instead, but yeah, in future I'm looking forward to it being on iTunes.

Future discussion idea - what would you guys consider the anime of the decade, considering you mentioned some people suggest Re:Zero is (which won't stick when it finishes airing tbh).

Moderator
I'm glad you enjoyed it! i know there wasn't much love for Flying Witch but it just didn't take me. I will definitely check into Re:Zero as things go on but for the time being, i do feel like i would much rather watch it, and more likely enjoy it when the hype dies down and the season has finished airing.

I think anime of the decade will be interesting, i'm not sure what i could really classify as such so i'd need to really dig deep and think about it, but yeah I would imagine we could more than happily discuss that idea! The only thing is, would we count that as decade from 2000-2010? if so, i think i have a good idea for some actually in that regard. 2011-2020 maybe not so much. 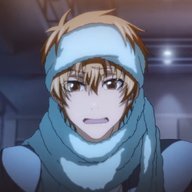 Arbalest said:
I think anime of the decade will be interesting, i'm not sure what i could really classify as such so i'd need to really dig deep and think about it, but yeah I would imagine we could more than happily discuss that idea! The only thing is, would we count that as decade from 2000-2010? if so, i think i have a good idea for some actually in that regard. 2011-2020 maybe not so much.
Click to expand...

2011-2020 would be interesting, but I think you'd struggle to come up with choices. Ignoring films, the only two candidates I'd personally push, even though I'm not either show's greatest fan, would be Hunter x Hunter (2011) and JoJo's Bizarre Adventure (2012). I think they're the two with the biggest potential to become all-time classics and both have a singular clear confident vision behind them, as well as their own style and flair. I don't think we've seen any other shows this decade that have been quite as bold and confident in their tone, vision and worldview. (That's not really a very good way of phrasing it. I have an idea of what I mean in my head, but I'm not describing it well.)

Perhaps taking this in a different direction, you could probably make a credible argument for Attack on Titan and maybe Love Live! being AOTD in terms of their clear widespread appeal and influence on other series and genres, but I haven't personally seen Love Live! and in the case of Attack on Titan parts of me thinks that in 20 years time, people will look back and wonder what all the fuss was about. Similar arguments could perhaps be made for Sword Art Online and ERASED, I suspect both of those will stick around in the public conscience for a while, though (like perhaps Re:ZERO) I'm not sure people will come back to them. If it's the show that most matches the advancements and temperament of the decade then perhaps an interesting argument could be made for certain readings of Durarara!! (though the first series was 2010, so it might not count), but I'm not sure whether most people would go for that or not. I feel like topics like this always end up involving a lot of conjuring. Looking back, I think it's easier to see what truly had lasting appeal from the early 2000s but I'd hate to guess what anime has lasting impact from this decade.

Interesting you touch on the intersection between popularity and critical value though, Buzz, because I was actually thinking, based on Demelza's points, whether a look back at the past decade would be better structured as a retrospective of the fandom as a whole (in theory, the episode(s) could then be marketed to fresh faces, who might, for example, not understand what the appeal of, say, Haruhi is or why it was a big deal, as well as also being a re-analysis of recent titles - How do we feel about it now the hype has died and we're all a little more cynical?).

I could sort of get behind HxH and JoJo as having a lasting legacy, though I wonder if the length and current lack of physical availability or lack of advertising (no-one is really pushing either brand, so the moment the anime ends, the hype dies down quite a bit, I think) might result in them slipping under the radar a little.

Also, you make an interesting point about animation potentially having merit outwith the usual hallmarks, to the point that it's still potentially noteworthy in its own right, but I wonder if it's too soon to really understand the effects of newer shows like Love Live or Attack on Titan, so that might be a tricky one?

Heck, this is the decade Pokemon came back into the fore during the XY saga and then lost everyone during the XYZ saga and it's awful handling of the Kalos Confrence only to charm a good deal back with a very strong start to the Sun Moon saga.

And then there's AOT

Oh god is there ever AoT.

For anyone not reading the other thread; would a Soundcloud or Podomatic upload be useful?

iTunes will be reinstated as soon as possible.

Moderator
Be it through rage infected monkeys, space radiation or ancient voodoo curses, Nakama Britannica has risen and will be streaming live from 2pm tomorrow (saturday 17th) on twitch at for a mid-season trip report on all the best* new shows! Downloadable podcast to follow.

*All views expressed are not those of Anime UK News and are probably trash, just like your waifu.

Moderator
A big thank you to everyone who joined us for the stream the other day (sorry if it was a bit overlong). The VOD will be available from the twitch page for now, but I'll get a downloadable podcast version ready soon as possible.

Moderator
At last, the completed Episode 25: A Slime Goblin With Bunny Ears in Italy.

Moderator
Trying hard to ignore the fact that it's already February, the 2018 Roundup stream is now available in podcast form!