MGS4 has been announed for a simultaneous worldwide release (thats including Europe, America, Asia, Japan and other areas i may have forgoten to list).
the game shall hit shelves on June 12th!! 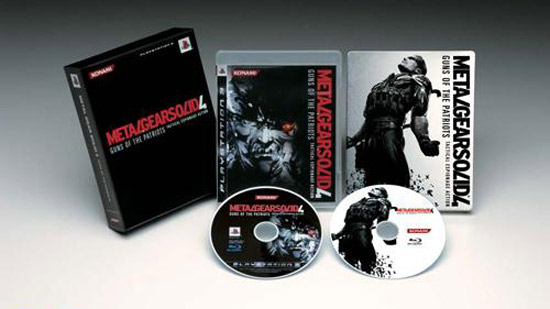 (here is the boxart that was included with the press release.)

apparently the game has a pre-order campaign planned. which apparently starts in April. but since that was from the US press release, i wont include it here since im not sure weather Europe will be getting the same pre-order goodies.
but if your curious check it out here
im still happy that the game has a confirmed release date, espeically for the summer holidays....you know what that means, non-stop metal gear.

However one thing i am still angry at is the fact that so far Europe will NOT be getting the upcomming MGS4+PS3 bundle which is so far for only North America and it consists of the following:
- 80GB PS3
- better backwards compatability
- MGS4
- Dual shock 3 controller (which has the rumble feature)

(all the goodness of the PS3 in one box!)

This is a bundle that everyone who wants to get a ps3 has been holding out for (like me)...and its no suprise. yet Sony of europe has no plans to release it, instead today they announed two different bundles for Europe. neither of which are 80 gb, dual shock 3, or backwards compatable or most importantly...have MGS4 with it

if Sony knows what they are doing then i think that the 2 new bundles are used to sell the remaining huge stock within europe. and if it proves successful then the MGS4 bundle may be announced in the comming months as this would also give time for Europe for the upcomming release of Dual Shock 3.....(this is what i hope/dream will happen)
L

Seriously... fixing backward compatability on ONE of the different sized harddrives is pathetic. I meen... the 20gb system can play ps2 games, but the 40gb one cant... how stupid!
Z

To me, a lack of backwards compatibility is hardly a a negative aspect of the console, because I buy a PS3 to play PS3 games.

I would take a guess that some shops would do their own bundles on the release of MGS4 over here in Europe seeing as they know its a big release themselves.
N

its a no brainer that shops will have their own bundle with mgs4. but they can put a high price on it.
the fact that the MGS4 bundle announced for NA is an official Sony release and has the extras such as DS3, and MGS4 gives a saving to the customer and an incentive for us to actually purchase the system.
Z

Ninja Boy! said:
its a no brainer that shops will have their own bundle with mgs4. but they can put a high price on it.
the fact that the MGS4 bundle announced for NA is an official Sony release and has the extras such as DS3, and MGS4 gives a saving to the customer and an incentive for us to actually purchase the system.
Click to expand...

Well I got a pretty good bundle there 2 weeks ago.

To buy a PS3 on its own over here costs â‚¬400, so I have to say it was at a very competitive price.
N

that is a good deal i must say!
S

Well at least we have a release date and as you said, it'll be summer holidays, NON STOP MGS!! W00tT.

Now to hope I dont have to revise for exams over the holidays....
C

OMG, OMG, OMG, OMG! It's happening, at last! MGS4 is coming out! Yay! I'm really, really happy at this news because MGS is second only to Final Fantasy for me!

I sure do hope we get that MGS4 bundle over here, as the PS3 is as good as sold to me if that happens.
A

I'll probably pick up the movie bundle, planning to get one anyway just to play blu ray dvds, dont really care about any ps3 games atm (other than little big planet) as i have a 360 for most of my needs.. But you never know if that MGS4 bundle came out i wouldnt mind picking it up.


Whilst i was talking to my brother about these packs it seems sony is still giving europe the middle finger in terms of console packages..
M

My brothers already got a PS3, so I'm going to pre-order this straight away... I mean, you get the MGO online beta =D

And also, I hope the villains are just as good as the first one. And oh yeah, Vamp <333
S

Vamp owned!! And we have a ps3, so we're gonna be pre-ordering tooooo
N

lol, i pre-ordered this the day the release date was announced via the GAME website, despite the fact i dont own a PS3 yet.
but i am hoping that this bundle will hit the UK soon, or a similair bundle still.

i e-mailed Sony of Europe day before yesterday regarding this subject, so i'm just waiting for a reply.