hi! anyone going to the expo on july 20th? still a bit early i suppose, but it's nice to get to know some of you before the date arrives. perhaps even make some new friends (i doubt though because i'm awkward as heck).

any cosplayers going? i'll be going as homura akemi from puella magi madoka magica and with a few friends who are going as eponine from les mis and fem!mario and fem!luigi (series is obvious)!

excited to hear from you guys!

I've been the past 2 years (so to every single one held in Manchester so far haha) so of course I will be going again, even if they end up having naff guests like they did for the first one.
I'm hoping they don't disappoint and have guests like last years though. I've opted to get an early bird ticket this time as I have now learnt from that mistake! The first one I was in line for about 20 minutes when I got there around lunch time, last year i was waiting for about 90 minutes when I got there at about 11am and the queue went all the way out of the Manchester Central area right by Great Northern. INSANE.

I will not be Cosplaying though. Might wear my Pikachu hoodie though...if my bf will be seen with me in it lol.

Have you been to any of the previous ones, ayanami?
A

ah yeah manchester isn't renowned for the super famous guests since it's only small, but they're improving since more people are attending! i just hope they don't have to resort to asking footballers to come in as a filler for guest spots again haha ; v ;
last year's were okay, but tbh i only recognised vic mignogna and warwick davis but even then i wasn't prepared to pay to get autographs off them. and yes! i'm very glad i bought early bird tickets prior to the con last year because although the line was long, it moved pretty quickly and wasn't quite as severe as the queue later on in the day! poor you, at least it was a nice day.

pikachu hoodies are cute, just convince your boyfriend more!! i may recognise you on the day

and yes, last year's! it was my first ever convention and it was so much fun, i'm very glad i went! didn't cosplay last year though, so this is my first time cosplaying too ~

I hope they take advantage of all the space they have a lot better this year as there was loads more space last year than the year before yet all they did for it was leave it empty so people could doss about/sit down there.

I saw Vic in March last year too in Birmingham where I got a CD and poster signed by him and at the Manc one I got my DVD signed. My friend and I managed to catch him before his queue break but as he left the booth so we didnt have to pay nor queue to get our stuff signed. Was very lucky! I missed his panel though in Manchester

I think he'll let me wear my hoodie seeing as it's either that, or me making him dress up like Ash! mwahahaha.

I'm out for a friends birthday the month before, we're all going out around Manchester for drinks and stuff and he's made it game/anime themed so I'm "being" Pikachu for that two as regardless of what theme it ends up, Pikachu hits em both! tee hee

If I can make sure my manager knows I'm not available on the 20th tomorrow, I will be saying (in the words of Daniel Bryan)...

Not been for the last 2 years, so I'll be hoping to make a change of that and add another signature to an on-going poster (which I have left on it's own for a while...) I'll be scraping my wallet for more money, but I'll be attending it - if nothing else. And to be honest, the only person I know as Special guests is Warwick Davis. lol.
Not a cosplayer as of yet, who knows in the future I may.

And yes, early tickets are (pretty much) essential to conventions. You will miss any great deals to the early birds, and I would actually walk around when I was there before "official" opening times. You can snap them up, check the schedule and plan when you want to have food/drink before you enter the masses and listen to talks or the Robot Wars events etc. in between it all. Heck, if desperate enough, draw something outside the halls if there's no spaces to sit, and then enter the comic comps if you want to.

Either way, I'm hoping to go there for the hell of it and have fun absorbing the excitement. 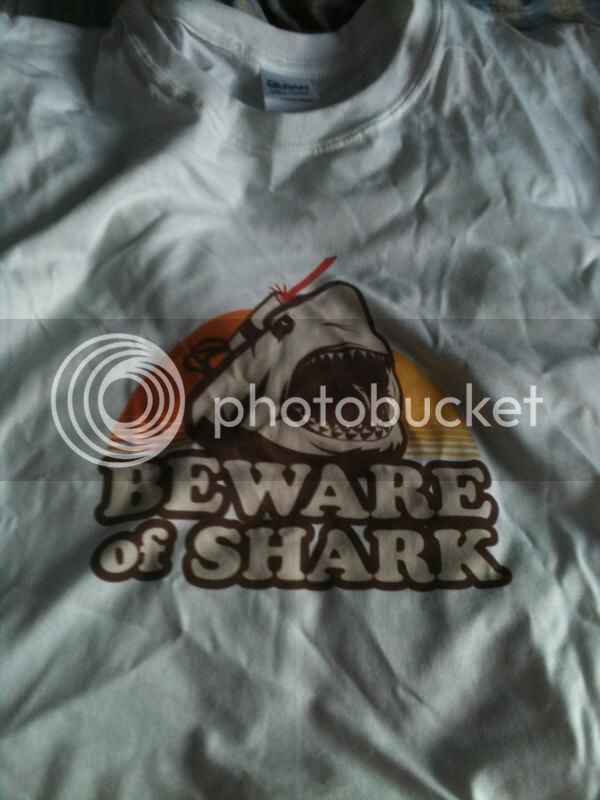 This is the new shirt I got recently which I will be giving its first outing at Comic Con, so if you see a guy wearing this shirt with a pair of prescription sunglasses perched on head and a shabby Diadora bag...it's probably me! So jump in my face if you see me! I'll pretend to not be really shy and nervy for a minute at least!
C

I'll be sporting a dark green Black Lagoon t-shirt with "Kill 'em all, Baby!" on the front, with blue jeans washed lighter at the top, going darker downwards. Otherwise, look for the Ikki Tousen messenger bag.

Hope to catch y'all there!
C

Update post:
Oh ho ho ho ho - what a fun day! (both sarcastically and none). Just got back around 6pm and I am knackered.
I'll get the awkward parts out of the way and finish lightly:

1 - As I had said, Early Entry was essential, and even that had me trekking the outer-side of the building twice in over 30mins+.
2 - Turned out that waiting for Warwick's signature led us to originally a snaked line just outside the toilets... Lots of awkward shuffling. But the disaster hit when the poor guy walked to the desk, the que took one look and most flipped around 180 degrees and it became a crowd, rather than a que. And on the other side, a load on que cutters. There just wasn't enough staff members at the right place at the right time, and with the numbers there - it would have still been difficult to maintain. That didn't stop the lady next to me, and she came down with an iron fist (and respectfully so).
3 - I do what I do best, and I spend 20mins worrying about nothing - Thought I'd lost my wallet after paying within Comic Village. There was some nudging, so I feared it was stolen from an opened pocket. Thus, I asked around, checked my bags and reported it to the front desk... Only to come back with a final check in my bags, and my wallet was right down in the crevasse of my bag's outer pocket. /)(-_-)

4 - I snapped up some nice deals and blew all my money I had on me (I think the total, including travel and ticket) was almost £200!! Mainly started with a nice massage, lots of posters/cards, 3 DVD cases and some random merch. I'll post this in the "What did I buy today?" thread.
5 - I am glad that I eventually stuck it out with getting to Warwick. The man's very impressionable positively, I've already started reading about him with the book I bought, and not only did he sign the book, he's nice enough to sign my "Representing AUKN" poster and complement it. I was chuffed.
6 - That wasn't the only sense of admiration I received about my drawings. I went outside for a late lunch, so thought I'd enter the contest. Lovely weather, low wind and the plan I had was set out. Drew one of my OCs performing a rock concert (with no band!) XD Had 2 people come up and praise my drawing, and that really make me feel good when I do it just for entertainment - mine and others. I stuck my details on the back of the pic and plonked it into the entries' box. If I win, it's a bonus - otherwise, I'm just happy I got to draw it and hopefully surprise someone.
7 - I got 2 "Free Hugs." ^_^

I did look out for people, but to no avail. Sorry peeps.

So glad I got the early bird ticket. I had all my shopping done by 11am! I spent £70 but I'll post in the other thread on what. After my shopping I chilled outside till 12pm where I then went for lunch at Pizza Express. Came back after but didn't dare to go in as I kept hearing how rammed it was. Based on the general entry queue and how rammed it was with just us early birds, it sure made sense. I can see why they're making it 2 days next year! So we just hung outside for about an hour looking at the cosplayers then went home and caught the end of the Tour De France haha.

I'm getting an early bird all the time now. So much better

There were even less stalls this year which made me sad, I didn't bother queueing for anyone and with the state and size of the queues I'm glad I didn't. They need to get as organised with their space as the Brum one last year, that was fancy
I never got to go to the back where the robots live and I guess the stage for panels and the masquerade was?
I'm going to make sure I have enough energy for the masquerade next year as I've still never been to/seen one.