Mary and the Witch’s Flower Reportedly Opening May 2018

Earlier this month, Altitude Films released the first English dubbed trailer for Mary and the Witch’s Flower, the first anime film from Studio Ponoc, directed by the Academy Award-nominated Studio Ghibli alumni Hiromasa Yonebayashi (When Marnie Was There). Now, Launching Films has seemingly confirmed a 18 May, 2018 UK theatrical release for the film.


It is Tib the black cat who leads Mary to the strange flower in the woods. When she discovers a little broomstick shortly afterwards, she is astonished to feel it jump in to action. Before she can gather her wits, it is whisking her over the treetops, above the clouds, and in to the grounds of Endor College, where: ‘All Examinations Coached for by A Competent Staff of Fully-Qualified Witches.’
​
Source: AnimeNewsNetwork. Sad to see such a gap between the US run of the film (Jan 19th) to ours.

The release date sucks but I'm still looking forward to watching it.

Lambadelta said:
Sad to see such a gap between the US run of the film (Jan 19th) to ours.
Click to expand...

The Aussies also get it in January according to the Madman trailer!

AUKN Staff
To be honest, I think the later release date is quite clever. I'm sad the thumbs up emoji disappeared, I no longer have a way to express a general sense of satisfaction rather than the smiley face, which is just a bit too happy for my liking.

Joshawott said:
To be honest, I think the later release date is quite clever.

the release date is one week before half term. It's usually last week of May for many schools.

crashmatt said:
the release date is one week before half term. It's usually last week of May for many schools.
Click to expand...

I knew it was either a week before or after; just couldn't remember which (ever since I left school, knowledge of term times has left my head ). Noo gutted If that's the case, I've been expecting a January release like Australia/America given that Altitude Films, an English company, were distributing it.

Joshawott said:
The UK date is one week after half-term. Having it in the week itself would have been better, but they could be targeting that general market.
Click to expand...

Good. I'll read spoilers after the release in the rest of the English speaking world and then loudly spoil it for any children watching it during my nearest screening.

Ferensviel said:
Noo gutted If that's the case, I've been expecting a January release like Australia/America given that Altitude Films, an English company, were distributing it.
Click to expand...

Anime Limited should have a monopoly on UK theatrical anime. If there's one thing they manage to get right more than anyone else, it's UK theatrical releases of anime.

Not trying to rub it in at all (sorry!), but I just ordered my Fathom Event tickets online to see Mary and the Witch's Flower over here in the US, exactly two weeks from today at my local movie theater. Unfortunately, a couple friends are going with me who don't do well with reading subtitles, so I had to order tickets for the English dub showing. If I was going by myself I would have gone to the subtitled original language showing. But, at least the dub is an actual "English" dub...

I hope there's a nice UK CE release for this eventually - keeping my fingers crossed! I do already have the JP UHD/BD Limited Edition box set on pre-order, which releases on March 20th - so I'll have that in my hands on the 21st. It does include English subtitles: 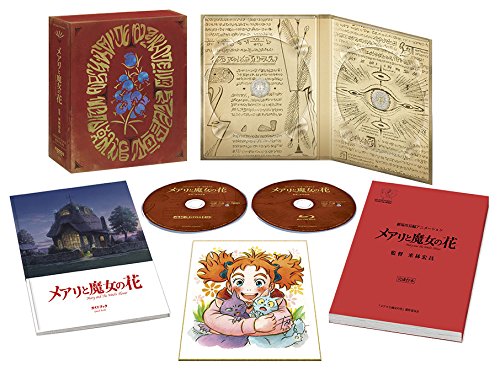 It's being distributed by Altitude Films and this is their only anime. Looking through their catalogue on Amazon there isn't any special editions, etc of any of their live action stuff.
What are GKids like with stuff like this?
We might have to rely on Madman!

The quality of GKids releases are pretty good, on par or better than the Disney Ghibli releases in the US - a few of the GKids Studio Ghibli titles were actually improvements over Disney, as they corrected dubtitle and video issues. The main drawback is, you only get a standard release in a Blu-ray keepcase with a stupid o-card slip, which I dislike with a passion - that is why I specifically buy so many UK releases in general, for their chipboard boxes and digipaks.
Last edited: 6 January 2018

I was being keen and asked Altitude if they had any plans for a collectors edition, and they actually replied (Haven't in the past when I asked them anything about UK premier dates), and their response looks promising/positive at least Cool - I love to at least triple-dip on everything anime, lol...