Lupin the IIIrd: Fujiko Mine's Lie Anime Film Opens In Japan This May

AUKN Staff
From the director of Redline, Lupin the IIIrd: Fujiko Mine's Lie returns viewers to the gritty, stylistic world of the acclaimed 2012 series "The Woman Called Fujiko Mine" when it opens in Japan this May!

I'm still not sure I approve of this very non-standard use of both Roman numerals and English.

neither Jigen’s Gravestone or Goemon Ishikawa’s Spray of Blood have seen release in the United Kingdom
Click to expand...

Would be nice to see them all, but who knows given Funi's recent licensing shenanigans.

ayase said:
I'm still not sure I approve of this very non-standard use of both Roman numerals and English.
Click to expand...

The branding of the franchise is an absolute enigmatic mess to be honest. Like, they couldn't even be consistent with using Roman numerals or Hindu-Arabic numbers with Part IV and Part 5.

Would be nice to see them all, but who knows given Funi's recent licensing shenanigans.
Click to expand...

Well, Jigen's Gravestone was licensed by Discotek in North America, who seem to have the keys to Lupin the Third as a whole now. Goemon Ishikawa's Spray of Blood has yet to be released there, however.

It's particularly odd since until now it's almost always been the entirely correct Lupin III or Lupin the 3rd, because as a name it would be pronounced exactly the same. The odd combination of the two sort of short circuits my brain a bit and makes me imagine they're capital "I"s rather than numerals and it should be pronounced Lupin the EEEEEErd. I guess he does have ears.

I mean Japan does do all sorts of slightly wacky things with their own interpretations of English and most of the time it's quite endearing - Things like Natsumi Tsujimoto from You're Under Arrest having "Natumi" on the side of her scooter and Masamune Shirow spelling the name of the main character of Appleseed as "Dunan Nut".

My favourite attempted use of English though is of course the name of Gundam ZZ character Elpeo Ple, a reference to a magazine referred to as "L-People" and was meant to be pronounced the same... However not only does Japanese not have an "L" sound (nor as far as I'm aware can a word end with a consonant sound other than "n") but it's far from obvious to anyone whose first language is English that the written text "ple" when separated out on its own should be pronounced like the second syllable of the word "people" - Like "pull" with a near-silent "u" rather than what 99.8% of people would presume upon seeing it, that it should sound like "plea" or "pleh". This led even official material to transcribe her name in three different ways as Ple (how it's spelled) Pull (closest to how it should sound in English) and Puru (how it sounds in Japanese). Cue 20 years of confusion.
Last edited: 7 March 2019

Moderator
It could be worse. 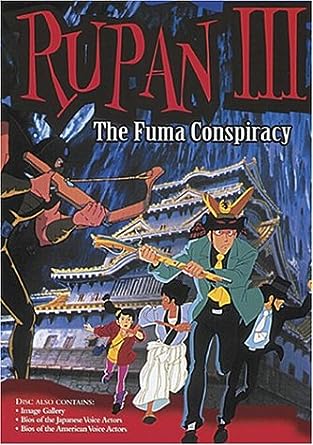 G
“Memoirs of a Murderer” Director Yu Irie to appear at the Japan Foundation Touring Film...