AUKN Staff
Last year anime and visual novel fans were pleased to hear one of the most popular Key visual novels Clannad would receive an English release through Sekai Project and Kickstarter. Now the fans can rejoice even more as more Key titles have been announced for official English translated releases! 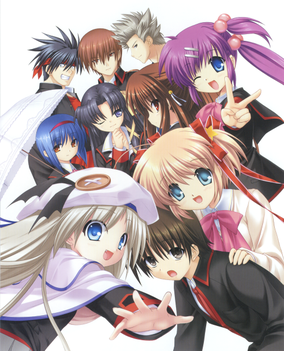 The titles that VisualArts have announced on their Facebook page are Little Busters! and Tomoyo After ~It's a Wonderful Life~. Little Busters! is an all-ages visual novel that spawned spin-offs including an eroge version, and Tomoyo After ~It's a Wonderful Life~, is an eroge spin-off to the all ages Clannad visual novel that focuses on the character of Tomoyo, one of the female love interests in the main Clannad story.

VisualArts have clarified that they will be using the fan-translations with some parts to be modified and re-translated. As a result of this, all fan-releases will be removed to help support the official release.

Tomoyo After ~It's a Wonderful Life~ was released in 2005 as the only title in the Clannad series to feature eroge content. The game was released on PC with an all-ages version available followed by releases on consoles and portable devices including the PlayStation 3 and Xbox 360. The spin-off has yet to receive an anime adaptation but the main series has received two anime seasons and a movie adaptation (titled Clannad, Clannad ~After Story~ and Clannad: The Motion Picture). The anime seasons have been released on DVD by Manga Entertainment UK while both seasons and the movie have been released by Sentai Filmworks in North America with the main seasons given a Blu-ray release.

Riki was a child when his parents died, leaving him hopeless and depressed. What saved him was a group of four kids calling themselves the Little Busters. They took Riki out and played with him during his time of need. He really enjoyed being together with them, and his grief gradually faded away. Now in his second year of high school they still hang out, fight and live together, and enjoy their school life.

Tomoyo After ~It's a Wonderful Life~ Plot Synposis (courtesy of VNDB):

Tomoyo After's story revolves around Okazaki Tomoya and Sakagami Tomoyo. Tomoya has graduated from high school and is now employed as a garbage collector. He and Tomoyo are now seeing each other in a romantic relationship, though Tomoya lives alone in his apartment. One day it is discovered that Tomoyo has a younger half-sister named Mishima Tomo who had been living with her mother, but was recently abandoned. It is eventually decided that Tomo will live in Tomoya's apartment for the time being.

Beside the Adventure part that makes most of the game, Tomoyo After also has RPG elements. In order to complete the game entirely, the player must finish eight of the mini RPGs games called "Dungeons & Takafumis" which are available during certain scenarios as the player continues to play the game.
Click to expand...