When you think of “Monster Girls”, your mind may be drawn to the buxom, bodacious cast of Okayado’s Monster Musume or Kenkou Cross’ Monster Girl Encyclopedia – titles that, while having their own merits, haven’t exactly helped the genre’s reputation as a fetishist interest. There’s plenty of room to explore broader ideas and stories however, with Kei Murayama’s A Centaur’s Life attempting a more rational exploration of how monster people might integrate into society (albeit a bit too forcefully). Ironically however, I feel as though the series that best portrays the inevitable struggle of demi-humans is the one that places the most emphasis on their humanity: Interviews with Monster Girls, a slice-of-life comedy by Petos.

The series’s set-up is simple: Tetsuo Takahashi is a high school biology teacher with a particular interest in “demi-humans” (humans who develop particular characteristics not unlike those seen in mythology). Not long after lamenting his inability to meet a demi-human in the first volume’s opening pages, impeccable comic timing kicks in and he quickly finds himself in the presence of not one “demi” but four: the hyperactive vampire Hikari, shy dullahan Kyōko and the timid snow woman Yuki amongst the student body, with anxious succubus Satō appointed the new maths teacher. With them agreeing to being interviewed for Takahashi’s research, what follows are glimpses into the everyday lives and troubles of those trying to adapt and fit into society.

Interviews with Monster Girls‘ greatest strength however, comes from allowing them to just be “girls” first, with the “monster” part largely being a fancy dressing for worries more relatable to us human readers; something outright observed by Takahashi. We don’t need to be a dullahan to sympathise with Machi’s worrying about her appearance’s impact on her love life, or a snow human to understand Yuki’s fears of being treated differently because of who she is. One way or another, most of us have our own characteristics that make us feel the same way. As someone living with an autistic spectrum disorder, this really resonated with me. I regularly worry about how my condition will affect my ability to socialise and date, or whether the way I’m treated is because of, or in spite of it. 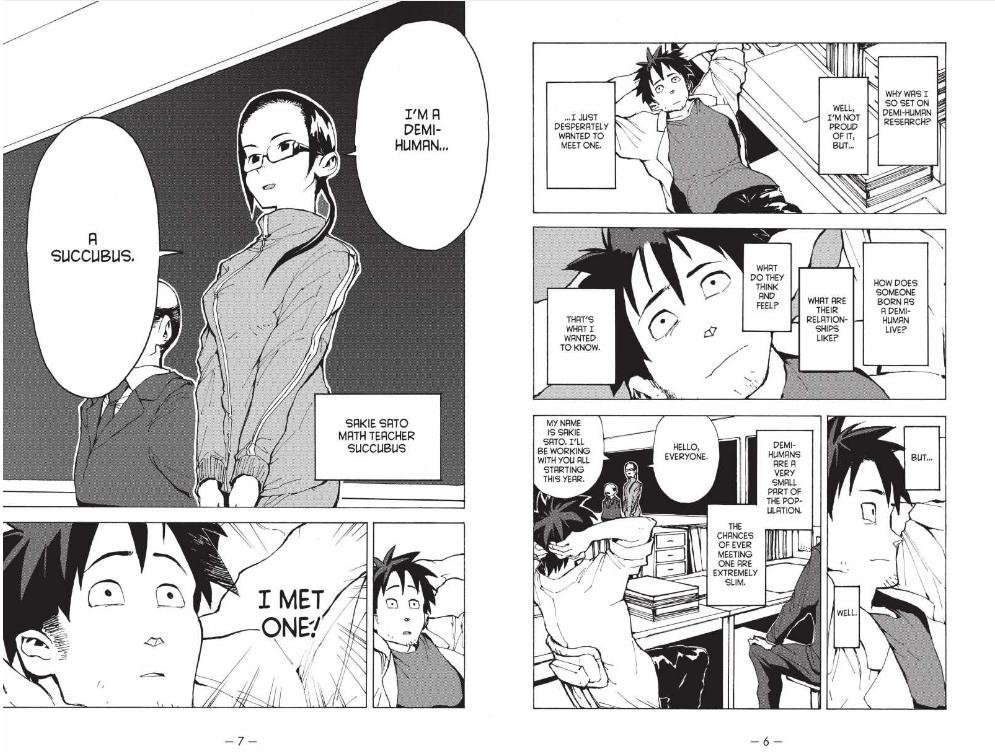 Interviews with Monster Girls never forgets its fantastical premise however, exploiting it for both dramatic and comedic benefit. If you ever realised how sexual traditional vampire lore can be, best not point it out when you’re a teacher with a vampire student! Also, have you ever wondered what would happen if you tickled a dullahan’s body while their head is in the arms of their crush? If so, this series has plenty of moments you’ll love.

Like her name ironically suggests, vampire Hikari is the series’s shining, radiant light. Loud, cheerful and mischievous, she’s the driving force of joy that viewers and characters alike find themselves drawn to and following her escapades is an absolute delight. Starring opposite, Takahashi is an endearing gentle giant who quickly establishes himself as a caring mentor and confidant for the demi students, but it’s refreshing to see even a character as idolised as he is having his own flaws, even if they’re played for laughs more than the others’ (like becoming flustered when a girl’s chest presses against his during an innocent hug).

Like a lot of popular slice-of-life comedy manga, a lot of Interviews with Monster Girls‘ humour is drawn from my preferred method – the interactions of its characters in situations that, for the most part, may not have been particularly engaging on their own. There are moments of punchier, more direct comedy though, like a four-panel strip between chapters where Hikari is asked to verify bits of classic vampire lore (aversion to garlic etc), with the answers becoming increasingly absurd. I feel the stale format of written reviews rarely do comedy justice – especially as aside from retorts accompanied by eye-rolling from my thirteen year old brother, I’m no comedian – but just trust me when I say the comedy works – it made me laugh after all! 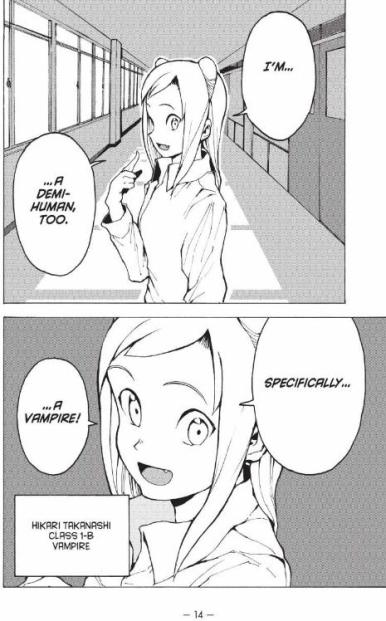 While I have already been spoilt by the smoother, more refined visuals of A-1 Pictures’ anime adaptation, journeying into the source material wasn’t quite the visual downgrade I was expecting. Even without her energetic motions and sweetly enthusiastic voice, Petos draws Hikari with an abundant expressiveness that makes me forget I’m reading a static manga. On the flip side however, while Takahashi was known for his varied facial expressions when the anime adaptation broadcast earlier this year, he has a perpetual “derp” face, leaving him looking spaced out most of the time.
Whether you were introduced to the demis with this year’s anime, or this review is your first introduction, there’s plenty to take in and enjoy here; I was left in eager anticipation of subsequent volumes (of which five have currently been published in English). If you’re interested, you can read the first chapter for free on Kodansha’s official website.

The monster girl sub-genre may owe its recent popularity to more sexually suggestive and visually eccentric titles, but I’m loving how this resurgence is already being met with such creative growth and diversity – of which this series is more than a noteworthy example. While Monster Musume is known for eccentric designs like Miia’s snake tail and Suu’s slime body, Interviews with Monster Girls‘ demis thus far (bar Machi) wouldn’t even be recognisable as monster girls at first glance – which as mentioned earlier, is this series’ greatest strength. For a manga so concerned with the supernatural, Interviews with Monster Girls is awfully human.

If I Could Reach You Volume 1 Review