In This Corner of the World Review

It’s the 1930s on the outskirts of Hiroshima, and Suzu is an ordinary girl who loves to daydream and draw sketches of anything from landscapes to the fantasy stories she creates for her younger sister. As she turns 18, her parents arrange a marriage to a man named Shusaku Hojo and so Suzu moves to live with him and his family in the neighbouring town of Kuze, just as Japan enters World War II. As the country suffers the hardships of war, Suzu is forced to live a new life, with a new family, in a new town and face new challenges, leaving her dream-like existence that came before.

Animated films based upon World War II are not unheard of, in fact Studio Ghibli’s Grave of the Fireflies is noted for being one of the most famous war films of all time, and the same studio would revisit the war for 2013’s The Wind Rises. It’s not just Studio Ghibli, however; there’s Barefoot Gen that was released back in 1983, even the acclaimed Akira largely drew inspiration from events during WWII, and if you wanted to look outside film, there’s the web-series Hetalia: Axis Powers that largely draws comedy from the politics of that time period. In This Corner of the World however, despite being set during the same time period, feels very different from most war films. It’s not out to draw a specific emotion out of the audience like Grave of the Fireflies, or show the action and brutality of war as some Western films may strive to do; instead In This Corner of the World seems to show the mundane side of war. Perhaps that’s not the correct word; there’s nothing ‘mundane’ about war, especially ones as unforgiving and history-defining as World War II, but instead of being set on the front lines, we’re instead following the daily life of one girl who grows up in the time of war. She’s no one special, in the grand scheme of things she has no influence in said war, she’s just a survivor going about her daily business, but that, in a nutshell, is the main beauty of the film. 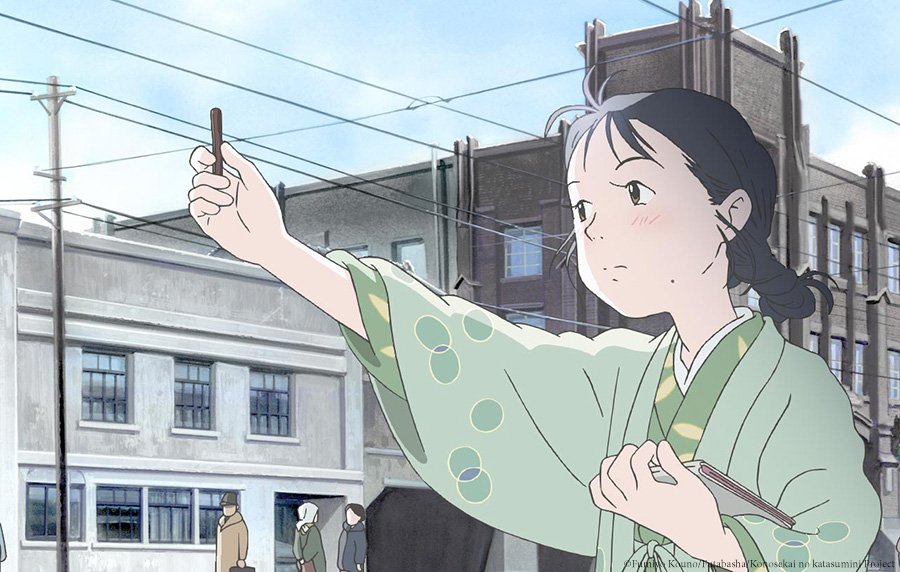 At the start of the movie, Suzu’s a daydreamer with little or no thought of what awaits her outside of school and home life, then all of a sudden, she’s forced to leave the only home she’s ever known to move in with a complete stranger, marry him and take care of the whole family just as the country falls into war and life becomes incredibly hard for everyone. Even if the war didn’t happen, the thought of leaving everything you’ve ever known is difficult enough, but during the course of the movie we slowly see Suzu evolving into a courageous woman who manages to make the most out of the little she has to live on. Seeing her forming relationships with complete strangers in the heart of a situation where you’d want to be with those closest to you makes for a very touching experience. By the end of the film, she’s a fully realised character with wants, needs and flaws, as is the family that she’s come to know and love. There’s a scene where Suzu is accidentally accused of espionage, simply for drawing the warships that she can see from her house. It starts out as a very dark turn of events with the family fearing for her life, but then, when the soldiers are gone, the family unexpectedly burst into laughter, because the thought of Suzu being a spy is the funniest thing in the world to them, and in turn to the audience, because she’s such an airhead half the time. The balance between the harshness of war and the warmth of family coming together are the strongest aspects of this movie, and there are many little moments like that, that shine through.

Alongside Suzu’s self-development there’s also a heart-warming tale of her growing relationship with her husband Shusaku. Arranged marriages were common in Japan at the time, with marrying for love being not as important as supporting and providing for families, however normally in movies when arrange marriages occur, they’re not always painted in the best light. This is especially true for American/British films where arranged marriages are more rare in today’s society, so it’s often used as a tool to cause drama rather than paint a proper marriage. In fact, halfway through the film I mistakenly thought that In this Corner of the World was going to take us that way, with Suzu’s childhood male friend coming back into the picture and her admitting feelings for him, but it doesn’t. They talk, they express pent-up emotions, and then he leaves. It’s a natural development and feels like a scene that needed to happen, otherwise the emotional pay-off between Suzu and Shusaku wouldn’t have meant as much. The pair start off awkwardly as expected but the little moments and stolen kisses here and there are enough to paint a realistic, simple but overall sweet marriage where the pair work together in the most horrific of circumstances.

Due to the nature of the film being a guided tour of Suzu’s life before and after the war, the film takes a lot of time jumps, especially in the opening scenes where we see her as a child then swiftly jump from year to year until she’s 18 and ready to be married. After that the pace slows down considerably from months to weeks to days at a time where we follow her daily struggles at the time of war, snapshots based on real-life events and bombings that affected the country. It’s easy to grasp the point of this framing device, and the middle part of the movie when it’s focused on the moment-to-moment survival is when the film is at its strongest, but the time-skip is a double-edged sword that the film doesn’t avoid cutting itself on. Since the jumps occur erratically, there’s no sense of a typical 3-act structure, so the film just starts and then ends when it feels like it’s ready to. There are dips and rises of emotions that come naturally with the subject matter, and help the audience to stay tuned to what’s happening, but there’s no way to grasp when and where the film will end, due to the time skips happening unexpectedly. The opening scenes especially, where the skips cover the most time, feel the most hollow as we barely get to know Suzu in her early years outside of her love for drawing and the first meeting with the men that come and go in her life. Then there’s the ending when the film seems poised for the perfect finish, even quoting the actual title of the movie, it all-of-a-sudden throws us right into the middle of a bombing sequence; buildings burning down, a child quickly made an orphan as she cradles the remains of her mum, then walking around homeless until she abruptly crosses paths with our heroine, where the film ends with her apparently filling a hole in the family unit that wasn’t mentioned or felt before. The whole scene is in stark contrast with the rest of the film because it’s tonally so different. Yes, bombs go off during the movie but it’s always focused on the emotional effect on the characters, not the destructive carnage. It feels like they chopped up a few clips from Grave of the Fireflies and slapped them onto the end, which is such a shame as there was already a good ending to work with, and what time was left should have been to allow the final emotional beats to breathe more and sink in before the credits roll. 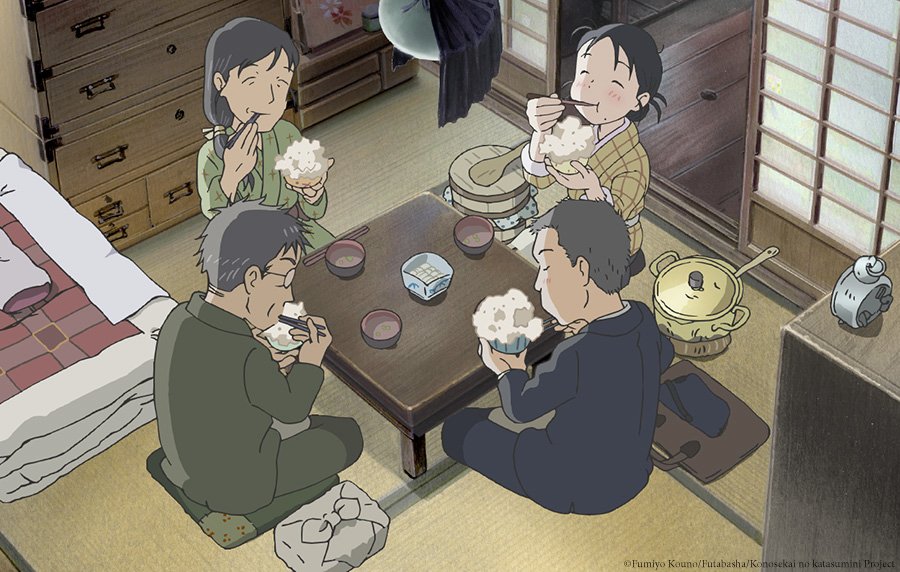 Japanese and English dubs are provided for the release, and I’m afraid on this occasion I’d highly advise you go for the original language when first experiencing the movie. Whilst it goes without saying that it’s best to experience such an emotional Japanese story authentically via it’s natural language, the reason for my recommendation is due to two factors, the first being the subtitles. There are several instances when it randomly subtitles several a capella songs that have been translated into English for the dub but then doesn’t provide lyrics for the untranslated songs. The other is the performances themselves; there are some veteran actors in the dub including Todd Haberkorn and Barbara Goodson, who sound fine, but the weakest links sadly lie with the casting of the more prominent characters. Laura Post is relatively new in the voice actor circuit, and sadly doesn’t always give the breath of emotion that Suzu needs, especially in the latter half of the film, likewise, with Jason Palmer as the childhood friend Tetsu; both feel too detached from their characters to truly pull it off. There’s a few instances of unmatched lip flaps that are distracting too, so go with the Japanese dub which contains far more impressive performances from the likes of Daisuke Ono and Rena Nonen in the main roles.

In regards to the soundtrack, I must apologise to Kotringo as I mistook her soft vocals for Aoi Teshima (whom she sounds very similar to admittedly) however Kotringo doesn’t just provide the songs but also the whole score. Full of lush pianos and soft melodies, her work accompanies the film perfectly; I hope to hear more of her work in feature films in the future.

In this Corner of the World comes in 3 editions: double play, DVD only and collector’s edition Blu-ray – the latter comes in a collector’s box with art cards, bonus 12-page booklets plus an extra DVD with bonus features including interviews with director Sunao Katabuchi and producer Masao Maruyama, plus a ‘Then and Now’ Featurette which takes a look at the two main locations of the film – Hiroshima and Kuze – and compares the animated recreations with how they look today.

Suzu’s story is overall a well-told, heart-felt journey that may not be as lauded when compared to other animated war films, or as fondly praised a few years from now as it’s been released the same year as several other big animated darlings (such as Your Name and A Silent Voice), but In This Corner of the World is still a tale worthy of being discovered and added to your collection. 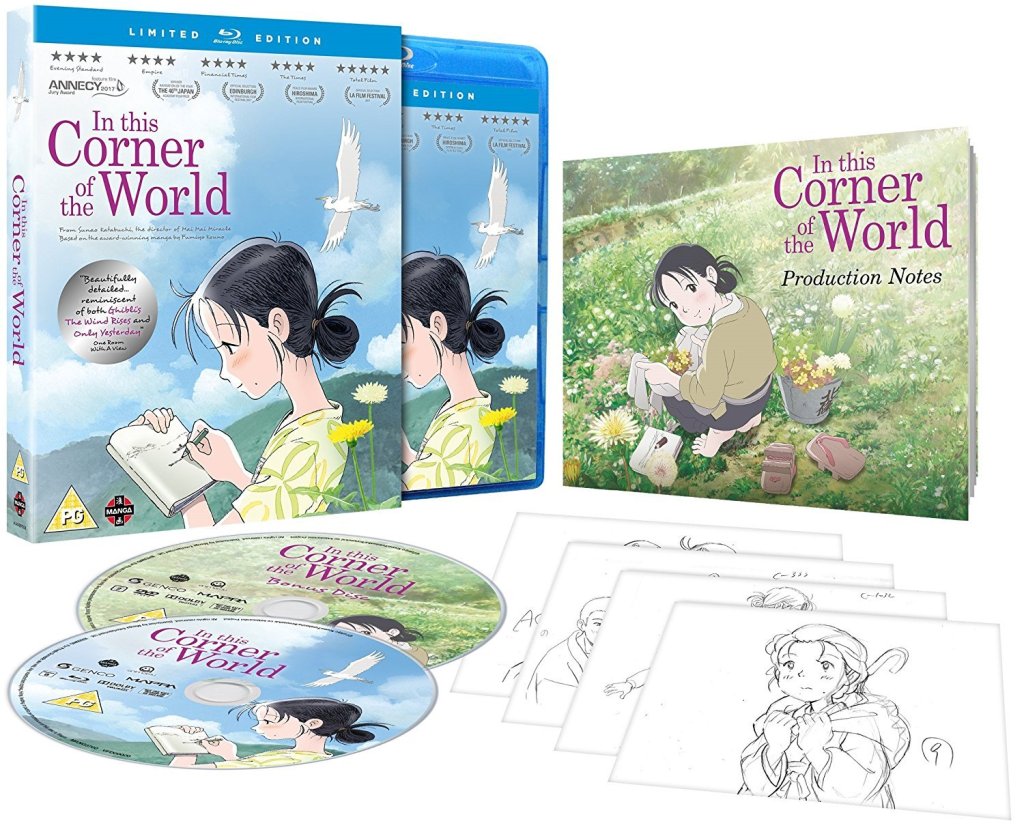 Reminded me less of Grave of The Fireflies (although I did expect that beforehand) and more of Hope and Glory (a more comedic look at wartime from a civilian perspective).