Not wanting to sound to negative each episode, I'll start with a positive. It's a nice change of pace seeing events that take place after 1983.

This arc thus far has clearly been focussed on showing the motive of Satoko. It might just be me, but the show does a very poor job of it. In a way this episode even felt like a filler episode. But despite the strong focus on the negative parts from the point of view of Satoko, it doesn't really work and knowing what Satoko will do to Rika, it remains insanely disproportionate and illogical. Here's a short breakdown:
Now the above does establish a motive, but not a compelling one. If someone goes somewhere where you can't follow them, that would make me sad rather than angry. The only thing in here that makes sense for Satoko to direct hatred towards Rika is the discrepancy between Rika wanting to go to St. Lucia together with Satoko and then ending up spending time with others. Having that be amplified by other negative emotions, like the pressure to continue studying, starts becoming something.

The problem, however, is that they didn't really depict it as such. Mainly because they don't want to make Rika the villain, while at the same time they need to. If they wanted this to work they should've made sure that we, the viewers, fully see it from Satoko's point of view. At this point the requirement of continuing to study to stay in the school didn't seem unreasonable, in fact Satoko doesn't seem to concentrate during class. So it felt more like a natural consequence of her slacking. Rika also doesn't actively prevent Satoko from joining her. It felt a bit 50/50 between Satoko not approaching Rika and Rika caving in to some peer pressure. To drive the point even further home, why not have Satoko be the only one that studied in the middle of the night to make it clear that it would've been unsustainable for her? Or why not let Rika quite clearly exclude Satoko or perhaps try to promise that they can spend some time together at a later date? Or, if you don't want to "taint" Rika's character, why not make it clear that Satoko perceives those things as such? Perhaps with a clichéd dream sequence where Rika is very mean and direct with her?

But as things stand, we have Satoko somehow turning this "motive" into torturing Rika in the worst way possible. Wouldn't it make more sense for Satoko to want Rika to experience the same pain or to persuade her from abandoning her side? Unless they somehow further build up the motive, I can't rhyme the two. Perhaps the idea is that whatever entity grants her the power to loop also further skews her view? Would also allow for a good resolution, the focus shifts on defeating this entity, at which point Satoko regains her sense, they reflect and become buddies again.

As for who that entity could be? 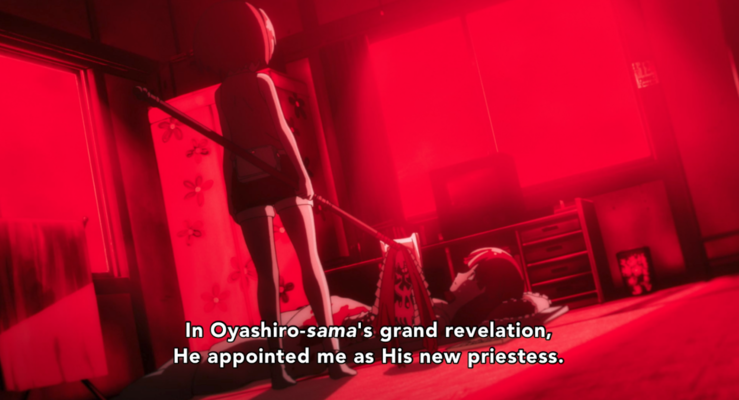 Evil Hanyuu
Also, does anyone know what's happening to Satoshi? I can only guess that having him in the mix would actually give Satoko a reason not to go along with Rika, which didn't fit the narrative, so we simply don't hear anything about him...

IdiomaticLynx said:
Also, does anyone know what's happening to Satoshi? I can only guess that having him in the mix would actually give Satoko a reason not to go along with Rika, which didn't fit the narrative, so we simply don't hear anything about him...
Click to expand...