A great episode this week

Poor Rika this episode She used up most of her loops in this one episode. It seems something or someone is making people L5, as a few characters who never had it before, do

Can't wait to see what next episode brings

They burned through Rika's loops in no time. Really sad to see Akasaka go L5 and kill Rika. Akasaka is one of the few I'd consider to be genuinely good. I also really like the dynamic between him and Rika (not in this episode, though

I have the feeling that the next episode will give us some answers, so this is probably the best time to step up the theory crafting. While this episode didn't seem to provide many new insights due to the pace at which it went through the loops, there's likely a hint or two hidden somewhere. In any case, apologies in advance for the long post. I'm mostly going to summarize some working theories of mine, and might follow it up with more detailed/worked out theories later.

First of all, a table in where I recorded the deaths of the main characters. I tried to only include details that are "certain", anything that is speculative will be in blue.

Now some things to note about the above:
I think we need to focus a bit more on Keiichi surviving every time, because certain things don't add up.

So let's assume that Keiichi is somehow the culprit. What hints do we have supporting this? Well, let's look at some stills of the ED and see which one is the odd one out:

But this won't do as evidence, we need to somehow explain the events of all loops with Keiichi as the culprit in some form or way. I'll only look into the first three loops. This is going to be hard since Keiichi was attacked by Rena, locked up by Mion and hit on the head by Teppei. In all these cases, he was clearly the victim, right?

Oni-damashi
Up until the 23rd everyone is still alive (bar possibly Takano and Tomitake). Keiichi is suspicious of Rena, but Rika tried to calm him down. We see Rena visit Keiichi and plotting to kill him, while Keiichi wanted to apologize for the things he said to her. A fight breaks out and Keiichi ends up with multiple stab wounds and massive blood loss, while Rena is knocked out (dead?) by Keiichi. But is that really what happened? One thing that irks me about it all, is how Keiichi could've survived this:

For his survival it would be paramount that he was found quickly, however, who would encounter them at such a late hour? And in the hospital, why does Keiichi have a neck brace and bandaids on his face? How did he recover so quickly in two days?

If we pay close attention to what Keiichi says to his parents, Ooishi and Mion, we notice that none of it is really specific to the events. In fact, it isn't even clear that it's about a murder. The closest we get is Keiichi stating that he can still remember how it felt when he hit her. But for all we know, something else took place entirely. For example, what if the house caught fire and collapsed on them?

But what about Rika and Satoko? Their bodies were found a day after what happened to Keiichi and Rena, but their deaths might've taken place on the same day (23rd). In other words, it's entirely possible for Keiichi to have killed both Rika and Satoko in the afternoon and in the evening killed Rena. Now the question is: why? We get a hint at the end of the episode that Keiichi has an itchy neck... (further speculation later on in this post)

Watana-damashi
Again it seems that Keiichi is in no position to be the culprit. He ends up locked up in the basement of the Sonozaki main house. Or does he? We again see him perform an incredible feat, breaking down the steel cell door! He doesn't manage to break through the next door, but is luckily rescued by the police.

But the only thing we know about this rescue, is that Keiichi briefly awakens outside when he's on a stretcher. Later when Ooishi visits Keiichi in the park he only states that he's "glad they were at least able to get him out of there safe and sound". Nowhere is it made explicit that he was saved from the basement. (And even if it was, he could've gone there on his own afterwards). Ooishi does state that he might need to ask more questions to Keiichi and hopes he will help out if that happens. You could interpret this as a victim/witness he might know something or... as a suspect.

So how can we create a narrative where Keiichi is the culprit? First off would be Rika. She was last seen talking to Keiichi at the end of episode 7. But at the start of episode 8 there is a jump in time. Keiichi could've drowned her in the septic tank. Satoko is clearly suspicious of Keiichi at this point. Suppose she makes a plan together with Mion to interrogate Keiichi. Mion invites Keiichi over. It's here that what we are shown starts to diverge. Keiichi goes on a killing rampage. Now, this does sort of leave the question how Kimiyoshi ended up at the bottom of the well. All I can think of is that his initial disappearance was due to medical reasons, and upon his return to the village he paid a visit to Oryou.

Tatari-damashi
It's pretty much confirmed (from the POV of Rika) that Ooishi killed practically everyone. So how could Keiichi ever be the culprit? We have to trace Ooishi's steps back. He arrived at the festival with a loaded gun and a baseball bat. This baseball bat was already used and looks an awful lot like Satoshi's baseball bat. How could he have gotten a hold of it? From Satoko's house, where Satoko and Keiichi were. If memory serves me well, the bat was originally stored somewhere in the school, so perhaps Keiichi brought it with him(?)

In any case, we again see things from Keiichi's perspective that doesn't line up. It feels very weird for Teppei to show up out of nowhere (unless he was never arrested and Satoko was somehow allowed to leave for the festival?). On top of that, there are again excessive amounts of blood. But there's something even more peculiar: 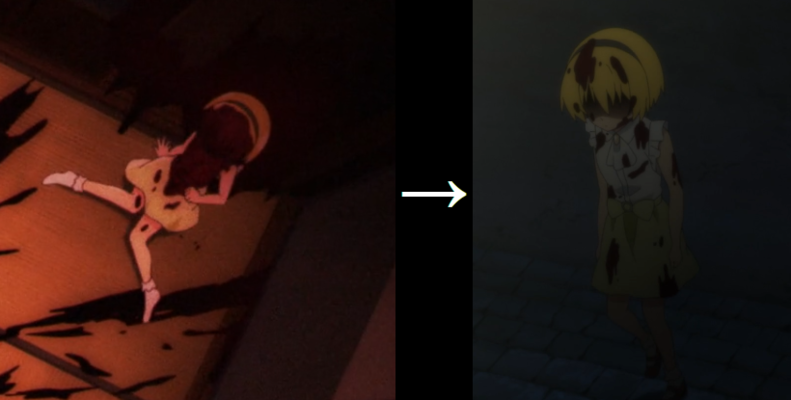 I can imagine that she would wipe off the blood off her face, but she clearly didn't change her clothes. Yet for some unexplained reason, there's way less blood on her. This is yet another indication that what we saw in Satoko's home wasn't what actually took place.

So some event X takes place at Satoko's house involving both Keiichi and Ooishi. I'm sort of at a loss here, but let's just imagine that Keiichi manages to convince Ooishi that the curse is real

Notes
Now this doesn't mean that Keiichi did it. I also have my doubts, especially if we would want to paint him as the sole culprit. And even if he was, there are still many unanswered questions. Though I do think something's fishy.