What a great new episode to start the new year

Ooishi definitely did kill nearly everyone last episode, and it looks like he has gone L5. Though where did he get the bat from?

Poor Rika is now on her own, since Hanyuu has vanished 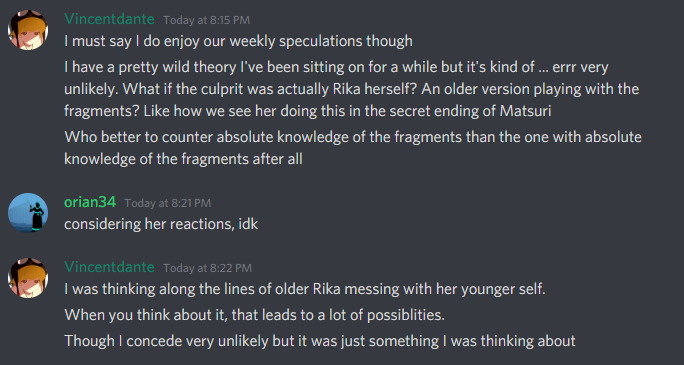 Good episode. We did get to see Ooishi's killing spree. This might sound weird, but it was less awful than I expected (still awful mind you). Personally I think it would've been better to leave it (mostly) implied. On the other hand it gives us some clear information. And there's a lot to unpack. What I gather from it:
Now the big question is how and who "induced" the syndrome in him?

The rest of the episode gives us a lot more insight in Rika's actions. And to be frank, I'm quite disappointed that all Rika did were the small interventions we've seen. Now I get that she is intimately familiar with the fragments and she did what would normally be sufficient. But I simply don't buy that from that point onward you'd not go the extra mile to monitor the whole situation. And even if that would happen the first time, you'd be doubly caution from thereon. Remember, she's pulled back into this nightmare again, Hanyuu hardly has any power left and in the first iteration, all she did was say some words to Keiichi. Even worse is that in the second iteration she was simply "surprised" they hadn't found the body of Tomitake yet.

But alas, that was the approach she took. And now she's lost Hanyuu for good it seems. The existence of the sword that can end the life of those "looping" is a new one.
The sword seems to be the one that was used to kill Hanyuu. In the manga it was depicted the same way, shape and all.
This episode clearly made it seem as a means of "escaping" for Rika, which, given her situation, isn't all that strange. However, to me it immediately gave off another signal, this "sword" will come in handy later on. In other words, someone (or something?) is also looping. The sword being gone could also mean that the "enemy" might poses this weapon as well. This does beg the question, why it wasn't used before on Rika. There are several possible reasons:
Rika giving herself 5 more attempts felt a bit random, but it does sort of make sense to set a boundary.


Vincentdante said:
Also I guess I will post one of my theories here as well
Click to expand...

One key element I think we both agree on. The antagonist must be someone with knowledge about the previous iterations. It's highly unlikely that without this knowledge Rika could've been fooled so easily. I'd argue the naming of the arcs "...-deceiving" is also indicative of this. It appears to be one arc, while ending up to be different and presumably very different under the hood.

The only way I could see someone without prior knowledge pulling this off, would be to wait till Rika made her move and then start your own plan. The only problem is that Rika's moves are in and off themselves very small and seemingly inconsequential. Whispering something in Keiichi's ear to ensure he gifts a doll to Mion, is not something any random person would perceive as "a move".

The other way would be that it's just "coincidence" and while there's no real counter for that, it would be a massive disappointment. So disregarding that option, our antagonist really must have prior knowledge.

Rika, Hanyuu or any derived entity of either of them would do. At one point I speculated Frederica Bernkastel (not the witch Bernkastel) for the exact same reason of needing to know the arcs intimately to "deceive" Rika. (discussion thread for episode 7). Wanting to tie it to the witch Bernkastel (and thus to Umineko) still seems to fall flat for most of the same reasons. But disregarding this tie, she could do it.

But as fitting as it would be, I have the feeling it must be someone else. It could either be one person (possibly a looper) that operates on the meta level as well. Or, the meta level representation differs from the in-world one. Regardless, I think it should be someone we already know (although, possibly only by name/mention). If it would be some completely random and new entity, then that sort of ruins the Mystery of the story. Not to mention that it would still need a very good explanation of how that entity gained the knowledge needed to pull this off and a convincing motive.

On the subject of connecting things to Umineko. Some people like the theory that Hanyuu is Featherine. One key argument is the damaged "memory device", where the damage seems to align with the crack on Hanyuu's left horn. Now it could be coincidence, but when talking about granting Rika the ability to remember who killed her, the camera focused on Hanyuu's damaged horn, emphasizing the link between memory and her horns(?).

Now we could go on and speculate that Higurashi is thus a game board with Featherine (as Hanyuu) as the game master, but due to the damage to her memory device, not aware of the full scope. The original story of Higurashi then occurs, where Rika and Hanyuu focus on "escaping". However, the real goal of the game board might not have been the survival of Rika. This aligns with Lambdadelta's description of Bernkastel's past that the gamemaster lost sight of the goal. It could very well be that the game board hasn't been solved, which caused Rika to be pulled back in without knowing how to truly escape. But there'd still be two big hurdles: Firstly, how will this translate to a timespan of centuries as opposed to the 100 years and counting at this point. Especially now Rika seems set on only giving it five more attempts and having a means to "give up". Secondly, where is the "ill will" of Hanyuu and where is the "logic error".
There are two further things that I find noteworthy, but don't have any concrete theories on: