Back in January of 2016 A-1 Pictures worked on several different shows for that winter season, such as Erased and season 2 of GATE. They were also adapting the fantasy series Grimgar: Ashes & Illusions, or Grimgar of Fantasy and Ash, the name given to the manga and light novel series in translation. The series aired at a time where Funimation were big in the streaming space and not offering a service in the UK, so we missed out on it. Thankfully the series is now on Crunchyroll and, more importantly, has just been brought to the UK thanks to Anime Limited – whose release I am here to review! 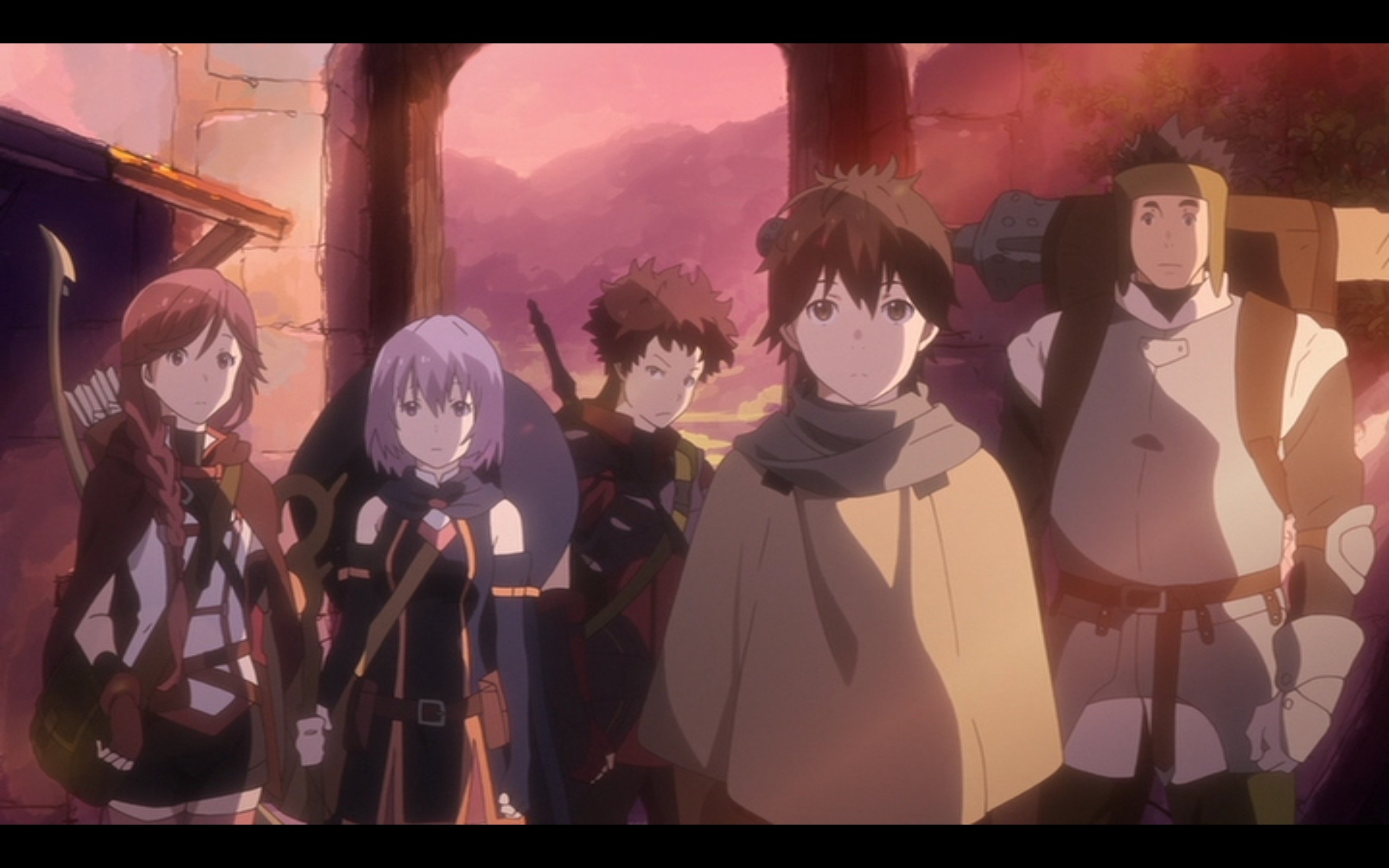 The story follows a group of people who suddenly find themselves in a fantasy world with no memory of their previous lives or where they came from. In this world the only real way to survive is to become a volunteer soldier, someone who hunts down monsters and profits from selling their loot. This is the job that protagonist Haruhiro takes on, alongside four others: Manato, Yume, Shihoru and Ranta. Together the five form a party and risk their lives day after day to survive in this harsh world. With death only ever a single mistake away, will the team ever be able to live out their days comfortably?

You might be reading this thinking that Grimgar’s setup is fairly generic, and frankly I can’t argue that it isn’t because it fits into the isekai model of ‘transported to a fantasy world’ almost too perfectly – but while the beginning might be generic, the series more than makes up for it with its characters and realistic approach to the situation. 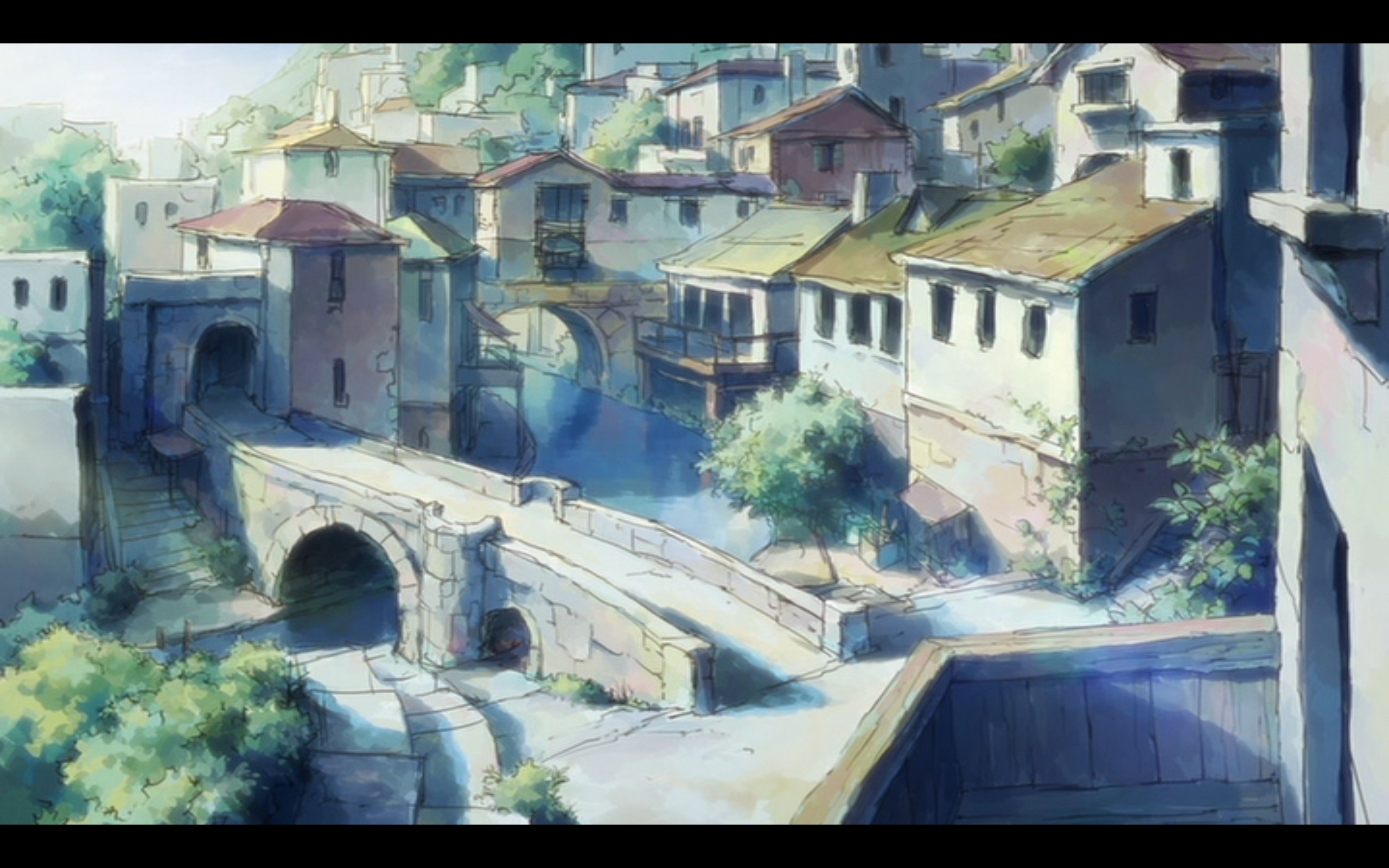 Haruhiro and his friends don’t turn into overpowered protagonists. There is always a real fear that someone could die because they’re all human and putting their lives on the line every time they take on a monster. Although everyone in this world can join a guild and learn skills (for example, Haruhiro becomes a thief and acquires abilities like Sneaking), they have to work hard to perfect them and it’s not something that happens overnight. Yume decides to become a hunter, which is a job that requires using a bow and arrow, but despite learning archery, Yume still misses her mark a lot of the time. It’s the small things like this that keeps the cast grounded and the world interesting.

Another major way that the series feels realistic is the amount of money our heroes gain every day. Early on they sometimes earn nothing at all if the weather is bad or if they can’t find easy targets to take out, but even after they’ve found a groove, Haruhiro often comments that they don’t have enough money to cover simple necessities like new underwear and meat to eat. By the middle of the series they’re in a better financial position but even then it’s quite a humble way of living, which I think is very important for Grimgar. I sometimes find it hard to get into stories where the cast fall into an alien world and are suddenly overpowered or find themselves rolling in cash, so I’m glad a series like Grimgar exists that offers a different perspective on this kind of story. 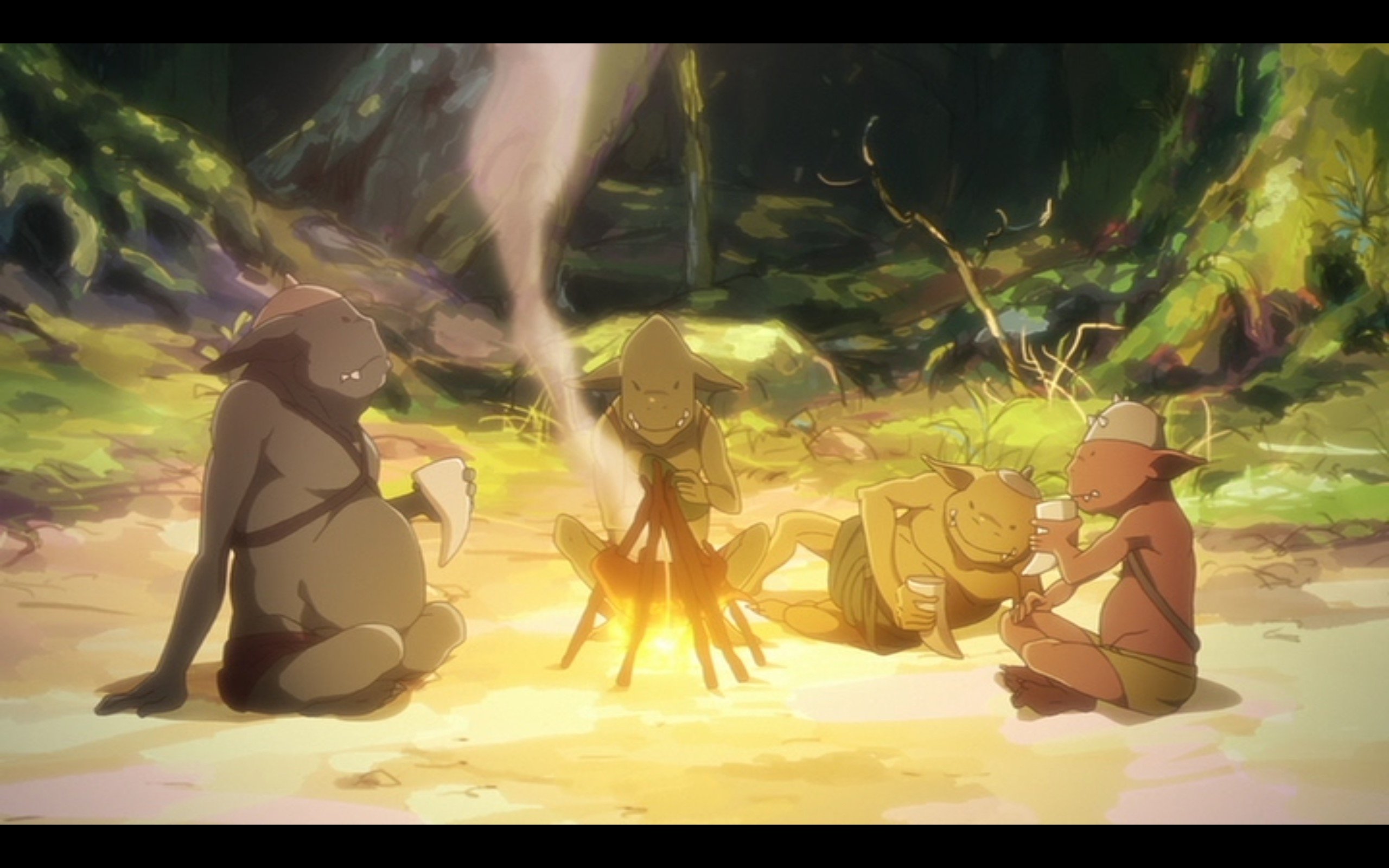 The cast of characters overall are well-rounded. Haruhiro is is the leader of the group but he spends most of his time second-guessing himself and the choices he makes. However, for all of his indecision, Haruhiro always comes through in the end. Manato is a priest and someone who always sees the positives in everyone else. He’s very much a people person and can make everyone feel at ease just by being present. The hunter, Yume, is the ditzy, cultsy character who often muddles her words and has a tendency to say the worst thing in the moment – but overall she’s a very caring member of the group and perhaps the most reliable beyond Manato. The other female of the group, Shihoru, decides to become a mage and is probably the weakest character in Grimgar. She’s an extremely quiet character who only really opens up to Yume while shying away from the boys. Because Shihoru rarely speaks, she never really gets much development, so despite being a likeable enough character, she sadly doesn’t leave a lasting impression. The last member of the party is Ranta, who probably leaves the worst impression on me. While Haruhiro might be mild- mannered, Ranta is irritating more often than not. He makes thoughtless, often perverted comments to the girls as well as being argumentative with Haruhiro. Deep down, Ranta probably respects his leader but if anyone is going to get on your nerves, he’s definitely the character to do so. 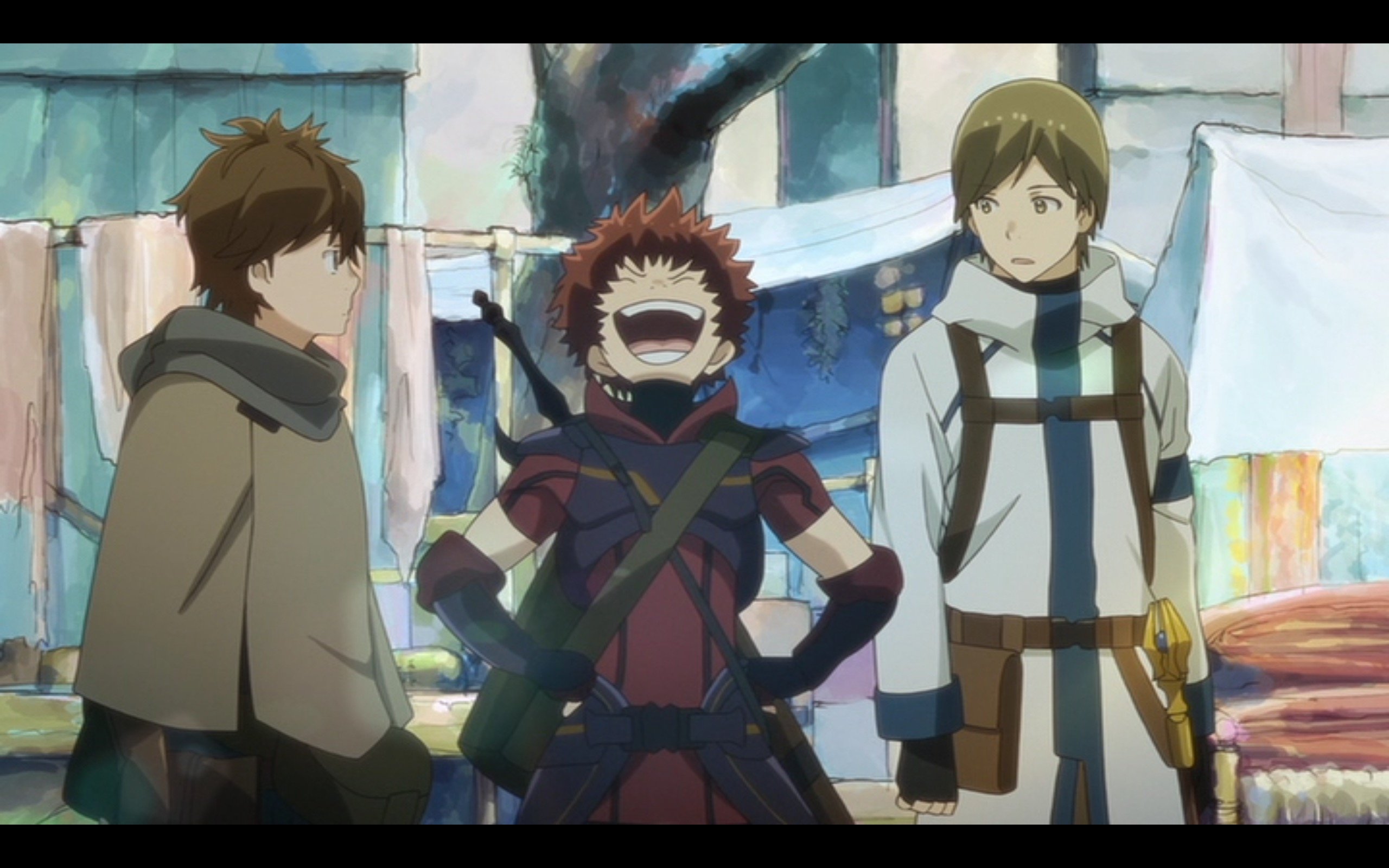 The anime is based on a light novel series that’s still ongoing in Japan and being translated into English by J-Novel Club. Having now read the books it’s interesting revisiting the anime and seeing what the differences are. The 12-episode anime covers the first two light novels (of which there are currently 11 in Japan) and nothing of note has been left out of this adaption. What’s notable, however, is that many of the interactions between Haruhiro and Manato later in the series are original to the anime. Despite this, these extra scenes don’t feel forced; if anything they offer a lot more depth and insight into the friendship that the two share. I’ve noted this because the original light novels were already well written and it’s nice to see that A-1 were capable of matching the same standard of quality.

The animation for the series is handled by studio A-1 Pictures. Grimgar is a beautiful series with a mix of A-1’s smooth character designs and jaw-dropping watercolor backgrounds that are bursting with a wide variety of colours. It’s a style I’ve not really seen used in a series like this before and it helps Grimgar stand out in a crowded genre. The action scenes are well choreographed and weapons often have a neat after-effect added to them during battles. There are also interesting first-person perspective shots during some of the battles, which I found a nice addition. Everything just comes together extremely well. 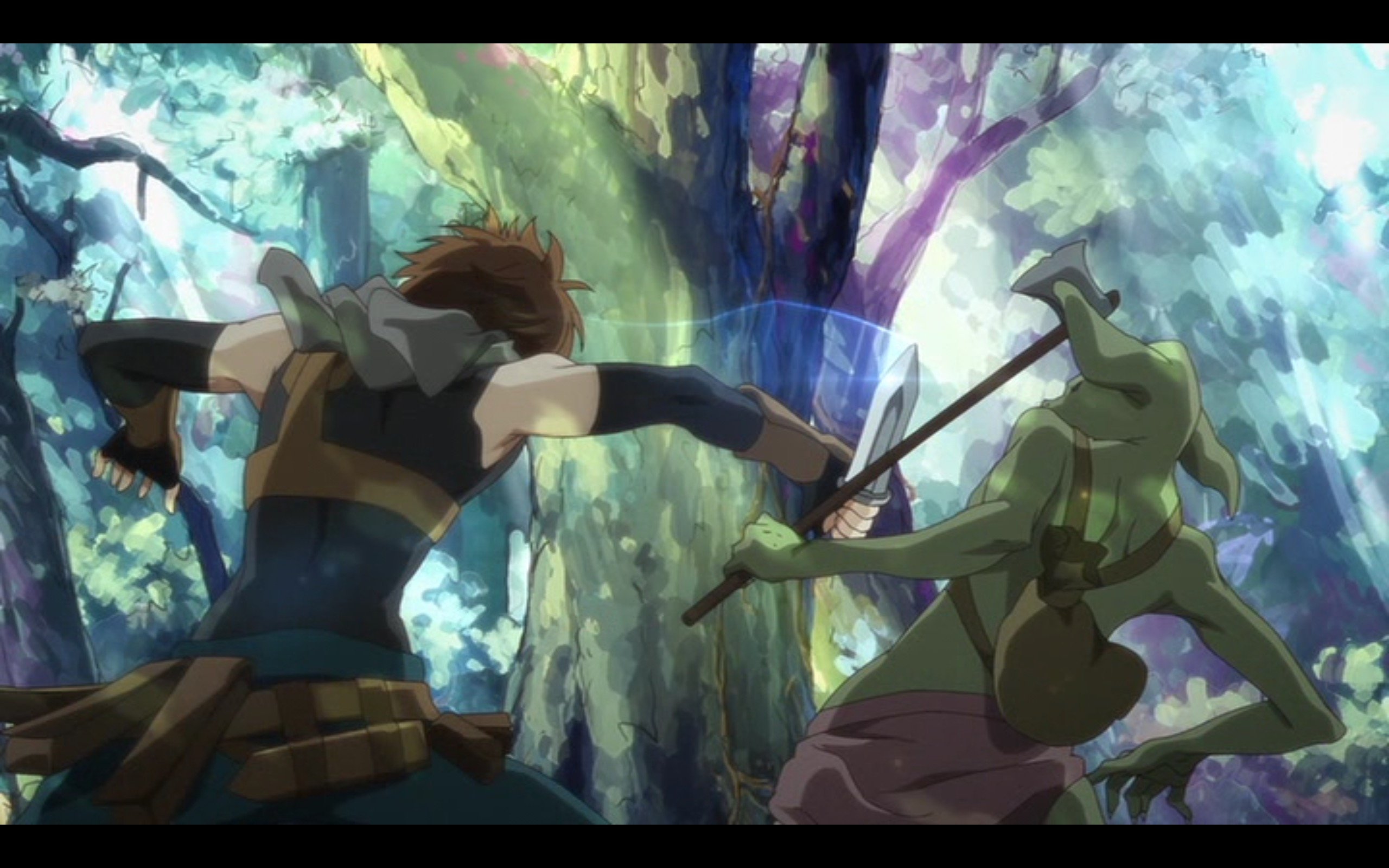 Grimgar’s music has been composed by R.O.N (the composer for Kuroko’s Basketball) and the soundtrack has over 40 tracks used throughout. These range from light acoustic guitar melodies to more emotional piano pieces – even right up to borderline hip-hop music. There is such a wide variety on offer that nothing becomes overused and everything slots into the anime really well. It’s also a nice soundtrack to listen to away from the show! Both the opening, “Knew Day”, and ending, “Harvest”, are performed by (K)NoW_NAME, who also perform a number of insert songs for the series. All of the songs on offer from the band are catchy tunes that stick around in your head long after you finish watching Grimgar itself.

Where voice actors are concerned the cast is large enough where it’s impossible to mention everyone, but I can say that the Japanese cast do a great job. My favourites among them are Yoshimasa Hosoya (Azumane Asahi in Haikyu!!, Fumikage Tokoyami in My Hero Academia) who voices Haruhiro and Hiroyuki Yoshino (Seishiro Hiragi in Seraph of the End, Taro in Shirobako) who voices Ranta. These are the characters that play off one another the most and the chemistry between the actors comes through in their roles really well. What’s more, anyone who can play a character as annoying as Ranta and yet still give such a strong performance definitely deserves some respect! There is also an English dub on offer for Grimgar and having sampled the first couple of episodes, it’s certainly not a bad one. Haruhiro is played by Ricco Fajardo (Nozel Silva in Black Clover, Jackal in Fairy Tail) and approaches the role confidently without putting too much of a forced ‘hero’ tone into his acting. The voice doesn’t quite fit the mild-mannered protagonist as well as the Japanese but honestly if you’d rather watch it dubbed then there certainly aren’t any real issues present beyond personal preference.

This release comes to the UK thanks to Anime Limited as a Blu-ray Collector’s Edition and a standard DVD release and contains all 12 episodes of the show. On-disc extras include a 2.5 OVA episode, trailers, and commentary for Episode 4. The Collector’s Edition comes beautifully packaged in a rigid case and includes a 40-page hardback artbook that has character profiles and a lot of artwork from the show. This book lends itself to feeling like a premium item due to it being hardback instead of the usual paperback booklets. If you’re a fan of the show then it’s definitely worth investing in! Overall Grimgar: Ashes & Illusions might seem like just another entry in an overcrowded genre but thanks to some quality writing and love from A-1 Pictures, it stands out as one of the best. Even if you’re feeling burnt out on isekai titles, I’d strongly recommend that you give Grimgar a chance. Despite the light novels being ongoing, the TV anime comes together to offer a complete enough tale to be thoroughly enjoyable and leave you feeling content. Grimgar is a quality series the likes of which doesn’t come around very often and when it does, you should grab it with both hands.