Here is the table where the conferences will be shown (cheers Jaden): 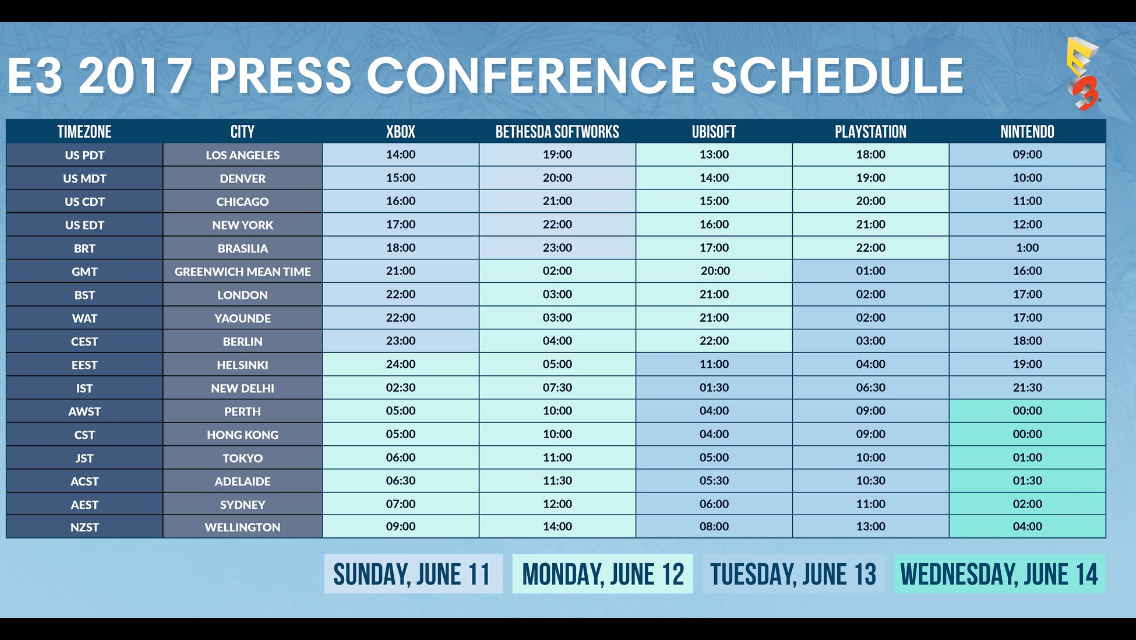 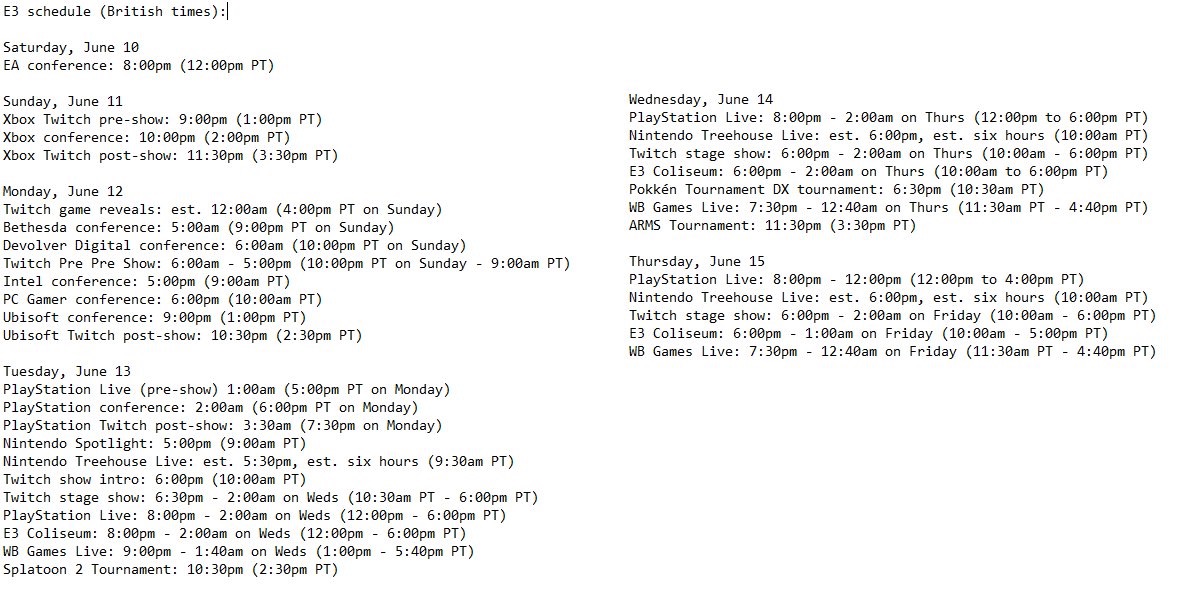 A Way Out
EA Originals title
Early 2018
From the creators of Brothers: A Tale of Two Sons
Co-op experience in split-screen and online

Star Wars: Battlefront EA II
Finn & Captain Phasma will be available plus a map from The Last Jedi will be free
Free content planned

Xbox One X (the official name for Project Scorpio):
November 7th for SRP $499.99
4K Gaming, HDR, Ultra HD Blu-ray playback
Smaller box than the other Xbox One systems
All controllers and accessories for Xbox One will support One X

AUKN Staff
An astoundingly lackluster press conference from EA. Only thing I really cared about was the new Need for Speed and the tease of the new Bioware. I don't expect much considering the amount of sports they have to go through every year, but even by their normal standards this was lacking. Very surprised by the lack of the as of yet unnamed Visceral Games Star Wars project, makes me wonder if that game is running into some development issues or something. It's been in development for ages yet we still don't even have so much as a title for it.
Last edited: 10 June 2017

Yeah I stuck the EA conference on as background noise and it still managed to bore me. The new Bioware game could be cool so I'm interested to see more of that at the Microsoft show but man that was rough.

A Way Out looks a fun co-op game, I like what I have seen so far so will keep an eye on it. Can't wait to find out more on Anthem as I'm interested in it and I like Bioware games. Happy to see Star Wars Battlefront 2 will have a story this time around which is the reason why I never got the first game.

Will there be any chance of putting links to the Youtube lifestream of the other E3 conferences in the first post Grav? Interested in watching the Sony and Nintendo ones without getting spoiled.

Rena Ryuugu said:
Will there be any chance of putting links to the Youtube lifestream of the other E3 conferences in the first post Grav? Interested in watching the Sony and Nintendo ones without getting spoiled.
Click to expand... I don't want to get too hyped for this, as it's probably still a few years away, but it looks amazing!

You can view the live conference over on Twitch and YouTube.


Xbox One X (the official name for Project Scorpio):
November 7th for SRP $499.99
4K Gaming, HDR, Ultra HD Blu-ray playback
Smaller box than the other Xbox One systems
All controllers and accessories for Xbox One will support One X

Good lord I am so damn hype for Dragon Ball FighterZ, it looks like bloody MvC but with Dragon Ball characters!

Ori and the Blind Forest was phenomenal so I'm really looking forward to sequel.

Code Vein is anime souls so I'm interested in it at the very least.

The Last Night had an aesthetic that is very much my jam so I'm interested.

Anthem looks like it could be incredible but I'm not letting myself get too hyped for it.....

As for the Scorpio, meh not at that price.

All in all it was a decent enough show that showed a bunch of games I'd like to play, but here's the thing, I can almost guarantee I'll be playing none of them on my xbox one. :/
Last edited: 12 June 2017

AUKN Staff
I see that Bethesda have done little to really justify their own conference again this year. I haven't played Wolfenstein The New Order, but The New Colossus looks cool, but everything else was just kinda meh. I don't have a VR headset, so I don't care for any of that stuff, I have no interest in buying Skyrim for a billionth time for the Switch, so that's out and I never played The Evil Within and heard it was generally not great. Granted, I'm willing to give the sequel a chance, but I'm not holding my breath.


Beyond Good & Evil 2
Re-announced after its troubled development cycle. Now set before the events of the first game and features a new cast of characters. No formats or release date announced.

Other games shown were The Crew 2, Assassin's Creed Origins, Far Cry 5, and South Park: The Fractured But Whole.

AUKN Staff
A surprisingly good conference, if I do say so myself. Ubisoft can be pretty hit or miss, but them keeping Assassin's Creed down to a minimum and giving the cringe lord Aisha Tyler the boot definitely improved things a lot. Mario and Rabbits looks like something out of a fever dream and I love it, will certainly be buying that on launch. Skull and Bones looks interesting, but I didn't take to the AC boat stuff, so I'm out on that one. No idea what in the hell Transference is, but that trailer was utter madness and I loved it for that alone. Far Cry 5 has my interest, I skipped 4 because it looked quite similar to 3 but this looks like it's different enough to warrant a purchase. Biggest surprise was of course Beyond Good and Evil 2, which I'd written off as vaporware at this point, so it was good to see that back, although we got a CGI trailer last time to no avail, so I'm definitely keeping expectations tempered until I see gameplay. Very smart move to make it a prequel given it's a new entry into a kinda obscure franchise that has had one game released 15 years ago.

Bethesda - Looking forward to more Dishonored and Wolfenstein, the rest is a big ol meh.

Ubisoft - This was a pretty solid show tbh, I mean I'm probably not gonna be playing an awful lot of the games but it was still a decent watch. That Beyond Good and Evil trailer was fan-bloody-tastic, so consider me interested for sure.

Now to wait for the conference that I actually care about and will no doubt be the worst of the event knowing my luck.

Sony was really underwhelming. Other than Monster Hunter and the Shadow of the Colossus Remake it was all titles we knew about and all of them are coming in 2018 or don't have a date pretty much.

Is anyone else done with games like Days Gone, Uncharted, Last of Us II, Spiderman, Assassins Creed, Horizon, GTA, Red Dead etc?

I'm personally so tired of Open World games, I feel like every major title these days is an Open World game and many have Zombies or some equivalent.
Like how many Demo's do we need of a character traversing terrain while trying not to be caught and eventually sneaking up on a group undetected and then taking them out in some fashion? Because right now that feels like what all these Open World games are, just sneaking around and killing people or the like. It's so ******* boring.

Honestly Days Gone while looking graphically very impressive looks like the most generic boring ass thing, nothing about it is original or interesting at all.
I get the feeling modern AAA games are making me more and more Jaded, it's been along time since any AAA title has really interested me at all, Horizon is the one I think I'll try if only because it weirdly reminds me of Princess Mononoke.

I think I just like simpler less cinematic games. While most of the Bandai Namco Anime games are certainly less cinematic and grandiose they are undoubtedly game ass games and that is the generation I'm from. When games were first and foremost games, be it platformers, simple racers or basic FPS'. Maybe I should try Nintendo again, I mean I did love MK8 a whole lot.

AUKN Staff
Can't help but agree with @Blaize, Sony was really weak this year. Most of it comes down to a total lack of new announcements. You had Monster Hunter, which was cool admittedly, but apart from a couple of VR games, there was really just nothing. Spiderman looks neat but has a few too many QTEs for my liking. In terms of the conference itself, I think Sony is going way too far with the lack of people coming out. Yes, you can have too much talk, but you can also have far too little as well, and this was just a glorified trailer reel, there was no real need to have a conference at all.